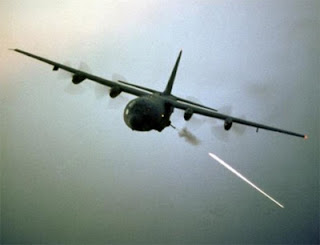 The Armed Forces exist primarily to buy increasingly expensive equipment in order to keep high-paid industrial workers in jobs and to keep arms dealers (aka the defence industry) in the luxury to which they have long been accustomed.

That much seems ever-more evident with the latest initiative from the Defence Industries Council (DIC) which is today launching a high-profile campaign seeking an increase in defence spending.

The particular focus of attack, however, conveyed via The Guardian, is to complain that, as commitments in places like Iraq and Afghanistan have grown, the financial resources have not grown to the same extent.

Now, says Mike Turner, chairman of Babcock International and the DIC, "there is the danger that because the government has to meet commitments for Afghanistan, in five years' time there is not enough money left over for other projects."

Ian Godden, chief executive of the Society of British Aerospace Companies, admits that in today's economic climate defence was a "socially unacceptable" word, which for many people made a far less deserving case for public spending than education and health. "Politically it has not been a priority despite the fact we are fighting wars."

He adds that industry had been slow to fight its corner. "We have been too quiet as an industry," he said. "If we did speak out we would be criticised for looking after [our] own interests. Industry has realised it's time to talk about this."

However, the real agenda is more than transparent when Turner declares that, if spending is cut, British defence manufacturers would have to scale back their UK operations and imports of military hardware would rise. Once "Our Boys" start driving around in US-made tanks or flying French fighters, "you also lose public support for spending on armed services" and spending is cut further, warns Turner, "you're into a catch-22."

With British troops firing rifles built by a company now owned by Germany, with Belgian-built machine guns, driving Swedish-made Vikings (soon to be replaced by Warthogs, made in Singapore), patrolling in Italian-made Panthers, their way cleared by Israeli and US-built UAVs, while they await their new US-built Ridgebacks and their supplies are delivered in Austrian-built MAN trucks, brought to theatre in US-built C-17s and C-130s, one might feel that Turner, whose company builds the Jackal, is on a losing wicket.

With all that foreign kit being used to fight real wars, though, one gets the impression that DIC's main concern is that we should stop fighting these messy little wars so that we can get back to spending the defence budget on "proper kit" - British, of course - for the defence chiefs to play with, and to keep our boys and girls in the factories fully occupied.