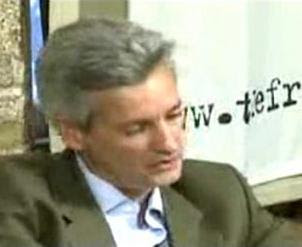 Yesterday, Stuart Tootal offered his insights into the campaign in Afghanistan at the Frontline Club. Unfortunately, he chose not give a presentation but instead took the easy way out and opted for an interview format, answering questions from Patrick Bishop and then from the audience. This made for a disjointed and somewhat incoherent dialogue, with no unifying structure.

He opened by stating his belief that the conflict was "winnable", citing the "Briggs plan" for Malaya, arguing for a greater sense of mission and purpose. You need to build up the Afghan forces and while you do that, you need more Nato troops.

If we lose in Afghanistan, it will not be in the arid plains of Helmand or in the foothills of the Hindu Kush, but in capitals like London and Washington. It is vitally important that the domestic public area in countries like the US and this country understand and support the mission in Afghanistan. Unfortunately, says Tootal, we don't have a publicised, joined-up strategy that makes sense.

The fault that the message is not getting across lies ultimately with the politicians. But to get the message over requires courage, which Tootal implies is missing. Soldiers don't want sympathy – they don't want pity. They just want support. But the last thing they need now is for the public to "wobble" on them, to suddenly start questioning their mission.

Asked how he measures success, Tootal focused on Helmand, and then Musa Qala, stating that, if you secure an area properly, people would turn against the Taleban. "There are a number of metrics where you can build a data argument," he says, you can draw out "certain parameters" as long as you focus on areas. As you "focus on one area and then another, they begin to join up."

Asked whether we were winning, Tootal answered by telling us that, "The British Army is doing a fantastic job." He then went on: "Whether its got enough equipment or not is a big question mark and I personally believe there isn't enough equipment and there are not enough troops there. But they're doing a remarkable job with what they've got."

What people need to be clear, he said, is that the Taleban are taking a beating. They've been pushed back from the district centres. We hold five centres. They have been stabilised to an extent and they are no longer under conventional attack. That is an effect and a mark of success. The Taleban are under pressure which is why they have moved to a more asymmetric form of attack - the roadside bomb. That is an indication that operations out there are having an impact.

Tootal was then asked, given the lack of security, how he could achieve reconstruction and development. Difid, said Tootal, was incredibly poor. If they could not do it, then give it to the Army. The whole development bit needed to be "substantially thought through". A special representative in the audience, however, disputed the idea that we could win hearts and minds by "building things" was misplaced. It was all about "security and governance" and "sustainability".

Instead of turning up and making promises, Tootal countered, you need to do small things which make the difference – the "grass roots" approach.

We're now playing catch-up. We took our eye off the ball with Iraq and we did not put enough resources into Afghanistan. He then diverted into helicopters, dismissing the statistics game, complaining that many of the airframes were "old, knackered Sea Kings", with limited lift.

No one took him further on this, but sure enough, that is what has made the headlines. No mention was made of the Carson blade upgrades which did not appear until long after Tootal had left.

To what extent, therefore, Tootal is living off past glories is moot. He certainly was not able to offer an overall strategic view, instead offering narrow, "fixes" which did not seen to take into account current developments. When he claimed that we held the district centres, for instance, did he really have Sangin in mind when he argued that they had been "stabilised to an extent"?

We got an hour into the "discussion" and there was another half-hour to run, but attention waned. Tootal seems to reflect the general malaise in Afghanistan – a lack of coherence and confusion. "We need the right resources" says Tootal. Right. Is it winnable? A matter of resources, is the message.