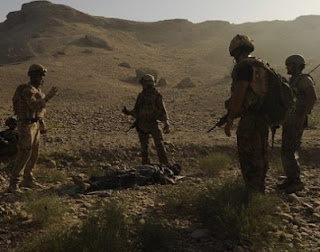 Doug Beattie is back in print, this time with another book to sell. So, for a change, he offers a narrative of almost unremitting negativity, under the heading: "The descent of Britain's Afghan campaign into a Vietnam-style madness".

Doubtless, it is a good book – the last one was – but this is the same Doug Beattie who recently was telling us why we must hang in there and finish the job in Afghanistan. Reading his current account though – and indeed the first book – you cannot fail to come away with a sense of the utter futility of the campaign, to say nothing of strongly signalled presentiments of failure.

In assessing his call to finish the job, we called for strategy, not blind faith. Now, with the emergence of General McChrystal's assessment report, strategy is firmly on the agenda – in the US media, at least – turning a little-known solider into an instant hero, with earnest hagiographies in the likes of Newsweek.

Only gradually did it emerge that McChrystal was not so much offering a new strategy as a continuation of a strategy agreed in March by the incoming president Obama. That event was reinforced with 21,000 extra troops drafted in to take territory from the Taleban, the first of three phases labelled with the deceptively simple title of "take, hold and build".

Taking, though was the easier bit. To hold that territory requires a two-tier approach – providing coalition troops while expanding and training up the Afghan National Army which would eventually take over. That would require still more troops, even though Obama signalled as early as July that he "wasn't inclined" to send more combat troops to Afghanistan.

That may well have precipitated the "leak" of the assessment report to the Washington Post and the coordinated publicity campaign which was clearly aimed at bouncing Obama into agreeing to raise manpower levels, even though no formal request had then been made for extra troops.

Now, however, we learn that McChrystal has placed a formal bid with his Defense Department, in the upper range of expectations, at 40,000. The call is being backed by Britain's top general in Afghanistan – Lt-Gen Jim Dutton - in the hope that the British government will follow suit and send some more of its own.

Dutton tells The Times that victory was a matter of "straightforward force ratios". "If you want to achieve long-term stability, and therefore a lack of terrorism potential in an area, you need to be doing more than simply patrolling the skies," he says. "The ultimate answer to this problem is a stable democratic state of Afghanistan in which their own forces are capable of maintaining the rule of law and security."

Already, it has emerged that Obama was having second thoughts about precisely this "counterinsurgency" strategy and was considering an alternative "counter-terrorism" strategy, the so-called "whack-a-mole approach", achieved mainly by patrolling the skies with armed UAVs.

Next, though, we find out that Obama's March strategy review, which culminated in putting McChrystal into position, wasn't a strategy review after all. The decision to send 21,000 more troops, thought to be directed at implementing the strategy, was "made hurriedly within weeks of coming into office to stanch the tactical erosion on the ground and provide security during Afghan elections."

Through the good offices of vice-president Joseph Biden, we are now having the strategy review that we did not have in March. McChrystal's request for more troops will not even be put to the president until the review is completed, and the world marks time until a decision is made. Unsurprisingly, US defence secretary, Robert Gates, has now revealed that the review could take several more weeks.

On the other hand, examination of McChrystal's not-a-strategy shows it to be remarkably similar to Petraeus's "surge" template, which achieved some success in Iraq, although under very different conditions. Not least, in Iraq, the national army came of age and – albeit with considerable help – proved capable of taking the load. As regards the Afghan National Army, even the staid Jamestown Foundation has its doubts, while Captain's Journal has no doubts at all. The Afghan army is "horrible".

Perhaps conscious that relying on the Afghan army is not a quick-fix solution, secretary Gates has dismissed calls for a timetable for withdrawal. "The notion of timelines and exit strategies and so on would all be a strategic mistake," he says.

All these developments have left the UK rather out in the cold. UK commentators have tried to engage in the debate, but they are reporting rather than participating. There is no political traction here and the real debate is across the pond. By and large, therefore, our media confines itself to the only things it can do well, emoting, reporting on bickering generals and bitching about equipment shortfalls. Intelligent debate has become a rarity - nothing new there.

Thus, while Beattie writes of, "The descent of Britain's Afghan campaign into a Vietnam-style madness", the situation can be summed up more succinctly as simply a descent into madness. The Vietnam parallel is not necessary. Casualties will continue to mount, more attempts
will be made to sort out the election results – while Ban Ki-moon complains about "the level of uncertainty" - and the Taleban carries on causing havoc.

And madness will prevail.