Why we're getting it wrong 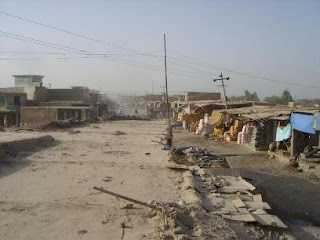 Following on from Stephen Grey's critique of the campaign in Afghanistan, sociology professor Anthony King offers his own observations about the capabilities of the British Army, in a piece entitled "Why we're getting it wrong in Afghanistan".

King is an interesting observer, having carried out several studies of the British military, and he is thus better qualified than most to contribute to the ongoing – albeit limited – debate about the performance of the Army.

In framing his own critique, he picks up on Grey's identification of the role of the institutional culture of Britain's armed forces: "cracking on" - the unshakeable determination of Britain's troops. Says King, the British army's determination to "crack on" in Helmand may be brave, but foolish.

Grey is right, according to King, in asserting that the ethos of "cracking on" is the army's greatest quality; effective armies require fortitude and morale in order to endure the losses that they will inevitably suffer. Yet, as he notes, it may be the army's greatest weakness too.

King tells us that he has worked with the British armed forces for the last five years, watching them on operations in Kabul and Basra. From that experience, he says, it has become clear to me that the culture of "cracking on" may not mean merely that British troops from the Somme to Sangin have dutifully enacted orders which they know to be poor but, more seriously, it affects operational command itself.

Rather, he observes - as Grey notes - British commanders have blithely conducted missions in Helmand despite a woeful lack of intelligence about the theatre and knowingly inadequate military resources for any realistic chance of success.

Now follows King's analysis, which is more than a little illuminating. During their initial training at Sandhurst, he notes, army officers are taught to retain the initiative: when they are confronted by the immediate presence of an enemy, it is better to do the wrong thing decisively than to do nothing at all. Passivity almost always leads to defeat, while determined, concerted action - even if initially implausible - can often unhinge opponents.

Thus, on recurrent exercises primarily based on conventional warfare, the centrality of activity, of tempo and offensive action - of cracking on - is repeatedly emphasised to trainee officers. At the tactical level, this prioritisiation of action and initiative is surely correct, imbuing a robust work ethic in Britain's armed forces which is appreciated and valued by their allies, like the US. From the Balkans to Afghanistan, multinational commanders have looked to British troops to carry out tasks that other nations have been reluctant to perform.

The trouble is though that the same ethos of action is evident at staff college where officers are trained for operational command. Although the concept behind Britain's Joint Service Command and Staff College (created in 1997) was innovative, the institution was imbued with traditional British military culture. It was and remains a testament to "cracking on."

Giving students little time for thought and independent reading and research, the college seems to replicate a conventional military exercise in which the speed and quantity of output is prioritised over quality - and potentially incorrect action over cautious contemplation. The result is that Britain's operational commanders feel the need to act and impose themselves on any situation.

More worrying still, says King, British commanders often have a narrow concept of the ideal form of military action. Despite well-worn claims to expertise in counter-insurgency, the British army actually regards conventional military combat as the ideal - and indeed ultimate - test of their professionalism. Like Clausewitz's military genius, British officers today want to test themselves under "the most murderous fire."

This encourages the premature and excessive use of violence despite wider the political situation. In June 2008, Brigadier Mark Carleton-Smith judged the Taleban insurgency to have been defeated (at least temporarily) as a result of a series of decapitation missions by special forces he had commanded. But by the end of the tour in October, he took a rather different line, arguing that this was a campaign which could not be won by the very military methods which he had advocated only months earlier. British commanders are prone to confusing local tactical superiority with operational success.

Even now there are inadequate numbers of troops in Helmand. However, rather than tailor the campaign to their resources, commanders have consistently "cracked on"; seeking to dominate the whole of Helmand, a hostile province the size of Wales, with just a few thousand troops, and dispersing their forces across the province into small, isolated platoon and operating bases.

Even in the Sangin Valley, King observes, where there are several significant positions, the British bases cannot mutually support each other; they are too far apart, while Musa Qaleh is some twenty miles away to the north. As British commanders in Sangin have themselves noted, troops in these locations "sit in a bubble," and this inevitably means they are engaging in numerous firefights.

Institutional factors within the military establishment seem to have further encouraged this preference for "cracking on." Never easy, tensions between the services have become increasingly strained over the last decade as a result of declining defence budgets and, as they approach the future defence review in 2010, these frictions have reached a crisis point. Each service is desperately seeking to protect itself from cuts; furious and bitter arguments have been reported, with each service trying to undercut the other.

And intense tactical activity in Helmand has become a potent tool in this competition: it is very difficult to cut regiments that have fought hard and suffered numerous casualties in Helmand. Budgetary pressures, then, have actually precipitated a preference for high-intensity war-fighting in Helmand - a pathological institutional reaction to chronic under-funding, ministerial mismanagement and poor governmental guidance.

So, King asserts, a new Afghan strategy is essential - and the announcements from US General McChrystal and Gordon Brown at the end of August recognise this. However, their new strategy in Helmand also requires a reformation of Britain’s armed forces themselves.

The success of General Petraeus in Iraq rested finally on a common recognition by the US Army and Marine Corps that the way in which they trained, planned and conducted military operations required profound revision. In short, operational success demands institutional reform at home.

While valuable at the tactical level, the culture of "cracking on" needs to be expunged from operational command. The armed forces, the ministry of defence and government need to develop more mature criteria on which to assess the performance of commanders - judging them by their political contribution to the campaign, not by the number of air assault operations they have conducted.

There is some evidence that the British armed forces may be capable of this change, says King. In previous campaigns in Malaya and Northern Ireland, the British recognised, after false starts, that the key to success in counter-insurgency campaigns was the slow suppression of insurgency through intelligence, negotiation, the presence of adequate security forces and cross-governmental coordination.

The British now need to relearn these lessons very quickly. The alternative is that their commanders in Helmand will continue to disperse their forces in futile and blunt demonstrations - ensuring that they crack on to defeat not only in Helmand but at home, in the arena of public support, as well.

And that is the view of an academic, but one with a profound knowledge of the military. Rarely do I find myself reviewing a paper and ending up repeating it almost word for word. But with such a taut analysis, there is little "fat" and much to think about.

King's analysis, added to Grey's, and much more – including the recent observations in the British Army Review - all add up to the singular fact that the British Army is failing to perform.

While some less perspicacious observers prefer to direct their attention to the political management of recent campaigns, even the military seems to concede the need to rethink its operations, while the evidence mounts as to the scale of the failings.