Progress of a kind 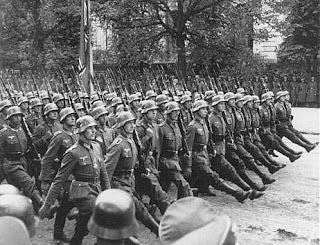 It is ironic that, on the 70th anniversary of the German invasion of Poland, we should be reviewing an article in Der Spiegel which catalogues a tale of woe concerning the dire state of the German military in Afghanistan. How the mighty have fallen, one might observe.

In a dreadfully familiar litany, we hear that "German Troops Bemoan 'Critical' Deficits in Training and Equipment", with "damning reports" emerging from the forces in Afghanistan, claiming that cooperation with civilian agencies is abysmal, equipment is lacking and training is insufficient.

All very familiar to is the apparent complacency of the German defence minister Franz Josef Jung. He is known for his anodyne expressions of confidence, repeated so often that, as Der Spiegel observes, they now have "little to do with reality": German soldiers are "well-trained and well-equipped" while collaboration with civilian agencies has been so successful that Germany's "networked approach" has even been "adopted in its entirety by NATO."

Back in the real world, troops serving in Afghanistan complain about the severe lack of vehicles, weapons and aircraft as well as about the paucity of supplies and replacement parts. They lament the "deficiencies" in military training and bemoan the fact that the much-praised collaboration between the military and civilian reconstruction agencies is actually functioning "pretty terribly".

Even some of Germany's pet projects in Afghanistan are failing. Whether it's civil reconstruction, developmental aid or training police officers, none of it is working. Collaboration with the BMZ, the German ministry responsible for development, is proceeding "not so successfully." The "implementation (of aid) … continues to be inflexible" and that BMZ projects "are still invisible to the local population."

Damningly, officers quoted in an internal report say that these failings tend to undermine "the credibility of Germany's involvement." They add that "starving people are much more impressed by food than they are by pamphlets."

Yet, while Jung is reticent about criticising fellow ministers and party colleagues, German officers are not shy about criticizing the numerous other players - including US soldiers, shady private security firms, the EU-launched police-training mission EUPOL, as well as German police officers and military police - for allegedly working alongside, rather than with, each other. "When it comes to this matter," says one officer, "we need some sort of coordinating element."

But if external agencies are creating problems, the Bundeswehr has plenty of its own. In particular, there is a "non-functioning logistical supply system" forcing troops to wait months for urgent supplies, creating a "permanent administration of scarcity."

Roughly 700 armoured vehicles in theatre are undeployable owing to "missing replacement parts and insufficient repair resources." Many "Dingo" and "Wolf" armoured vehicles are thus unused "sometimes for several weeks." Likewise, the vehicle fleet is judged "inadequate" on the whole, many lacking drivers trained for handling them off-road.

Top-mounted machine guns on Dingos can only fire "in the direction in which the vehicle is driving" - and only long as the soldier operating it is strapped into the seat, which he is obliged to do under the rules governing the peacekeeping operation in Afghanistan. As a result, it is impossible to engage enemies attacking from the flank or rear. Unsurprisingly, one Bundeswehr report states: "Weaponry that should, in principle, be useful is actually purely for show and can give the soldiers a false sense of security."

Then, there are not enough Fennek armoured reconnaissance vehicles and, after a number were lost to enemy action, the budget committee of the German federal parliament agreed to order new machines: 10 units, €39 million – but with a delivery date of 2011.

And the weapons the Germans have at their disposal are not particularly well-suited to their mission. If a soldier is wearing his flak jacket, he cannot aim his standard G36 automatic rifle. "Targeted shooting is either not at all possible or is restricted."

Aircraft are no better. Maintenance resources for the 40-year-old Transall cargo fleet are "in bad shape." With a lack of spares, many have to "cannibalized" to keep the rest flying, a process disguised in heavy officialise as "controlled disassembly", limited only by the lack of "qualified" mechanics. At least that is better than the "uncontrolled disassembly" which has stricken two of our Chinooks recently.

The Germans, though, have their own helicopter problems. Relying of the ageing CH-53 helicopters is described as "like rolling the dice" and – in common with UK forces, the military has been calling for more helicopters for as long as it has been deployed. But two more helicopters added to the fleet of six changed nothing, the reason, as one person commented rather dryly: "The staffing level was not adjusted to the number of aircraft."

Alarmingly, though, these are not just local difficulties but reflect systemic stresses in the military. Expenditure on foreign missions, pensions and personnel continue to rise, which, in the context budgetary constraints mean less for spares, repairs and training.

The results are described as "shocking". While flight crews should receive 180 hours annual training, German crews log 70 at most, far too few for combat readiness. Thus hardly any CH-53 pilots are certified to make "dust landings", to fly in high mountains, at night or in adverse weather conditions.

This "state of emergency" will soon affect Transall crews as well. Many of the pilots have retired and migrated to civilian airlines, perhaps because they were unable to take off in the Luftwaffe.

Luna UAVs – rather like the British Phoenix – cannot function in summer temperatures that usually reach 40°C and "attempts to cool down the aircraft using air-conditioning units before flights have not been successful." Tornado reconnaissance aircraft, on the other hand, deliver "excellent quality" photographs, but they take three days to process. "That is not at all sufficient for timely operational support," it is noted.

Furthermore, "operational awareness" is also regarded as a "key deficiency". Commanders complain they had no "comprehensive view of the situation… particularly when it came to the identities, locations and intentions of opposing forces operating in a concealed manner," - i.e., the Taleban.

This is not helped by a shortage of interpreters who can speak local dialects and secure telecommunications. Soldiers are forced to use insecure mobile phones while the computer network lacks the correct level of encryption so "secret" information from ISAF's HQ cannot be passed on to operational bases - even when lives are on the line.

In an attempt to overcome some of the deficiencies, it is now suggested that high-ranking guests should not be transported in camouflaged SUVs but instead moved in "civilian vehicles with analogue security systems," to allow them to remain inconspicuous. No one has explained how this stratagem can assist uniformed soldiers.

Needless to say, calls are now being made for "urgent improvements" in the protection available to soldiers, a need which is becoming increasingly urgent as Obama is set to demand more troops from Germany.

On reflection though, the scenario facing the Germans would not be unfamiliar to the troops of Army Group Centre, stalled outside Moscow during that dreadful winter of 1941-2. At least now, with 'elf 'n' safety dominating the new Bundeswehr, the troops in Afghanistan are well clothed, even if their weapons, vehicles and aircraft do not work. After nearly 70 years, that could be described as progress.