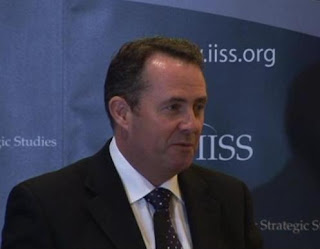 Those interested in the Afghan issue are doubtless aware of the recent McChrystal assessment report, and most will have either read the redacted copy or, at the very least, read one or more of the numerous media reviews of it.

Those who have done neither could, if they so wished, read the speech delivered today by Liam Fox to the International Institute for Strategic Studies in London.

With the working title, "Beyond the Smoke: Making Progress in Afghanistan", its substantive parts are unashamedly lifted from the McChrystal assessment report, comprising an evaluation of "three areas in the current struggle in Afghanistan". These are the role of the Afghan population in the war, capacity building of the Afghan Security Forces and the need to improve governance across Afghanistan.

Fox even admits the source, stating that they have been identified as priorities by the General, then somewhat rashly declaring that they form the basis of future strategy in Afghanistan.

Whether McChrystal was defining a strategy or simply a new (as applied to Afghanistan) tactical approach is moot, but the strategy comprises in essence the implementation of the "Integrated civil-military campaign plan", which goes well beyond the three areas enumerated by Fox.

Crucially though, Fox seems to have fallen into the trap (one of many) of assuming that the McChrystal assessment is a done deal. He is behind the curve, seemingly unaware that president Obama has not acted on it and, instead, has commissioned his own strategic review. Whether McChrystal's recommendations will become policy, therefore, remains a matter of speculation. They certainly cannot be taken as read.

The "game changer", of course, was the Afghan presidential election. It is recognised that any successful counterinsurgency requires a stable and legitimate political partner in the host country and, whether Karzai manages to cling on to power or not, there is general agreement that he will be weakened and that his administration will lack legitimacy.

On that basis, there are serious doubts as to whether the classic counterinsurgency strategy, advocated by McChrysal, can actually work. It was that which led Obama to commission his new review, from which an entirely different strategy might emerge.

Apparently completely oblivious to this development, Fox – in his only substantive reference to the election - states that it is "crucial" that it "must be seen to be credible and reflect the wishes of the Afghan people." This is wishful thinking beyond peradventure.

Thus, we are left with what amounts to a slavish adherence to the McChrystal creed, with not one scintilla of critical exploration. Fox's only concern is to ensure that the "strategy" is properly resourced. That much is picked up by The Times, which provocatively headlines: "Tories would send 2,500 more troops to Afghanistan, says Liam Fox".

The paper then reports that the shadow defence secretary had "indicated" that a Conservative government would increase British troop numbers in Afghanistan by up to 2,500 and deliver more helicopters, armoured vehicles and "other key battlefield enablers".

In what could have been an opportunity to set out a new direction for what is evidently a failing campaign, Fox has therefore sold the pass. Like so many before him, he pays lip-service to the received wisdom that the campaign cannot be resolved by a "military victory", but he then defines success as securing security – which of course he seeks to achieve by military means.

No one, it seems, can see the logical absurdity in this approach – least of all Fox. A military solution is not possible ... therefore we must seek a military solution. "The reconstruction will follow," says Fox. "The factors of prosperity, individual freedoms, and free markets ... may someday come to Afghanistan. We should do all we can to help this to happen but it will not happen overnight," he adds.

It does not dawn on him, the simple precept that the order might be reversed. Focus on economic reconstruction, build prosperity, and protect a people who then have a stake in their society and something to lose. Security will follow. In the final analysis, security comes not from the barrel of a gun – it comes from the will of the people. But then, that is probably too difficult for Fox to understand.