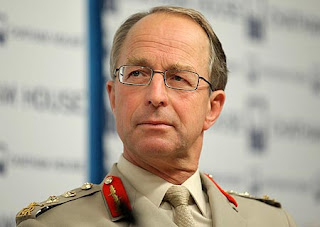 If our opposition politicians had been listening last night – which is doubtful – they might have learnt something from General Sir David Richards, the new Chief of the General Staff.

Prominent in his speech to Chatham House he made a declaration which would have shocked the purists, had they noticed, telling us that we must "rebalance our investment in Defence". Furthermore, he said, we must rebalance, "not from one service to another but from one type of conflict to another, for we simply can't afford to retain a full suite of capability for all eventualities."

All professional groups have their secret languages – their jargon, which serves to mark them out as different from the rest of the herd – with its own special vocabulary, where ordinary-sounding word have very special meanings, not immediately apparent to the outsider.

"Balance" is one of those words, as is "rebalance". For General Sir Richard Dannatt, the former CGS, "balance" was one of his favourite words, applied in the context of "balanced force".

Cracking the code, this means an Army which maintains a full range of capabilities, able to fight a full-blooded conventional war against a technologically advanced enemy, as well as the "lesser" tasks of peacekeeping and counterinsurgency.

Even in early August, when delivering his, valedictory speech, Dannat was pitching for his "balanced force", capable of fighting his "future wars" – battles of mass manoeuvre on some unspecified plains, involving huge mechanised armies, fielding tanks, guns and all the high-tech weaponry which comprises the inventories of modern forces.

But if that thinking held back the reshaping of the Army to deal with the insurgencies in Iraq and then Afghanistan, Richards is a breath of fresh air. He wants to "rebalance", based on the idea that the character of warfare is fundamentally changing.

Globalisation, he says, is increasing the likelihood of conflict with non-state and failed state actors, and reducing the likelihood of state-on-state (i.e., conventional) warfare. It will not disappear – but its character will change, becoming more asymmetrical, complex and mosaic.

Thus says Richards, our armed forces and other national security instruments across government must get better at tackling the challenges of this new security environment. This includes re-engineering non-military means to be relevant and effective security tools and, he adds, "Ensuring our armed forces are relevant to emerging security challenges and the increasingly sophisticated adversaries we will face."

Once you have cracked the code, this is heady stuff – amounting to nothing less than a revolution in thinking at the highest level of the cobweb-infested Army.

Successful armed forces adapt and transform at a pace faster than their potential adversaries, Richards observes. Cromwell, as an example, unlocked the synergy of discipline, training, new equipment and new tactics in a manner that left the Royalists looking like barely gifted amateurs. This process can be found throughout history although rarely is it accelerated with the vision and drive of a Cromwell.

Borrowing from his earlier speech, where he warned that the Army was facing another of those "horse and tank" moments, Richards noted that, "although not yet culturally internalised," there has been a radical change in the way wars are fought.

We cannot, he said, go back to operating as we might have done even 10 years ago when it was still tanks, fast jets and fleet escorts that dominated the doctrine of our three services. Instead, we have to face up to such "non-kinetic" requirements as "counter-IED, information dominance, counter-piracy, and cyber attack and defence".

Soldiers had to operate in a "complex combat, joint, interagency and multinational environment in which success is measured in terms of securing people's confidence instead of how many tanks, ships or aircraft are destroyed."

Then, straight out of the Gates book of procurement, Richards declares that the pace of technological change has left every nation's mainstream procurement process struggling to deliver equipment that will remain relevant against more agile opponents satisfied with cheap and ever-evolving 80 percent solutions.

Too often, he says, we still strive for hugely expensive 100 percent solutions – "exquisite solutions" as Secretary Gates calls them – relevant only in a traditional hi-tech state on state war but that risk being out of date before they are brought into service.

In sum, he adds, tactical, operational and strategic level success in today's environment is beyond that of a military that draws its inspiration from visions of traditional state on state war, however hi-tech in nature.

Much later in his speech, Richards returns to this theme, telling us that those who seek to continue investment in traditional forms of conflict at the expense of the new fail to understand the degree to which inter-state dynamics have changed since the Cold War era.

The asymmetric war, he says, is the war of the future and countries like the UK need only possess a deterrent scale of traditional warfighting capability - one that reflects our stated policy of only going to war as part of the NATO alliance or, in a regional context, with the USA.

He is not advocating the scrapping of all our aircraft and tanks to the point that traditional mass armoured operations, for example, become an attractive asymmetric option to a potential enemy. But ensuring tactical level dominance in regional intervention operations or enduring stabilisation operations and to deter is going to be achieved with allies, not by ourselves.

Accepting this logic will free up resources needed for investment in other more likely forms of conflict. It will also go a long way to finding the money needed to allow our armed forces to contribute to important stabilising activity in fragile and failed states as well as to that Cinderella activity of peace-keeping.

And that is what he means by "rebalancing" – spending less on the expensive "toys", accepting that we can no longer afford a capability for autonomous "high-end" warfare and tailoring our resources so that we can work alongside allies to common effect. If this "horse and tank moment" is not gripped, our armed forces will try, with inadequate resources, to be all things to all conflicts and perhaps fail to succeed properly in any.

Yet the only newspaper really to have got the point was The Guardian, which was the only one to report the speech properly. Even then, it missed the political dynamic – Richards, on the face of it – is at odds with the world view expressed by Liam Fox. We are in for some interesting times.