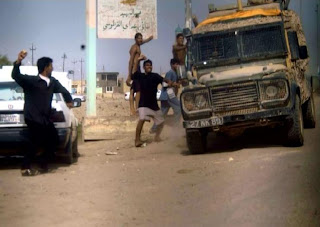 The Times ignores the obvious irony that, on this day of all days – the 70th anniversary of the declaration of war on Germany – it should come up with a headline: "The Army is making in the same old mistakes Afghanistan, say soldiers."

The irony is there in plenty as the first phase of the war against Germany was characterised by the Army making the "same old mistakes", starting with the disastrous campaign in Norway, the chaos which led to the retreat at Dunkirk, the shambolic Greek campaign, the unnecessary loss of Crete and the sequence of defeats in the Western desert, remedied only by el Alamein in 1942 when the 8th Army, fortified by huge stocks of US materiel, managed to prevail against a German force which had over-reached itself.

From a historical perspective, it is probably fair to say that we did not win the Second World War so much as Hitler lost it, not least by his determination to invade Russia, thus tying up 150 divisions which, had they been deployed in Northern France in 1944, would have thrown us back into the sea.

Almost – but not quite repeating history - in Iraq in 2003 – a victorious British Army, having so easily won the war – went on to lose the peace, not having learned, or retained the lessons of previous campaigns, culminating in our abject retreat from Basra and the expulsion of British forces earlier this year, the final act of which has yet to be played out. As before, only the timely intervention of the Americans saved us from a more humiliating rout, which has enabled us to pretend that our occupation actually achieved something.

But now, seeping into the public domain is the slow recognition by the Army that the occupation of Iraq was not "a glowing success, as some within Whitehall and PJHQ [the MoD’s Permanent Joint Headquarters] may try to claim."

That is the view of Daniel Marston, a former senior lecturer in war studies at the Royal Military Academy Sandhurst, articulated in the current edition of the British Army Review, a "Restricted" magazine that is not published openly but which Michael Evans of The Times has managed to obtain and report upon.

Thus does he convey the essence, that the Britain Army is failing to learn from the "military mistakes" made in Iraq in developing ways to defeat the Taleban in Afghanistan, according to a series of critical articles published in an internal army journal.

Dare we say it, but that is exactly the thesis we offer in Ministry of Defeat which, from the limited review that Evans offers us, goes far beyond that which the Army is yet ready to admit.

We do get from Marston, though, that "Observers expected that the British forces going into Afghanistan and Iraq, given their history of success in counter-insurgency, would automatically be better suited to waging wars among the people than their American counterparts."

But then he says that: "The British Army, in practice, appeared to be losing its way in terms of practical application of key facets of COIN [counter-insurgency] ... Many officers and NCOs ... were apparently unaware of important operational and strategic aspects of COIN. The British Army cannot turn its back on a difficult campaign and disregard lessons, some of which are admittedly very tough to swallow ... ".

We also learn from Evans that there is condemnation in the journal of Britain’s strategy in Iraq, particularly the decision to withdraw troops from Basra in September 2007, leaving the city to be taken over by extremist Shia militia. This, we are told, echoes criticisms made by senior American commanders at the time, which were rejected by the Government.

But, if that is as far as the criticism goes, then they are not there yet. As we never tire of saying, the strategic rot started with the decision to abandon al Amarah in 2006 (the picture is from 2005 in Alamarah), which set the pattern for the retreat which continued into Basra. Yet so few people – even amongst the troops who were in theatre at the time – knew what was going on that it is unsurprising that the full implications of that decision are not yet fully understood.

Even with the limited and highly controlled criticisms in the journal, however, Gen Dannatt admits in a foreword that the articles "make uncomfortable reading" but, we are told, "he welcomes the debate." Of course, the debate has barely started and, if it was that welcome, the brave General might have done more to promote it while he was still in office.

He does "reveal" though that a review of doctrine applied in Iraq and Afghanistan, called "Operation Entirety", has already helped "to focus the Army on the enduring campaign in Afghanistan". That review will be published soon, we learn.

Yet this is the review that has been six years in the making and, to judge from the lacklustre strategy being applied in Afghanistan, by no means all the lessons from Iraq have been either acknowledged or learned. But since it would appear that only now is the Army beginning to allow muted criticisms in a "Restricted" document, it has a long, long way to go before we get to the bottom of the failures in both Iraq and Afghanistan.

With historians still chewing over the entrails of the Second World War, it may be some time yet before we get to grips with the extent of those failures, leaving Trooper David Maddock in the current journal to put down a marker.

He declares: "British forces in Afghanistan today are fighting an asymmetric war, a war we have fought many times before in Arabia, Malaya, Northern Ireland and Iraq ... If we have such a vast amount of experience, why are we not implementing the lessons learnt by those who have fought and died before us?"

But the last word has to go to US Colonel Peter Mansoor, who says that, "Only through a thorough appreciation of the mistakes it made in Iraq can the British Army turn defeat into victory as it fights the untidy wars of the early 21st century. It should not ... gloss over its recent experience in Iraq ... Although the conditions [in Afghanistan] are different, the lessons of Iraq are still relevant."

"The British failure in Basra was not due to the conduct of British troops, which was exemplary. It was, rather, a failure by senior British civilian and military leaders to understand the political dynamics ... in Iraq, compounded by arrogance that led to an unwillingness to learn and adapt, along with increasing reluctance to risk blood and treasure to conduct effective counter-insurgency warfare ... ".

That arrogance is still there, in spades, and all we are seeing is the smallest of cracks in the edifice. But it is a start, even if it risks being too little, too late. We cannot afford 70 years before we finally admit that mistakes were made. And nor can we afford the luxury of dwelling on those events all those years ago, while ignoring the present.