"No plans for a European Rapid Reaction Force" 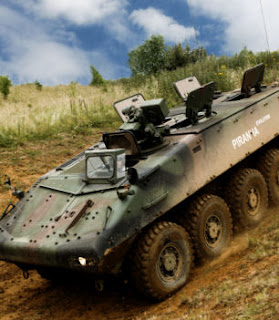 That is the latest statement from the MoD, which follows on from our story about the demise of the European Rapid Reaction Force, picked up by Christopher Booker in his column on Sunday, bringing the news to a wider audience.

The clue on which Booker relied was last week's conference on land warfare where Gen Dannatt slipped out in coded form that the Army's £16 billion Future Rapid Effects System (FRES), planned as the centrepiece of Britain's contribution to the European Army (aka the European Rapid Reaction Force), was a dead duck. Without that capacity, the UK is unable to make a meaningful contribution to the ERRF.

Booker's piece provoked an almost immediate response from the MoD, lodging its disagreement on its blog yesterday. In typical style, though, it is unable to resist a sneer, in declaring, "Christopher Booker's article displays a lack of understanding of some basic facts." And, according to the MoD, a crucial area where there is a "lack of understanding" is that "there are no plans for a European Rapid Reaction Force."

If Booker failed to understand this, however, he is not alone. In November 2000, when the definitive plans for the ERRF were announced, The Independent was rather full of it, The Guardian was likewise, adding a special report on the development, and the Tories were very unhappy - so it looks as if they all got it wrong

The deal had in fact been agreed at the European Council meeting held in Helsinki on 10-11 December 1999, with the details fully recorded by a House of Commons Library research paper, so it looks as if they got it wrong as well.

This denialist line, though, is typical of the word games the MoD has been playing for some years. In Jan 2001 for instance, then defence secretary Geoff Hoon was still admitting that it was planned, but stressing, "There is no standing EU Rapid Reaction Force."

Actually, that has been the case from the very beginning. The core of the force was always a planning cell and – eventually – an EU military HQ, with forces and equipment supplied for specific operations by member states. There was never any intention that the ERRF should be a standing force.

By May 2003, however, Hoon was embellishing his statements, adding to the then-established mantra that there was "no standing European rapid reaction force", by declaring, "nor any EU agreement to create one."

That, not to put too fine a point on it, is a tad disingenuous. Certainly, the origin of the ERRF emerged from an agreement between Tony Blair and Jacques Chirac at the summit in St Malo in December 1998 but, as Hoon himself stated in May 2003:

Existing national or multinational forces, declared under the Helsinki headline goal, will be made available to the EU on a voluntary, case-by-case basis when required for a crisis management operation. The United Kingdom has made a significant contribution, offering a wide range of capabilities and assets ...

That "Headline Goal", agreed at the Helsinki Council in 1999, was explained by the European Council. It amounted to an agreement by the year 2003 that member states would be able "to deploy rapidly and then sustain forces capable of the full range of Petersberg tasks as set out in the Amsterdam Treaty, including the most demanding, in operations up to corps level (up to 15 brigades or 50,000-60,000 persons)."

It was agreed that these forces should be militarily self-sustaining with the necessary command, control and intelligence capabilities, logistics, other combat support services and additionally, as appropriate, air and naval elements.

Furthermore, the member states should be able to deploy in full at this level within 60 days, and within this to provide smaller rapid response elements available and deployable at very high readiness. They had to be able to sustain such a deployment for at least one year, a commitment that would require an additional pool of deployable units (and supporting elements) at lower readiness to provide replacements for the initial forces.

Thus, the "Headline Goal" was, by any other name, the European Rapid Reaction Force.

Inevitably, there was no prospect whatsoever of meeting this ambitious target by 2003 and that proved to be the case. Thus, at the June 2004 European Council, a new "Headline Goal 2010" was formally adopted. Then, and now, the ERRF concept was not formally abandoned but the "colleagues" introduced the more realistic target of creating "battlegroups" of 1,500 effectives, deployable on 15 days notice, initially for 30 days with a capability to extend to 120 days.

Thereby it came to pass that, on 3 February this year, the Baroness Taylor was felt able to declare, "there is no European rapid reaction force". Strictly speaking, that was true. The EU's immediate capability is limited to fielding a maximum of two battlegroups, a capability that Taylor acknowledged.

On the following day though, then defence secretary John Hutton responded to a written parliamentary question from Liam Fox on the EU Rapid Reaction Force, asking "what the UK contribution is to the 50,000 to 60,000 person military force."

The answer, in accordance with the MoD line, was again that "there is no EU Rapid Reaction Force". But, giving the game away, Hutton added that the UK "continues to support the Helsinki Headline Goal that all EU member states agreed to in 1999, which calls for EU member states to be able to deploy within 60 days and sustain for at least one year military forces of up to 50,000 to 60,000 persons capable of the full range of Petersberg tasks."

In other words, the ERRF lives on as a concept, still supported by the UK. The MoD nevertheless continues to play its games, its credibility declining with every utterance it makes.

Nevertheless, the new reality – as enunciated by Dannatt last week – is that, four months after Hutton's declaration, the ERRF can exist on paper only as far as the UK is concerned. The loss of FRES makes it so.

As to FRES, the MoD denies it was ever planned to be the centrepiece of our EU contribution. That is as credible as the denials on the ERRF. Central to the whole concept of the force was that it would rely on an air-portable medium weight formation, a capacity that the British Army lacked and intended to fill with the procurement of the FRES medium weight family of armoured vehicles (example pictured – top).

That much was declared in the Defence White Paper of 2003, when the ERRF project was still live.

Then it was announced that, "To increase our flexibility in responding to crises (as in Petersberg Tasks), a new set of medium weight forces will be developed, offering a high level of deployability (including by air), together with much greater levels of mobility and protection than are currently available to light forces." This was to be "based on the Future Rapid Effects System family of vehicles."

Buried in the text also was the injunction that, "We must ensure that we continue to play a leading part in the development of NATO and EU (through ESDP) capabilities better configured to conduct expeditionary operations outside Europe." Our Armed Forces, we were told, "will continue to be prepared and equipped to lead and act as the framework nation for ESDP or similar ad hoc coalitions' operations where the US is not participating."

The two together tell the tale. In denying it, the MoD is fooling only itself. But the irony is that, while plans for the ERRF remain – contradicting the latest statement – Baroness Taylor and Hutton had it right in February. The ERRF does not exist.