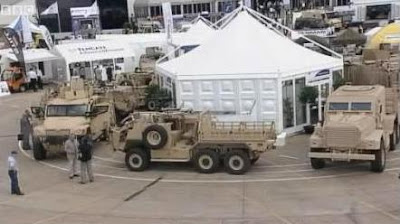 The MoD publicity machine has been hard at work over the last few days, selling "puffs" on the latest kit for "Our Boys" out in Afghanistan.

Leader of the pack of respondents – with actually very few takers so far in the MSM – is the BBC, which has a gloriously uncritical report from Robert Hall extolling the virtues of the latest tactical support vehicles procured, including the Husky, Wolfhound and Coyote.

These were unveiled today at the DVD fest at Millbrook Proving Ground in Bedfordshire, the Defence Equipment & Support's (DE&S) "key stakeholder event" where Hall obligingly told his audience that the MoD had learned a great deal from its experience in Afghanistan, then happily being driven away in a Husky.

Equally obligingly, Hall gives defence equipment minister Quentin Davies plenty of air time to tell us how this new stable of vehicles would provide troops with high-quality and versatile equipment to give a "battle-winning edge in Afghanistan".

"We are working tirelessly to ensure they have the right equipment for the right job and ensuring that we respond quickly and innovatively to equipment requests from the frontline," Davies adds.

Hall's online piece also features a new lightweight textile-based armour to protect vehicles from rocket-propelled grenades. This is called the Tarian system, developed by Dorset-based company Amsafe, and is intended as a partial replacement for bar armour.

This is given a good airing by Deborah Haynes in The Times, telling us that the main benefit of the product is that it is 85 percent lighter than steel blast protection and 50 per cent lighter than aluminium bar armour. Thus we learn that troops can take advantage of the weight saved to fit other protective measures to their vehicles, "making them more survivable in Afghanistan, where the greatest risk to lives is posed by roadside bombs."

The idea of saving weight to add weight elsewhere is recognisably MoD propaganda, reflecting exactly that unchanging mindset which equates protection with weight of armour rather than design.

But what is interesting – to put it in as neutral a way as possible – is how willing the media seems to regurgitate the official line, without in any way questioning what they are told. This is especially the case with the BBC who in Robert Hall had the ideal propagandist, worth his weight in gold.