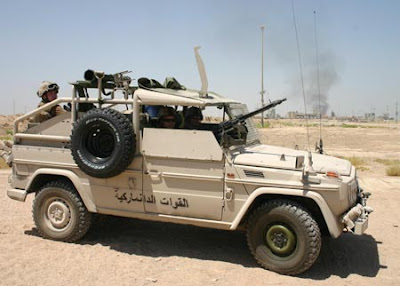 Covered only briefly by the British media was an incident on Wednesday when three Danish soldiers were killed by an IED in Afghanistan.

As the 700-strong Danish contingent in the country is under British command, and operates closely with British forces, these could so easily have been British soldiers, in which case there would have been a great deal more attention given to this small tragedy.

Here, what is remarkable is that there are uncanny parallels between this incident and one which occurred on 25 February of this year. Then, three soldiers from the 1st Btn The Rifles were also killed by an IED. They were riding a Wimik near Gereshk, engaged on "routine escort duties" along the notorious Highway 1 when they were hit by a culvert bomb estimated at 250Kg.

As to the current incident, the Danish troops were reported to have been riding in a "lightly armoured jeep" – most probably a Mercedes G270 CDI (pictured) – which is a direct equivalent of a Wimik. They too were engaged on routine escort duties near Gereshk along the same Highway 1, and were also hit by a culvert bomb, this time estimated at 350Kg.

Highway 1 is the main artery in Afghanistan. It runs from the eastern Pakistani border through Kabul and Kandahar, onwards to Herat in the west, passing Camp Bastion, the main coalition base in Helmand province, and thence on to the Iranian border.

Unsurprisingly, given its strategic importance, it is a key target. And, as one of the few paved roads in the country, is difficult to mine. Therefore, the Taleban – as did the Iraqi militias and the IRA before them - have resorted to the tactic of using culvert bombs, taking advantage of culverts which number into the thousands in some provinces, spread out over hundreds of miles of road.

And, according to Time magazine, not only has the frequency of such attacks increased, the power of the bombs employed has gone "way up." Twenty-pound charges have been replaced by oil drums packed with hundreds of pounds of explosives, set off by trip wires and pressure plates, that are capable of destroying up-armored humvees.

In Northern Ireland – where the IRA used on occasions 1000lb bombs - to deal with such formidable weapons, the British Army were forced to abandon the roads altogether, resorting to helicopters and foot patrols, a decision which was taken shortly after a Saracen APC (pictured) was destroyed by a culvert bomb near Crossmaglen on 9 October 1975. 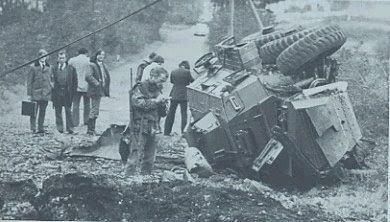 Unfortunately, the option of relying entirely on helicopters is not available to the coalition forces, and not entirely because there are insufficient helicopters. The roads – and in particular Highway 1 – are needed to move large quantities of supplies and are used heavily by Afghan security forces and civilians. To abandon those roads to an enemy which is indiscriminately slaughtering civilians as well as the security forces is also to abandon any attempt at winning "hearts and minds".

On the other hand, foot patrols and direct intervention is proving extremely hazardous. At the beginning of this week, a Canadian combat engineer died while trying to defuse an IED in a culvert beneath a roadway about 12 miles southwest of Kandahar City. Also killed in the blast was an Afghan policeman. An interpreter was injured and evacuated by helicopter.

Once again therefore, technology is having to provide the answers, one application of which is the mine protected vehicle. Despite the increased size of bombs, many still believe they are saving lives although no one pretends they are the complete answer.

Danish defence Chief of Staff Tim Sloth Jørgensen believes that more losses from IEDs are "unavoidable". "We're never going to find them all," he says. "There is no safe way to do so, and the enemy is always coming up with new tactics."

Others, offering arguments redolent of those we heard during the Snatch debate, defend the decision to transport troops in lightly armoured vehicles. Despite the incident in February, they cite the relatively safe conditions along Highway 1. They also point out that if soldiers began travelling in armoured personnel carriers, the Taleban would begin planting larger bombs.

This argument for "safety" is not shared by Time magazine, recording that the section of Highway 1 between Kabul and Kandahar is littered with "brutal evidence" of the Taliban's IED offensive.

The road is a showcase US-funded project, meant to connect two of the country's most vital commercial centres, but it is now an automotive graveyard, littered with burned-out carcasses of vehicles and disrupted by crumbled bridges.

One infamous stretch is lined with the wreckage of 40 transport trucks, the remains of a 90-minute enemy ambush dubbed the "jingle-truck massacre." (Afghans hang chains and coins from their truck bumpers, which create a jingling sound.) "Every few miles, craters of varying size pock the pavement, interspersed with suspicious patches of dirt that compel patrol convoys to make off-road detours or dismount to investigate before proceeding."

The problem, however, is not new. Similar conditions were experienced in Iraq and there US forces developed engineering solutions to reduce the risks. This included a programme of clearing road verges, compacting the road shoulders, replacing manhole covers to drainage systems and fixing grates on the ends of culverts.

Route clearance was also practised in Iraq, using equipment such as the Buffalo - although these will not be delivered to the British zone until next year at the earliest. 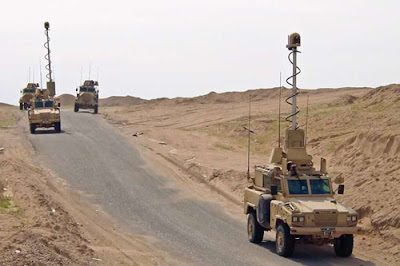 Other equipment which has been used are mast and aerostat-mounted surveillance cameras, which allow for the continuous observation of vulnerable sections of road which cannot be achieved with UAVs. This principle has been extended with the use of mast-mounted observation cameras and other sensors on vehicles (pictured above).

As much as anything, this is an engineers' war - a game of three-dimensional chess where technical expertise and innovation is as important as firepower. When it comes to "boots on the ground", therefore, more infantry are not necessarily the answer. We need more combat engineers.