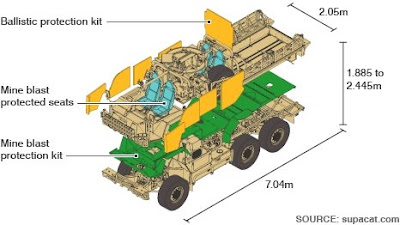 British troops in Afghanistan will get 200 new combat vehicles this year, The Daily Mirror informs us.

Although other sources report the cost as £350 million, The Mirror writes of a "£74 million upgrade" which is says willl bring faster, tougher, versions of cars already in use there - dubbed "dogs of war" by troops - which can withstand 50-degree heat and some explosions.

They will include, we are then informed, 110 Jackal Mark II patrol vehicles and 70 Coyotes for tactical support. A "senior military source" (i.e., press release) is then recruited to tell us that: "The Jackal has become very popular amongst reconnaissance troops. It is a long range vehicle, heavily armed with high-calibre machine guns, and is extremely versatile in difficult conditions."

Then, for the pièce de résistance, the paper grandly proclaims: "The Jackal II is Land Rover based and open-topped - vital for reconnaissance work and engaging with civilians," with the added information that, "The vehicles are to replace dozens that have been battered or blown up ... ".

The Coyote graphic (above) comes from the BBC site, illustrating how the vehicle is "designed" to protect UK troops.

This is what passes for reporting these days. We are so lucky that the media is on the ball.