And then there were ten 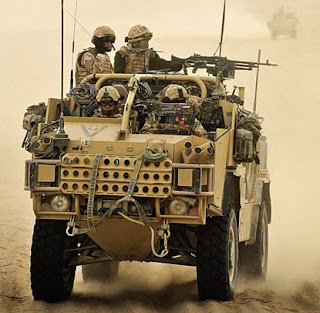 So embedded is the nine-to-five culture at the MoD, it seems, that the website has yet to be updated with details of the latest British casualty in Afghanistan, a Welsh guardsman who, according to diverse news agencies, was killed on Friday morning while on a routine patrol near Lashkar Gah.

Details from the agencies, based on an MoD press release, are sparse. We learn little from them other then he was yet another soldier killed by an IED, bringing the overall death toll of British service personnel in Afghanistan to 169.

Mick Smith of The Sunday Times is on the case though, reporting that this is the tenth soldier to be killed in a Jackal, with the families of troops killed in this "controversial" vehicle set to challenge the MoD over its use.

The lightly armoured Jackal, writes Smith, was designed for open terrain but is increasingly being used on Afghanistan's roads, where it is highly vulnerable to bomb blasts. The Taliban has turned to the roadside bomb as its main weapon against Nato forces, with three quarters of the 32 British troops killed this year dying in explosions, the Jackal being a prime target.

That the vehicle was being targeted was highlighted by Thomas Harding in The Daily Telegraph on 1 June, when he reported that perhaps a quarter of the 100-strong fleet so far delivered to Afghanistan had been wrecked or badly damaged by Taleban attacks.

Smith tells us that the first of a series of inquests into the deaths of soldiers in Jackals in Afghanistan opens next month. Coroners and lawyers for the families expected to question the vehicle's use. Dianne, whose 25-year-old son, Rifleman Adrian Sheldon, was killed last month when his Jackal was blown up at Sangin in northern Helmand, says the family is hiring a lawyer.

Sheldon is saying that she wants to make sure the right people are there helping to ask the right questions to make sure "we get the right answers." She had heard about the issues surrounding the vehicle and asks: "Could its failings have contributed to my son's death?”

Ten is now the same number of soldiers who have been killed in Snatches in Afghanistan and, with families now suing the MoD over the Snatches, Tony McKibben, whose Royal Marine son Robert was one of two men who died when their Jackal was destroyed by an IED near Garmsir in November, said he did not want anyone else to lose a son the same way. He says, "If it doesn't do its job properly it needs to be looked at. If nobody stands up, nothing is done. I've lost my son but this could stop someone else losing theirs."

According to Smith, commanders say the Jackal is well suited to its original role of driving across rough terrain in a reconnaissance or attack role, but is not suitable for Afghanistan's roads. However, a lack of helicopters and the vulnerability of the two other light vehicles, the Snatch Land Rover and the lightly protected Vector troop carrier, forces the use of Jackals on the road.

This is exactly what we feared would happen when the vehicle was first introduced. Originally procured for the special forces, the lack of protection was justified for its specific role, where troops can rely on surprise and speed, but where they are being tied down to routine operations the dynamic changes.

Thus says Richard North, author of Ministry of Defeat, a new book on the MoD's failures, "The Jackal is fundamentally flawed ... The driver and commander are positioned over the front wheels, making them vulnerable to mines."

Needless to say, the MoD misses the point. "The Jackal's great strength is that it can go anywhere – across the most difficult terrain. It is a superb vehicle but could not do what it does were it laden down." The inference is that the vehicle should carry more armour. But, at seven tons, a vehicle of that weight – equivalent to the RG-31 – could be adequately protected if it had been designed properly.

Such is the mindset of the MoD, however, that protection equals weight rather than good design. Its idea of conferring protection is to bolt on armour – of which there are now over two tons on the Jackal – rather than get the design right in the first place.

Now troops are paying the price – as we predicted all along, first warning of this almost exactly two years ago. Perhaps now we will see yet another MoD procurement disaster exposed. But, so committed is the Army to this deathtrap that it will be some time before the Jackal goes the same way as the Vector and is taken out of service.

With ten dead already, though, it must surely only be a matter of time.