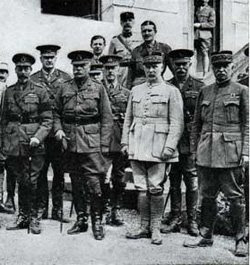 Tucked away at the very end of a piece in The Guardian is a short comment. It notes that the much-touted plans for an extra 2,000 British troops to be deployed to Helmand had been rejected by Gordon Brown, "partly because of Treasury concern about the cost, and partly, say Whitehall officials, because the plans were not convincing."

This is amplified slightly in Defence Management which tells us that it has "emerged" that Prime Minister Gordon Brown rejected plans for a permanent surge of 2,000 troops earlier this year because the proposal was "not convincing" enough. Downing Street, we are told, wanted to see a co-oordinated effort between combat and reconstruction efforts.

Had either or both read Defence of the Realm on 30 April, they would have read something very much to similar effect, where we were the only source stating unequivocally that there would be no permanent uplift in troop numbers in Afghanistan, the precise reason being that the military could not come up with a coherent plan for their employment.

We further amplified these issues later in the month and again in early June, but only now is the mainstream picking up the vibes, which were there more than a month ago but missed by the likes of Michael Smith of The Times, who chose to interpret events though the one-dimensional perspective of "Army versus Treasury.

This focus on cost limits imposed on the "gallant" Army – which, as legend would have it, could win the battle only if it was given enough "boots on the ground" – cropped up again recently, with the accusations from Ed Butler that there had been "tough financial constraints imposed on British troops" in the early days of the Afghani campaign, with the claim that Gordon Brown as Chancellor had demanded that only £1.3 billion could be spent on the operation in three years.

As it happens, actual spending from the Treasury reserve on Afghanistan – in addition to allocations from the Defence budget - was £0.75bn in 2006-07, £1.5bn in 2007-08 and £2.6bn in 2008-09. The forecast for 2009/10 is over 3bn. That puts additional expenditure in three years at close to £4.5 billion which suggests that either Gordon Brown was not as all-powerful as is often suggested, or that the "cap" is a figment of a number of over-heated imaginations.

While the legend, however, plays well to the crowd and can always be guaranteed to provoke foaming at the mouth from the claque and ritual denouncements from opposition politicians, it obscures (and quite deliberately on the part of some) the greater problem in theatre, at the heart of the reluctance to commit huge and growing sums of money in what amounts to giving the MoD a blank cheque.

Something of that was spelt out on the forum, noting that the military had long failed to make a coherent case the cash it has been demanding, and is still unable to do so.

In practical terms, this has been reflected in operations on the ground where, to an extent, the commanding officers of each roulement have had their own ideas about tactics and strategic priorities and have, perhaps been allowed more latitude that perhaps they should. One would not expect key strategic decisions to be made at this level, all of which we surmised, suggests a vacuum of leadership higher up the command chain.

If that is put together with recent events, one can only conclude that we are in a remarkable situation where the military high command has lost the confidence of the government it serves. There is also a feeling that this loss of confidence is reciprocated, and unlikely to be improved by the appointment of Bob Ainsworth to the post of Secretary of State for Defence.

Should this be the case – and the vibes are certainly there – this is an extremely worrying development, and one which perhaps merits more attention than it is getting. Even in this "dumbed-down" age, where soap opera politics prevail, a leadership crisis at the top of the military is of some importance.