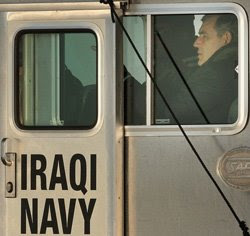 Despite the military and political attempts to keep secret the fact that British forces have been kicked out of Iraq, today has seen yet another humiliation delivered by an Iraqi government determined to eradicate every trace of British presence from their country.

This is according to The Times which, with others, reports that that Britain's final military mission in Iraq is in disarray. The mission in question is a Royal Navy detachment which was supposed to be training and mentoring the Iraqi Navy, with upwards of 400 service personnel remaining after the 31 July deadline when the bulk of British forces are required to quit Iraq.

But, as Deborah Haynes, defence correspondent, tells us, there has been a failure to seal the agreement with the Baghdad government, which was supposed to have been concluded by the end of last month. This has forced two British ships to leave and scores of Royal Navy trainers have had to suspend work.

The only progress made to date is a "draft accord" which has been approved by Iraqi ministers, but this must still go before parliament, and Iraqi MPs have a reputation for dragging their heels on legislation. Even then, far from authorising the full contingent, the draft only permits less than 100 British personnel to remain, and then only for year after the Iraqi parliament gives its approval. Furthermore, there is no military immunity and all personnel remaining will be subject to all Iraqi laws.

To add to the humiliation, a separate detachment of 200 British troops in Baghdad will be required to leave, along with Lt-Gen Chris Brown, deputy commander of coalition forces since March. He had hoped to stay in Iraq for a year but will now be returning home at the end of July, along with all the other British officers in Baghdad. He and the other British officers will be replaced by US officers.

This outcome is very different from that expected by the British government, which has been putting a great deal of effort into securing the face-saving concession of keeping the Royal Navy and Baghdad detachments in place.

Detailed negotiations began in September 2008. Brown set out his expectations in December backed up by heavyweight lobbying by First Sea Lord, Admiral Sir Jonathon Band, who visited the Iraqi Naval Base at Umm Qasr in the same month.

In January, Gordon Brown, accompanied by the Chief of the Defence Staff, Air Chief Marshal Sir Jock Stirrup, made an unannounced visit "to see first-hand the Iraqi Navy's progress".

By mid April 2009, the MoD seemed to think that an agreement was secure, reporting that the Iraqi Government had asked for the Royal Navy-led training team to stay in the country. However, at the end of April, when British land forces formally ceased operations, discussions were still "underway" on the precise scope of future British military activity. At that stage, though, it was anticipated that "up to 400 UK military personnel" would remain. It was not to be.

Nevertheless, Liam Fox, Tory shadow defence secretary, seems to have misunderstood what is going on. "It is hard to believe," he days, "that this situation could not have been sorted out through diplomatic channels in time and avoided. But there must be a suspicion that the government is so consumed with their internal problems that they have overlooked this."

Nothing could be further from the truth than his last "suspicion". Behind the scenes, British officials have been working flat out to reach a successful resolution, deemed essential for Britain to retain even the last vestiges of "face”. But Maliki, still deeply resentful at the way the British walked away from confronting the militias in southern Iraq, was having none of it.

When the mandate of the British forces was not renewed last December, we described it as the "last humiliation". In that, we were wrong. Maliki had another up his sleeve. He has just delivered it.