Failure is not an option 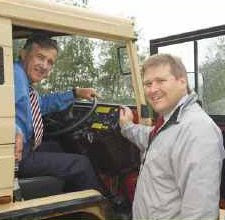 In June 2006, Gerald Howarth, shadow defence procurement minister, posted on his own website: "We welcome the Government's announcement that the Vector vehicle will enter service next year." He did, however, add: "It is more manoeuvrable but, according to the Secretary of State, is not much more armoured than the Snatch Land Rovers."

Not quite a year later, we reported that the same Gerald Howarth was praising the Pinzguaer Vector, even to the extent of appearing on the company's website (now defunct), giving it his endorsement.

However, to be scrupulously fair – something for which we are not famous – Gerald did later complain that the vehicle was not suitable for Afghanistan, and he did draw attention to then procurement minister Lord Drayson that the driver was exposed by sitting over the front wheel.

Now fast forward to yesterday and we see Gerald in Defence Questions asking: "Does the Minister agree with the former Secretary of State, who described the Pinzgauer Vector as 'an excellent solution to our soldiers' requirements', or does he now accept that, at a cost of more than £100 million, it was a massive defence acquisition fiasco".

And, to give credit where it is due, Gerald also recognised the role of Ann Winterton in drawing attention to the defects in this vehicle, then asking what had been done "to improve the technical evaluation process to restore our troops’ confidence in the acquisition process".

This is real politics, the opposition challenging the executive on a very specific issue, bringing attention to a serious defect which needs addressing and without remedy will cost lives. We would have preferred earlier intervention but at least the system is now working.

As for the government response, this came from Quentin Davies. It can be said that he did not acquit himself with honour – this being his reply:

The hon. Gentleman should wake up a bit, get with it and start to look at the realities of life. The fact of the matter is that those who invest in a portfolio of armoured vehicles, as we are doing - or, indeed, in a range of equipment for any purpose in this world - will want to ensure that they have the best, in terms of meeting different requirements in terms of mobility, capability, fire power, protection and so forth. We will inevitably have some vehicles that are less effective than others; we will inevitably have some successes and some failures; that is what a portfolio policy is all about, by the way. Vector was not a success and it is being withdrawn. Its problem has been its "operationability": it has great difficulty carrying some of the loads that it is required to carry on the Afghan terrain. It has not been able to live up to expectations there, and we will be replacing it with the new tactical support vehicles that we have ordered - the Coyote, the Husky and the Wolfhound -which I have mentioned in the House in different contexts. That is one more example of this steady process of flexibility, improvement and enhancement, which is the policy to which we are committed.

It would take far too much space in this post to deconstruct, word for word, Davies's statement but there are three points which can be dealt with. Firstly, the MoD is in denial about the Vector, refusing to admit that the vehicle failed primarily because of its lack of protection. Its load-carrying problems came with the stupidity of adding a great weight of armour in an unsuccessful attempt to improve that protection.

The second point is that Gerald is quite right in drawing attention to the "technical evaluation process". There is clearly something drastically wrong with the process, as a result of which the MoD is consistently – at ever-increasing expense – making the wrong choices on vehicles.

Contrary to perceived wisdom, mine protection and off road-performance are not mutually incompatible. The mistake has been - as with the Vector - to take an existing, non-protected vehicle and then to try to add protection by means of "bolt-on" armour. This can never succeed and degrades the original vehicle with the addition of weight.

The MoD is thus working to the wrong paradigm - to optimise protection without prejudicing performance, the protection must be designed in, not added on.

From that stems the third point. The same false paradigm is being applied to the successor vehicles, not least the Coyote and the Husky. That these are actually Vector replacements come as no surprise. Particularly with the Husky, with a ton and a half load space, this was never a credible support vehicle. It is, in effect, the new Snatch.

As to the effect of this flawed approach, the figures are stark. Approximate figures for deaths in unsound vehicles are: ten in Snatches, fifteen in Wimiks, at least six in Vikings, nine in Jackals and five in Vectors. At 45 deaths, these account for one in four of the total of 165 troop deaths in Afghanistan, almost all of them preventable.

Thomas Harding in The Daily Telegraph points out the hazards of the Jackal, estimating that, in addition to the deaths, at least of quarter of the 100 Jackal fleet in Afghanistan has been severely damaged or destroyed by enemy action. By contrast, in an earlier post, we showed a picture of a Mastiff which had taken a serious explosive strike. Yet, despite the damage, it was easily repairable – not so the Jackals, each costing close on to £400,000. We are thus dealing with a serious equipment issue, as well as the death and injury rate.

Clearly, neither the MoD nor its ministers are up to the job of sorting these problems out. The long-stop is Parliament, and it is beginning to stir. This is the only hope of keeping people alive. We need this system to work – failure cannot be allowed to be an option.