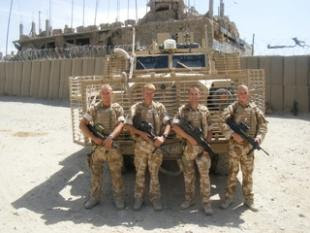 Given the professed concern for "Our Boys" and the outpourings of regrets when soldiers are killed, it is rather remarkable that so little attention is being given to their equipment, particularly the growing list of vehicles failures which have accounted for more than 40 deaths in Afghanistan.

Even then, it is quite remarkable that the only journal to notice the comments on the Vector last Monday by Quentin Davies at Defence Questions was Defence Management.

It noted Davies saying that, "When purchasing a number of armoured vehicles, failure was bound to occur in some areas," this (rightly) being interpreted as the defence minister attempting to justify the withdrawal of the Vector.

The journal then goes on to state: "Despite lessons learned from the Iraq insurgency, when the MoD bought a new fleet of 100 Vectors in 2006, it failed to ensure that they had v-shaped hulls or armour strong enough to withstand IEDs and landmines. At least five personnel have died in the vehicles since 2007". Despite spending £100m on the Vector, Davies did not appear willing to admit that the process was a failure, it added.

That failure has cost £100 million, the deaths of at least five soldiers and the serious injury of many more, and one would have thought that the very obvious refusal of Quentin Davies to admit error on the part of his ministry might warrant a mention in the MSM, not least because it indicates that the MoD has yet to learn any lessons from its failures.

At least on another egregious failure – the Jackal - The Daily Telegraph did publish a story on it. With only five pages for general news, however, while the paper concentrates on MPs' expenses, only a tiny amount of space was allocated to the story in the print edition. No other newspaper or media outlet seems to have touched the issue.

With two soldiers being killed in the Jackal, in the Musa Qala area, the story would have been even more powerful had a piece published yesterday in the Oxford Mail been available. This also dealt with a bomb attack on a vehicle in the Musa Qala area – this one on 17 May - but the headline tells of a different outcome. It reports: "Bicester troops survive Afghan bomb explosion."

Four soldiers were involved in this incident, from 23 Pioneer Regiment of the Royal Logistic Corps (pictured), but they were in a Mastiff and were unscathed after a Taleban bomb exploded under their vehicle.

Vehicle commander Capt Gordon Fletcher is cited as saying: "After the initial shock of the explosion and the dust cloud in the vehicle had subsided, our first reaction was one of disorientation, trying to take in the severity of the event that had just happened, followed by what felt like minutes, but most probably seconds, of almost silence."

Fletcher then tells us: "Due to the size of the explosion we were unsure of the extent of the damage to the vehicle. On further examination, the vehicle was able to drive on its own out of the contact area."

The contrast between the fate of the crew in the Jackal, compared with this happy affair, tells its own story, but Fletcher goes on to say that "The Mastiff armoured vehicle affords us great mobility across the desert terrain of Afghanistan, despite its size and weight, giving us unrivalled protection." He adds, "In our opinion the Mastiff saved our lives and is an excellent asset."

The rationale for the Jackal, of course, is its superb off-road mobility and, although the Mastiff has actually performed better than expected, it cannot compete with the Jackal in that department. 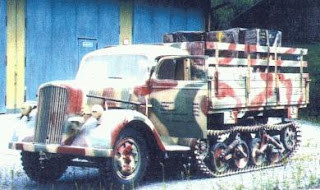 However, even here one is struck by the inertia and lack of imagination of the MoD, which relies on its "mobility" and "agility" mantras to justify fielding a machine which has now accounted for nine deaths and many more injuries.

Yet, when it comes to off-road performance, there is one option which could dramatically improve the Mastiff's capability. That same option was adopted by the Wehrmacht on the eastern front, after the 1941 campaign when its supply trucks bogged down in the mud of the Russian steppes.

Taking the standard three-tonner, the Opel Blitz, the vehicles were adapted to take the Panzerkampfwagen I track assemblies, turning them into highly capable half-tracks known as the Maultier. The modifications were not complicated and could be undertaken by field workshops. And, when the trucks returned to better terrain, some were converted back to fully-wheeled standard.

Nor has technology stood still in this area. Recently, a Dutch company has pioneered half-track conversion kits which can be fitted to a range of commercial trucks – most notably the Iveco Hovertrack (pictured below). 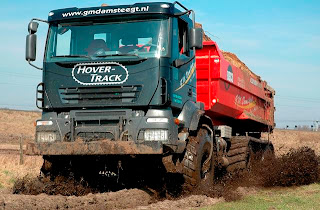 The rig, which doubtless could be fitted to a Mastiff, confers stunning off-road performance and could considerably expand the performance envelope of this vehicle.

Furthermore, when it comes to the smaller 4x4 version, the Ridgeback, again the Opel Blitz provides a model. Some of these were converted to fully-tracked vehicles. Applying the same thinking, modified Ridgebacks could perhaps take the place of the failed Viking, which has also proved to be a killer of men.

That this is a Second World War solution reminds us that, during that period of hostilities, we saw a great deal of technical innovation, driven by the need to provide solutions to pressing problems. The half-track was one of those solutions, and it was also adopted by US forces as a way of providing enhanced off-road mobility.

Thus the White Scout Car was adapted to become the ubiquitous M3 Half Track, which was still in operational use thirty years after WWII ended. Some 41,000 were built.

Currently, the lack of innovation and the rigid thinking also tells a story, reflecting an Army and the MoD which still has not come to terms with being at war. That, more than anything, is what is handicapping our armed forces, constituting a major hidden scandal. The Army, it would seem, would rather stick to its mantras than provide solutions to problems, inviting the suspicion that it is not up to the job.