A sense of proportion 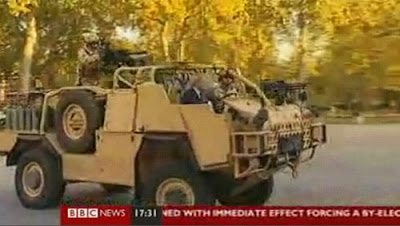 "I find it so distressing to hear lavish praise being heaped upon the procurement of vehicles that are potential death-traps and to listen later to expressions of condolence to the families of those who have perished in them."

Thus said Ann Winterton on Thursday (pictured below right), to a near-deserted Commons debating chamber, addressing on the government benches the minister of state for defence, Bob Ainsworth (below left).

Spoken from the heart, with more than a hint of anger, that went entirely unrecorded by the MSM which 24 hours later was to be engulfed in a "day of drama", precipitated by the sudden resignation of James Purnell. Little did we know that, by the end of that day, John Hutton would have resigned and been replaced by Ainsworth as the new secretary of state for defence. 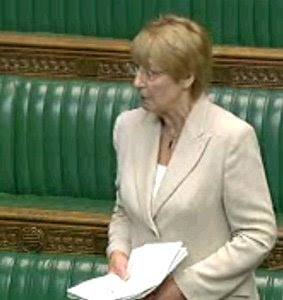 Why Hutton should have resigned so suddenly is not known. He claims "family reasons" but nothing is that simple in politics and, with only eight months in office, he had barely begun to make his mark. For him to leave at what is a crucial moment in the Afghani campaign, however, can hardly help matters. Unsurprisingly, it has been described by Field Marshal Lord Bramall, former CDS, as a " dereliction of duty ".

Back on the Thursday, Ann could hardly have guessed that she was addressing that man soon-to-be-king, when she complained to Ainsworth about the all-important "protected vehicle fleet" in Afghanistan, using General Dannatt's word to describe it as "unbalanced".

There were, she said far too many other vehicles in service (or about to arrive) without the basic mine protection afforded by the "v-shaped hull", those including the Coyote, Viking, Tellar and Warthog - and the Jackal (pictured above, being driven by John Hutton).

It augers ill that Ainsworth, now in the dominant position, did not get the point. The hon Lady, he said, "must accept that we cannot put all our people into the same kind of vehicles. We have to give them a range of different vehicles of different sizes."

There is no way that Ann was arguing thus. Simply that all military vehicles in a part of the world where mine strikes and IED blasts are tragically common should be suitably protected. It is not part of the case that the choice should be restricted to that which are – the point being that better vehicles are required to supplement the range.

Ainsworth, though, ploughed on regardless, heedless of this point, picking up the points Ann had made about the Jackal which, she averred, "highlighted the failed concept of bolting on armour, as proved by the American Humvee vehicle."

Repeating the tired and discredited mantra which he had been fed by his advisors, Ainsworth launched into its defence, declaring: "We have to try to mitigate the effect of using a smaller vehicle and that can be done only to a degree. The main protection of the Jackal is its massive manoeuvrability; it does not have to go down the well-trodden path. If the hon. Lady goes to theatre, she will know that it is a very well thought of vehicle among all ranks." 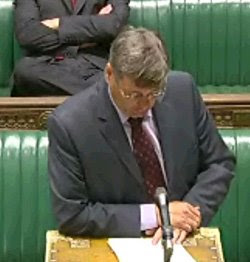 This invited the obvious retort from Ann: "I would not like to hazard a guess as to how many young men have been killed in it unnecessarily," she told Ainsworth. But the now defence secretary would not leave it there. "The hon. Lady is suggesting that there is some easy alternative that would give our people the capability that they need to do the job and yet remove if not the entire risk, a lot of the risk associated with the Jackal. I do not believe that she is correct."

Ann showed her anger once more. "I hope that the right hon. Gentleman does not think I was born yesterday," she responded. "War is bloody and people get killed in it, but what is desperate is the fact that this country has not supported its soldiers in conflict with the right kind of vehicles, which can be obtained, and has instead made major mistakes in procurement."

While we would not attempt to argue that the recent events have not been important, the "drama" embraced so enthusiastically compares poorly with the real-life struggle that lies out of sight and out of mind, ignored by an indifferent media and uncaring politicians – the real world where men and women are dying needlessly because of mistakes made in London by people who should know better – mistakes to which Ann was seeking to draw attention.

The stark peril facing those men and women is underlined by an article in The Daily Telegraph today, but as no more than a curiosity, detached from the political process.

Written by the paper's stringer, Ben Farmer, he records that troops in Afghanistan "are facing a major increase in the number of roadside bomb attacks as a surge of reinforcements has forced insurgents to shun direct attacks".

This is based on a Nato report that the incidence of IEDs has jumped 80 percent and last year killed 172 international troops. Hundreds more Afghan police, soldiers and civilians have been killed and maimed. Then cited is Gen Richard Blanchette, spokesman for the Nato-led forces, who says: "This is very serious business for us."

He adds that the increase was prompted by insurgents changing tactics and an influx of international troops patrolling on the ground, telling us that, "They are using this as a last measure".

The piece also tells us that armies including the British have been forced to abandon lightly armoured "patrol jeeps" and Snatch Land Rovers, and spend hundreds of millions of pounds on heavier, more cumbersome armoured protection. Yet, it then continues, "despite these efforts, casualties have still dramatically risen", with this year 28 British troops having been killed, 21 by bombs.

Had the paper tied in this piece with last Thursday's debate, the issue would really have come to life, as Ann Winterton told of the wasted money, the poor designs and those procurement mistakes, all explaining why the "efforts" in Afghanistan have not met with complete success.

Perhaps, like this blog, Ann was "too strident" and "too sanctimonious", or perhaps she is simply too detached from the real "drama" of politics. After all, how can the unnecessary deaths of soldiers begin to compare with the "tumultuous" events – as they have been described – of the last 24 hours?

One must, after all, keep a sense of proportion.