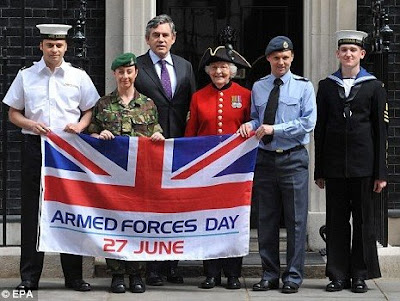 It is Max Hasting's turn in The Daily Mail to pick up on General Richards' speech – and much else – using the topical hook of Armed Forces Day which is being celebrated today for the first time.

However, in common with most of the commentariat, Hastings distils complex arguments into a "biff-bam" knockabout routine about shortage of resources and underfunding, laying the entire blame at the door of Gordon Brown as the source of all ills.

It is very much these personality politics which blight the entire defence debate, as they neglect entirely the role of the military top brass in defining the shape of the armed forces and their equipment. Thus in the world inhabited by the likes of Hastings, the politicians are always the villains and the military the blameless victims.

This was the line taken by Patrick Mercer and embraced enthusiastically by James Forsyth, web editor of The Spectator. Commenting on Gen Dannatt's speech but relying exclusively on a report in The Times as his source, he writes on the Coffee House blog with his own views.

There, he gleefully picks on but one issue highlighted by Dannatt, declaring that "Dannatt makes clear that the reason the British operation failed in the south was that there were not an adequate number of troops on the ground." And, on that slender basis does this intellectual giant conclude that:

... we either properly fund and equip our armed forces or we retreat from our role on the world stage. If the Conservative party believes that this country should be more than just a peace-keeping nation, then it will have to be prepared to increase defence spending. The problems in Iraq demonstrate that fighting wars on peacetime budgets is not sustainable.

As it happens, we agree that the original occupation force in southern Iraq was undermanned, but it is not necessarily the case that more "boots on the ground" would have improved matters. As Dannatt himself said on a different occasion, specifically of Basra, "It's a city of huge size, however many British troops or coalition troops have been there we would never have been able to impose a regime and we had no intention of doing that."

Bearing in mind that US forces further north had considerably higher manpower levels, and were no more successful in the initial stages in containing the insurgency, Dannatt does have a point. More British troops might simply have led to more conflict and a higher casualty rate.

What must be remembered, of course, is that when the US finally mounted the surge, the extra troops operated in a different political environment, with new, theatre-specific equipment and to an entirely revised doctrine. Without those changes, it is arguable that the surge would not have succeeded and, as none of those preconditions were present in the early phases of the British occupation, the chances are that more troops would have had no measurable effect.

Here, one must again recall the observations of US General John Craddock, who noted – albeit in respect of Afghanistan - that the priority was the provision of transport (particularly helicopters and mine-protected vehicles), intelligence and medical capabilities. "Too often," he said, "the forces there now are relatively fixed, because we don't have adequate tactical mobility to move them around to be able to do the jobs we need them to do."

There, was the singular problem with the British in Iraq. With the absence of the right kit, they lost tactical mobility and, even with the troops strengths that they had maintained, ceased to be effective. Yet, when US forces came to the rescue in aiding the Iraqi forces recover al Amarah, they fielded only a fraction of the forces then available to the British.

Despite this, on the rare occasion that sites such as ToryDiary take on the issue of defence, the same trite agenda prevails. We get pleas for more funding (or the protection of current funding levels), with the charge here that Brown and Blair sent our armed forces to war on a peacetime budget, again calling in aid the same superficial analysis of Dannatt's speech, using The Times as the source.

So it is that "underfunding" is locked into the narrative, with not the faintest recognition that, in blocking new equipment for Iraq, Dannatt was in fact protecting a funding allocation of £16 billion for his pet project, FRES – to say nothing of the Future Lynx helicopter. Money was never the problem. What mattered was the way it was spent.

What makes all this so topical and important though is the expectation of a new Conservative administration within a year, which will be confronting exactly the same problems with which the Labour administration had to struggle.

It is Hastings in his Daily Mail piece, however, who puts his finger on a problem of which too many are painfully aware. "There is a deafening political silence about defence, because the Tories do not think the issue wins votes," he writes, adding that: "They have notably failed to hammer the Government as it deserves about its disgraceful treatment of the Armed Forces."

The nostrum about votes should be taken with a pinch of salt. Defence invariably attracts more electoral support that is given credit by the politicians. More likely, the reluctance to engage on defence stems from David Cameron's efforts to re-brand the Conservatives as a "caring" party, hence his determination to avoid hard-edged "macho" issues such as Armed Forces equipment.

But, if in the absence of such engagement, the Tories stand by the narrative of "underspending" – all in the context of Cameron admitting that he cannot realistically plan to increase defence spending when in office - then the option of cutting some big ticket projects begins to look extremely attractive.

Hastings targets the Trident nuclear deterrent, oblivious to the fact that this does not come out of core defence funding. Scrapping this would not necessarily increase the flow of cash to other defence projects.

Whether Trident, or some other project, the big problems will come if the Tories see the liberation of funds by this means as the answer to the current problems in the Armed Forces. We need a much more sophisticated and comprehensive narrative if we are to emerge from the strategic defence review that the Tories are promising with anything like effective Armed Forces.