The right kit for the job 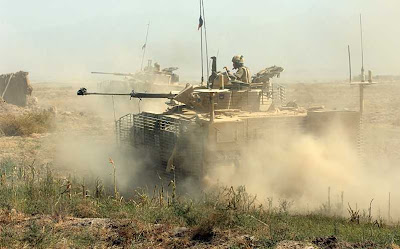 Regular readers of this blog might get the impression that we think less than highly of the MoD, the Army and the military in general. That is not the case – many of the things they do are right, but it is not our (self-appointed) role to hand out plaudits.

However, even our diet of criticism should be leavened occasionally, when something is properly done, and this is one of those occasions.

This is a report on the MoD website which records the impact of the recently arrived Warrior MICVs in Afghanistan, and the dramatic effect they are having on the tactical situation, something that was touched upon in an earlier MoD report.

Now, however, we get the "full frontal", with a report headed, "Warriors give Taliban 'a pasting'". We are told that the area around Forward Operating Base (FOB) Arnhem has seen continual fighting over the last 12 months and until recently was a Taliban stronghold. That was, says the report, until a new type of Warrior arrived in the neighbourhood, and one that is giving local villagers the confidence to come home.

There are the Warriors from Right Flank, 1st Battalion, Scots Guards provide overwatch on the edge of the Green Zone. The Guards have been at FOB Arnhem, the front line of the International Security Assistance Forces (ISAF) operations against the Taliban in southern Helmand province, since early September. But, we learn:

The base was built in August and overlooks an agricultural area several kilometres wide known as the 'green zone'. Arnhem has unfettered views into the area within which the Taliban had been operating at will.

But the Taliban have left the area after initial incursions by ISAF into the zone were followed up time and time again, culminating in Op PALK WAHEL which saw the Taliban squeezed between 2 battle groups and forced out. Right Flank played a major part providing mobility and fire support to both battle groups.

There is much more to the report, which is for once not too badly written, and includes a pithy comment from Guardsman Brown, who summarised the effect of the Warrior. "Basically," he says, "since we arrived the Warriors have given the Taliban a pasting. We haven't seen much of them since."

There is also some of the usual PR "pap" but this is partially excused by the publication of a superb shot of a Warrior (above). It would be good to see more of this type of shot, but it would be even better if we saw them in the media, with an acknowledgement that, in deploying Warriors, the Army has got it right.

It would be churlish to observe that they should have done it earlier, and that there should be more there. So we will not. But this does underline the importance of having the right kit for the job.