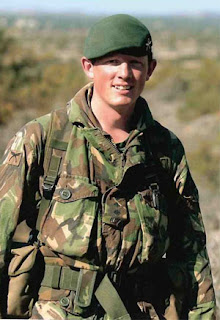 There gets to a point where you have said all you can say on a particular subject, and there is little more you can say without repeating yourself, and shouting louder.

So it is with the report of the death yesterday of Major Alexis Roberts, serving in Afghanistan with the 1st Battalion, the Royal Gurkha Rifles.

He died, we are told, as a result of an improvised explosive device just after 0800 hrs local time when the Battalion was returning to their base in Kandahar after taking part in Operation PALK WAHEL. He was commanding a convoy of the Battalion’s vehicles when he was killed, and two other soldiers were injured.

Much is being made in the media of Major Roberts being a former commanding officer of Prince William but nowhere in any of the reports, official and otherwise, is there any mention of the vehicle in which he was driving. One can only speculate that, with three involved in the incident, that it could have been a WIMIK Land Rover, but it could have been an ordinary "Wolf" Land Rover, or even a Pinzgauer. We simply do not know.

Of one thing we can be certain, it was not a mine resistant – ambush protected vehicle (MRAP) and, since there were two survivors and only one fatality, it is entirely reasonable to assert that had Major Roberts been travelling in such a vehicle, he would still be alive today. Needless to say, no-one in the national or international media thought to make that point.

By coincidence, however, local journalist and good friend Jim Greenhalf , on Bradford's Telegraph & Argus does make the general point for me, in to two-page report of this "Bradford-based political researcher's campaign for mine-resistant vehicles for our troops" (reproduced here in two parts – click to enlarge).

Although a local paper, the Telegraph & Argus's proud boast is that, within its catchment area, it sells more copies than all the national dailies combined, which means that, today, the message has got though to a good few thousand people more. 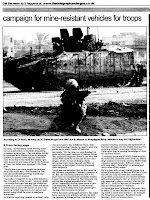 It might seem perverse that this blog, so dismissive of the media, should resort to the dead tree sellers to bring the message to a bigger audience, except that it was never our view that the blogs would replace the established media. Rather, it is a symbiotic relationship where we rely on the MSM for much of our material but they, in turn, feed of us.

In this case, much of the material came from this piece, and the fact of the existence of this blog makes the message more accessible to journalists, as well as giving it more credibility.

Soon enough, we will get another outlet, with Parliament resuming on Monday – although, if there is an election, we will be deprived of that for another month.

At the first available opportunity, however, Ann Winterton needs to remind the defence minister of a question she put in June last year, which we cited again in our previous piece, drawing attention to the possibility (expectation) that, as the Taleban lost out in direct confrontations with our troops, they would revert to the use of improvised explosive devices.

That possibility, as Major Roberts tragically discovered, has now become the reality. It is a reality which needs shouting a little louder.