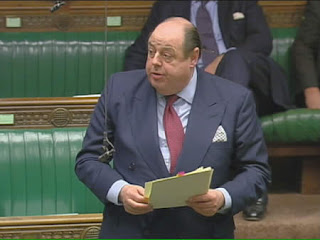 In our previous post, we promised that we would continue exploring the procurement debate of earlier this week, "mining for nuggets" as it were, to bring you the more interesting and important parts of the discussion.

One such was a point was made Nicholas Soames, himself a former Armed Forces Minister and one time officer in the 11th Hussars. Not that we hold any brief for the man: it was once said of him and his Army career that he was so stupid that even his brother officers noticed – and for the Hussars, that is saying something.

Anyhow, Soames, in his own speech, addresses the minister thus:

…will the Minister see what he can do to try to improve on the Ministry of Defence’s dismal performance in respect of telling the story of the astonishing achievements and activities of British troops on operations? The continual bleating about nobody knowing what the Army is doing on operations is entirely the fault of the structures to promote such stories. There is no reason on earth why well informed, well told stories that give away nothing, but enable people here to get some comprehension of the astonishing challenges and remarkable achievements of our troops, should not be told. It is incumbent on Ministers to review the situation and see what they can do to drive it forward. At the Ministry of Defence, in both military and civilian bureaucracies, there is a sort of leaden resolve to say no to everything. I urge the Minister to improve on that.

It is left to Derek Twigg at the end of the debate to respond, echoing the "important point" made, "…the fact that what our armed forces are doing in Iraq and Afghanistan is not getting wider recognition in the press and elsewhere."

That, in fact, was not the point made by Soames, who had complained of the Ministry of Defence's "dismal performance". However, Twigg continues:

General Dannatt has also recently raised this issue, and we share those frustrations. Reporters are embedded in both theatres and, as the hon. Gentleman will know, there are opportunities to talk to our armed forces personnel. They could also go to Headley Court, where on two or three occasions I have spoken to them. There are plenty of opportunities to do more and plenty of information exists. A number of documentaries have been made and there have been TV involvements, but I agree that more should be done, and I urge those in the media to do more to publicise the fantastic bravery of our armed forces. My hon. Friends and I will continue to do as much as we can to ensure that the message about the bravery and professionalism of our armed forces gets across, but we cannot force people to print something or to show something.

One cannot call Twigg stupid – we do not know enough of him to applaud him thus - but he certainly seems to typify both MPs and many in the corporate world who see the media as the primary source of publicity. What they do not see – or do not understand – is that the world of mass communication is changing with incredible rapidity, and that the key medium is now the Internet. 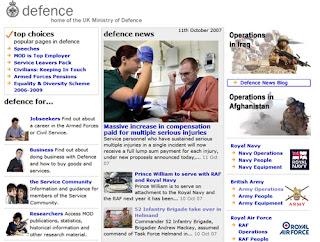 Here, as we have oft noted, the MoD has at its disposal funds of which we could only imagine, and a web site with a domain name to kill for. Further, almost every Regiment and branch of the Services has its own web site, the culmination of which gives the MoD every opportunity to put out its story.

Not only does the MoD not need the media but, if the sites under their control were imaginatively used, they would provide an ongoing resource for journalists (and bloggers) who would be only too happy to lift material from the site (the difference being that bloggers tend to acknowledge their sources while the "professionals" are more likely to pass off the work as their own).

But, turning to the main "resource", the MoD website (illustrated above), what do we see?

Currently - at the time of writing - the three headline stories were the increased compensation to injured troops (covered widely by the media), Prince William (covered obsessively by the media) and a story on the deployment of 52 Brigade to Helmund. 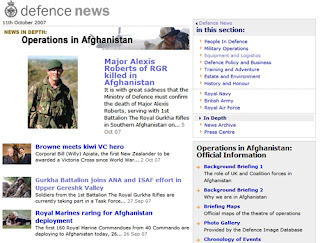 Following that third link, which is the only one on the site specific to troop operations in Afghanistan, and we learn from Royal Anglian Regiment commanding officer Lieutenant Colonel Stuart Birrell - in the dreadful, leaden prose of corporate PR - that "We have undergone a comprehensive training package to get us to this point, and now we are here we are keen to get started."

Hold the front page: British troops "have undergone a comprehensive training package". You can see The Sun simply flying out of the newsagents, when that news leaks out.

Turning to the specific page on Afghanistan (illustrated), however, this is no better. The page is dominated by the picture of Major Alexis Roberts and the eulogies devoted to him – dated 7 October. The next story, is dated 2 October and the one under that the 27 September. Are we really to believe that in now 15 days, there have only been three Afghanistan-related stories worth publishing – one of which is "Browne meets Kiwi VC hero"? 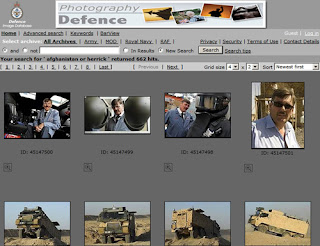 Still, at least one can follow the link to the "photo gallery", to see the pictures of our brave troops in action in Afghanistan? Er … no. The latest postings date from 4 September and show Armed Forces Minister Bob Ainsworth visiting a defence manufacturer in Coventry.

This is not so much neglect, as criminal negligence. As we have written so often – most recently my colleague – "If we do not win the propaganda war we may as well not bother with the shooting one." We are not the first to observe that the Internet is part of the battlefield yet, here is the MoD with a potentially powerful and effective weapon in that theatre, and it is conceding the ground to the enemy.

Earlier, we noted Stirrup's complaints about poor communication - with us suggesting that he could exert his influence on the MoD website – and we have also complained about the general paucity of information and the tendency to use the website for propaganda rather than information – addressing our comments that time to Dannatt.

Whether Dannatt, Strirrup or Twigg, though, this issue must be sorted. Good information in counter-insurgency operations (or any war) is not an optional extra. It is a central part of the campaign - in this case every bit as important as new Mastiffs for our troops - and the MoD is performing very, very badly indeed.