"Dammit, I spilled my water bottle"

That was comment from the Canadian driver of a Husky demining vehicle (pictured above) after it had been hit by a huge bomb on a road in Afghanistan.

As the South African built vehicle, one of a pair, was making its way along Route Foster - a narrow, winding highway that runs west of Forward Operating Base Masum Ghar in Kandahar province – there was a loud bang, the acrid smell of explosives and a blinding cloud of dust. The front end of the Husky was nowhere to be seen and, where the road had been, there was a crater six feet wide by three feet deep.

However, the rest of the vehicle was intact, including the driver, Cpl. Pierre Brule, in his cockpit. Said Brule, after complaining about his water bottle, "It was too quick to be scared anyway. The vehicle just dropped to the ground so it was pretty cool."

The Husky, pictured above, is one of the most recent acquisitions of the Canadian Armed Forces, part of what is known technically as "The Expedient Route Opening Capability" (EROC) systems. These, pioneered by US Forces, comprise the Husky, the Buffalo mine detection vehicle and the Cougar 6x6 mine protected vehicle.

The Husky goes first, attempting to detect or explode buried explosives. The Buffalo, with its extendable hydraulic arm, investigates suspicious objects and the Cougars follow up, carrying the bomb disposal officers and their equipment, to deal with confirmed devices.

This team is changing the tempo of operations in the Canadian sector, moving from passive defence with armoured vehicles, to searching actively for buried improvised explosive devices.

And these answer the quite legitimate concerns of some British military commentators, who argued that the introduction of better protected vehicles would simply lead to the use by the terrorists of bigger bombs. This is indeed what they are doing but that necessarily means there are fewer of them and, being bigger, they are easier to find. 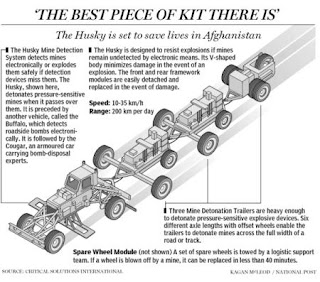 The Canadians themselves ordered the equipment in May last year and received deliveries in September of this year, convinced they would save lives, and they have been doing just that. Unsurprisingly, they describe it as, "the best piece of kit there is".

The British, who have been slow even to introduce protected vehicles, are catching up on this front, but they are still behind the curve – having none of this equipment. As the Taliban react to their improved vehicles, crews – even with better armour – will still be at risk. It is, therefore, imperative that serious consideration is given rapidly to acquiring the capabilities which first the Americans and now the Canadians have so ably demonstrated as life-saving.

We really cannot afford another "Snatch" Land Rover situation, where the Army and the MoD react after the event – and then slowly – to a hazard which is both predictable and avoidable.