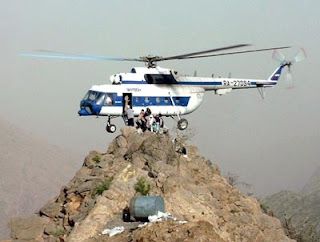 Some insight into the back-biting and dog-in-the-manger attitude of (some of) the military comes in an intriguing article by Tom Coghlan in The Daily Telegraph today on the plans by Nato to hire 20 helicopters from civilian contractors to support troops in Afghanistan.

This is something this blog has campaigned for vigorously, not only because it is a quick answer to the chronic shortage of helicopters, but also because it is a cheaper option and brings to the theatre equipment which is often better suited to the conditions. Furthermore, it makes available a cadre of highly experienced – mostly ex-military – pilots and crews, whose expertise could be a valuable asset in a difficult campaign.

But rather than applaud this imaginative and welcome development, Coghlan is distinctly downbeat, writing under a headline, "British troops 'to depend on rented helicopters'", as if this was an inferior option.

Opening his piece by telling us that "British troops in Afghanistan could soon be relying for their resupply on rented civilian helicopters," Coughlan tells us that the new plan is to rent 20 large transport helicopters from civilian contractors. They would be used in the south of the country, including Helmand province, to meet the needs of Britain, Canada and Holland who have troops engaged in heavy fighting.

However, in what is clearly a sign of the military briefing against the proposal, Coughlan then goes on to write:

Military sources in southern Afghanistan questioned whether helicopters rented from private security companies would meet the standards required to transport British forces. Britain and other European countries fly helicopters that are equipped with complex defensive equipment to detect and defeat heat-seeking missiles. Pilots are also trained to perform difficult low-level evasive flying to throw the aim of Taliban ground fire.

He adds that 18 military helicopters have been lost in Afghanistan since 2001 with the loss of 110 soldiers and airmen. The last was a US Chinook transport helicopter in May. Seven people died, including a British soldier.

This wholly negative picture is a travesty. As we have pointed out before, the helicopters under consideration are piloted in the main by ex-military pilots, many of whom are instructors who taught the current generation of military pilots their trade. Others are ex-special forces and some of them are already in theatre, working with US special forces, and thus have acquired considerable experience of the conditions and operational demands.

As to the "complex defensive equipment", fitting this to the civilian helicopters is no big deal – a complete suite can be fitted in a few days, and the pilots are well used to operating it.

The real story, therefore, is the reluctance of the military to see civilian contractors encroach on "their" war. Some of this is fuelled by a fear of the competition, with the civilians able to operate more flexibly, sometimes in conditions where military aircraft like the Lynx simply cannot fly.

And since they are vastly cheaper, they provide an unfavourable comparison, which might have the politicians asking why they are funding expensive military operations when they can get much more for their money by using contractors.

In effect, what we have, therefore, is the military crying "hands off, it's our war" – an exercise in protecting their own interests rather than going for what is needed.

Furthermore, the need for more helicopters is real. As Coughlan writes, in concluding his piece, "The need for helicopters has become more acute in response to the growing threat from roadside bombs, increasingly acquired via Iran." This dog-in-the-manger attitude costs lives. It is a pity that this is not recognised by The Telegraph.