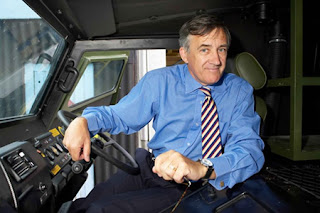 "So we have an undeclared, under-the-counter payment to a peer to introduce a lobbyist pimping on behalf of arms dealers to the Minister, Lord Drayson, in charge of buying arms …" writes Guido Fawkes.

He is referring to the piece on the front page of The Guardian today, which reports that former Labour frontbencher Lord Hoyle - previously Doug Hoyle, an ex-government whip and former MP for Warrington – was paid cash by a lobbyist for an introduction to Lord Drayson, the defence procurement minister.

The lobbyist in question was Michael (Mike) Wood, who trades as Whitehall Advisers, a former RAF officer who works for BAE and other smaller arms companies to help get them contracts. And, says The Guardian, he has free run of the palace of Westminster because he has a security pass as a "research assistant" to another MP.

Only down-page, however, do we find that his parliamentary pass as a "research assistant" comes from Gerald Howarth, the Conservative shadow defence minister responsible for procurement.

This somewhat dubious relationship between Mike Wood and Howarth was in fact reported by the Independent on Sunday on 10 October 2004 – over three years ago – when the paper noted that Wood’s clients included BAE, Airbus and MBDA, together responsible for UK defence contracts worth billions of pounds.

Also noted by the paper was that the arrangement, "which allows Mr Wood to enter the House of Commons at will", runs counter to the voluntary code of conduct that regulates political consultants. 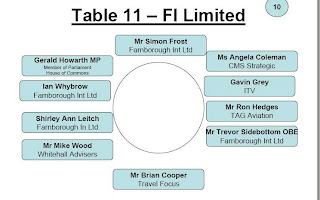 Despite the "outing", Howarth was evidently unrepentant in continuing his close relationship with Wood, even to the extent of sharing a table with him at the annual SBAC dinner at Farnborough Air show last year.

Wood’s company, however, is quite explicit about its activities. On a company website, it is described in this fashion:

Whitehall Advisers Ltd was formed in 1997 to offer specialist advice to companies operating in the aerospace industry and specifically to those with interests in the UK Defence sector. The Company possesses an unusual blend of military and commercial expertise and has been involved in the complete spectrum of the equipment procurement cycle both in the MOD and in Industry.

On the industrial and political fronts, the team has played a key role in several major UK equipment procurement campaigns, totalling around £10 billion. This involved responsibility for the bidding process, formulation of marketing strategies and detailed plans, government relations and the role of political lobbying, public relations, the industrial dimension and teaming issues, and finally contract negotiations - in short, the whole spectrum of a successful campaign. The team can offer either a "one-stop shop" service covering all elements of a campaign or assist an "in-country" team with specialist advice.

That Howarth is so close to a self-declared arms lobbyist does make one wonder. As this blog has frequently noted – he has a habit of pulling his punches when it comes to attacking equipment purchases, and has also been rather quick to endorse some rather suspect equipment.

Thus, while Lord Hoyle may be in error taking money from Wood to arrange a meeting with Drayson, can there be any less concern that there is such a close relationship between Wood and Howarth? After all, Gerald Howarth's brief also includes procurement and it is he who should be the major critic of the government's poor procurement record. Can he really do that job effectively while also cosying up to a lobbyist?