Somebody has been listening 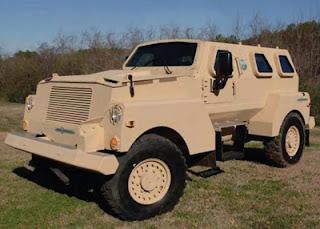 According to DefenseNews, the MoD is to add another 148 Mastiff MRAP vehicles to its existing 108-strong fleet, more than doubling the number, with the bulk of them going to Afghanistan.

This order is being executed by way of an urgent operational requirement, which means it will be funded direct from the Treasury, rather than the defence budget. Deliveries are expected by 2009, once agreement with the US (which already has its own orders for 1,900 of the vehicles in place) for priority production is in place.

Furthermore, sources are suggesting that the MoD may also order a batch of Cheetah light tactical four-wheel-drive vehicles (pictured), for a British special forces requirement.

This, we got a hint of in April this year when the MoD issued an expression of interest in 180 of what it termed the "Medium Protected Patrol Vehicle" (MPPV). The contract value was to be between £20-100 million for a wheeled vehicles with an approximate gross vehicle weight of 14 ton, capable of carrying up to seven crew members.

Some sources are now saying that this may be upped to 250 of the vehicles, which employ the same mine protection technology as the bigger Mastiff, and would provide a partial replacement for the dangerously vulnerable WIMIK Land Rovers and Pinzgauer Vectors.

The details will emerge today at 3.30pm in the Commons when Gordon Brown makes a statement on Iraq, which will cover troop numbers and deployment. Then we will see a much overdue enhancement in the protection level afforded to our troops. It will be good to know that someone, at last, has been listening.