It's the balance, stoopid! 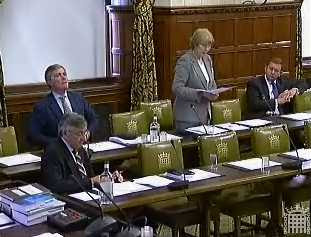 Yesterday morning, without fanfare, Lady Winterton brought "Next-War-itis" to the House of Commons.

This was the theme of the recent speech by US defence secretary Robert Gates in which he called for the US military to focus "more on winning in Iraq and preparing to fight other insurgencies and less on possible big wars with other countries".

And, if much of the US defence establishment was obsessed with future conflicts, neglecting the wars in Iraq and Afghanistan, so too was the British establishment – or so it was charged.

Of course, the MoD claims it has had the vaccination against this dreaded disease, telling us recently that, "We are determined to do more to support our people here and on the front line…", pledging then to "better prioritise our spending plans".

But Anne Winterton was not convinced. We do not know in which direction the military is looking, she said. But we get some clue from this month's Soldier magazine. There, Chief of the General Staff, General Sir Richard Dannatt purrs about his new toys, telling us that the Piranha V heralds the "start of a new era" for the Army.

This said Dannatt, "maintains the progress of the FRES programme, which is my highest priority after support to operations." It will, he adds, form the backbone of the Army’s future armoured vehicle requirements. Mastiffs are all very well, but this beast will allow the Army "to conduct a wider range of operations in an uncertain and changing world."

To Ann, this was the proverbial red rag to the bull. Let us have it spelled out exactly what sort of operations we are expecting in the future, she demanded - or is this a case of next-war-itis?

There lies the problem. FRES is not designed for counter-insurgency operations in Iraq and Afghanistan – the subject of this debate in Westminster Hall. But the brass are saying that the FRES vehicle, for which Piranha V has been provisionally chosen, has a dual role. It can be used for high-intensity warfare and counter-insurgency.

Ladies of Ann Winterton's breeding do not say "b*****ks!" But, well she might.

As to supporting our people in the front line, in Afghanistan – the insurgents as she predicted – have resorted to "various explosive devices". To counter them, the MoD has 282 Mastiffs in use or ordered. Some 157 Ridgebacks and 24 Bushmasters are also on order. Thus, we have 463 mine/IED proofed vehicles, specifically designed for counter-insurgency warfare.

Against that, we have 169 Pinzgauer Vectors - not designed to protect soldiers from mines or IEDs. There are 180 M-WMIKs (otherwise known as Jackals) and the Army wants 2,000 Piranha Vs – as yet still a paper vehicle, not off the drawing board – another vehicle which is not well protected against mines and IEDs.

"With the best will in the world," she says, "one could hardly say that that is a very balanced mixture, bearing it in mind that the whole future Army structure is geared to the latter type." This was not, she added pointedly, "making present operations the top priority".

As we are likely to be in Afghanistan for the long term, that could realistically be at least 20 years down the road. How many more conflicts of that nature will the UK be engaged in or have been engaged in by then, with 2,349 vehicles that are not particularly suited to purpose, compared with 463 vehicles that have a proven track record in counter-insurgency operations?

At this point, Conservative MP, Philip Hollobone, intervened to remind us that the "percentage of fatalities of UK service personnel resulting from IEDs or mines is 27 percent in Afghanistan and 28 percent in Iraq." Kevan Jones from the dark side (Labour) then also intervened to say that, the last time he had been in Basra, he had seen a Mastiff vehicle that had driven over an IED. The crew had survived. The Mastiff, he said, was good news and had clearly led to a reduction in casualties from IEDs.

This is where it started getting messy. The minister for the Armed Forces (Bob Ainsworth) then got stuck in, saying that Anne had put only three vehicles "on the right side of the line" and all the rest on the wrong side. "We cannot conduct effective operations in Afghanistan with only those three vehicles. No commander can do that," he protested.

It was a question of balance, Ann countered: 463 vehicles designed specifically for blast protection, with their V-shaped hulls, against 2,349 which were not. And, when it came to the Piranha V, there were all sorts of problems with this machine, not least that it was "incredibly expensive". Being designed to fulfil the original concept of FRES – a network-enabled system of vehicles that would engage the enemy at a distance – it is not best suited for the kind of warfare that our troops are encountering now. The enemy is not at a distance and is often indistinguishable from the local population. The danger is all around them.

Intervention from Kevan Jones there came again, with a charge that commanders needed "a range of vehicles, including lightly armoured vehicles". Yes, I know that said Winterton – or words to that effect – it's the balance stoopid … 463 against 2,349. The insurgents aim to send as many troops home in body bags as possible – we need more vehicles designed to keep them alive.

Thus batted down – although Jones was to rise again, the stake not yet driven through his heart – Ann switched tack.

In order to defeat any insurgency, she said, it is necessary to train the host country's own military forces so that they can deal with the problem and protect their own people. That is happening successfully in Iraq and Afghanistan; their armies are doing a great job and allowing our forces gradually to be withdrawn.

However, it was also important to have a certain amount of parity between our equipment and that of the host country – seen in Iraq where the Army has the same or better vehicles than ours. But, when we come to the Royal Air Force, the contrast is extreme. The situation is nothing less than an unmitigated disaster.

For Afghanistan to succeed after the withdrawal of UK and other troops (in fact, in order to allow us to withdraw), it must have sufficient air power. Yet could the Afghan air force ever use the Eurofighter? We need turbo-prop aircraft, which the host country's pilots can be trained to use alongside our own pilots, the famous Tucano option – with all the added advantage that we get from that type of machine.

Equally, she said, reconnaissance operations should have their own aircraft, such as the Pilatus Porter PC-6, which can operate with the patrol being able to land and take off within very short distances indeed, acting as an evacuation carrier and a general supply vehicle. These aircraft should be operated by other ranks within the Army, and we should learn the lessons from other successful counter-insurgency forces such as the Rhodesians.

Then Anne turned to the economics. There is a constant shortage of helicopters, yet the Merlin is a very good, if extremely expensive, helicopter. The RAF's Mk 3 Merlins cost £19 million each. The six Danish ones cost £29.3 million each and £34,000 an hour to run. She had to repeat that figure to Patrick Mercer, who seemed stunned by the figure,

The attitude in the UK seems to be that the we need the best to cover every eventuality, Ann continued, and therefore the nation will cough up the funds for that. But the military are not living in the real world if they believe that they can have anything at any price. That is one of the reasons why the UK is short of what it actually needs. Rather, we need simple, robust platforms that will last in the long term. They must also carry the latest technology, but at the same time they must be as simple as possible to maintain.

So it came to finish off the speech. Her closing themes were "finance and the benefit to the nation of a sound defence policy."

Whichever party wins the next general election, she warned, some very large financial commitments have been made by this Government that will come into effect during the period from 2010 to 2015. If the military believe that they will get more money out of a Conservative government, I think that they are deluding themselves. That extra money is not likely to be forthcoming, bearing it in mind that the country will probably be broke by then.

Thus she said: "The mantra that our armed forces are underfunded is often repeated—indeed, there is some truth in it - but how the money for our forces is spent also needs to be challenged and I believe that it is a pertinent issue. I have pointed out in previous debates that the wastage in the defence budget has been enormous, mainly due to unclear or ulterior motives and objectives."

If we are funding "next war-itis", present operations will either be starved of cash or denied the most suitable platforms in sufficient quantities at the time when they are most needed. The MOD, she added, is doing its best to learn from recent hard lessons, but it has not been much helped by certain factions within the military.

We rely on our armed services for the defence of the nation but it is highly unlikely that any force will directly attack our shores. Instead, the threat to us now is far more subtle and difficult to counter. The enemy is within and around us, and we cannot always differentiate between friend and foe. Terrorism is the greatest evil and we have to be better prepared to defeat it, not least because the United Kingdom needs a stable world for trade, which is the lifeblood of our economic survival.

So, said Ann, I share the belief of Robert Gates that the top military and political priority should be the success of COIN operations, to ensure that the breeding grounds of instability in the world, which are the greatest danger to our people, are neutralised. It is within that sector that British forces could excel and, indeed, are excelling against the odds. It is up to the military to explain where their priorities will lie in future, from a basis of the Government of the day giving clear directional leadership.

The United Kingdom is no longer a global power and, unlike the Americans, we cannot afford two armies — one for counter-insurgency and the other for conventional warfare involving large-scale manoeuvres. I believe that we should concentrate on undertaking counter-insurgency and similar operations exceptionally well, rather than diluting our efforts and resources. We should face facts and recognise that the United Kingdom can no longer fulfil all its aspirations as far as defence is concerned. Stretched resources and manpower will limit what we can achieve in the future.

In Part II of this post, I will deal with the response to this speech.