Tell it to the Marines! 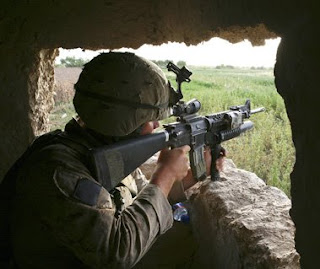 "Afghan insurgents 'on brink of defeat'" was the headline in The Daily Telegraph yesterday, meriting not only a front-page squib, but also a more detailed story inside the book.

That is probably too bullish a construction on the situation in Afghanistan, even if (or especially as) it is conveyed to us by Thomas Harding, the paper's defence correspondent, who was in Lashkar Gah – the provincial capital of Helmand – at the time of filing. A more sober assessment comes from defence secretary Des Browne, who finds "progress and optimism".

Thus notwithstanding, the piece attributes the "success" to "missions by special forces and air strikes by unmanned drones" which have "decapitated" the Taliban and brought the war in Afghanistan to a "tipping point".

This, we are told, is according to the commander of British forces in Helmand, Brig Mark Carleton-Smith. He is cited as saying that the new "precise, surgical" tactics have killed scores of insurgent leaders and made it extremely difficult for Pakistan-based Taliban leaders to prosecute the campaign.

In the past two years an estimated 7,000 Taliban have been killed, the majority in southern and eastern Afghanistan. But it is the "very effective targeted decapitation operations" that have removed "several echelons of commanders". It is this that has left the insurgents on the brink of defeat, we are told. "The tide is clearly ebbing not flowing for them. Their chain of command is disrupted and they are short of weapons and ammunition."

While we have no reason to doubt the effect of these operations, what makes the piece remarkable is that the activities of the US forces have been "airbrushed" out of the account.

Yet it was, after all, elements of the US 82nd Airborne Division which were pivotal in the re-taking of Musa Qala at the end of last year – with the help of considerable US air support assets.

And, for all the apparent triumphalism, this was an "opportunistic" operation which had not been scheduled by the British command and, for which – it appears – they were unprepared, with the normal leave rotation in process amongst the battle groups.

Further, after two years of unsuccessful attempts by British troops, it was the US 24th Marine Expeditionary Unit which, in late April, took Garmsir in southern Helmand.

With fighting continuing - almost entirely unreported by the British MSM - Col. Pete Petronzio, US Marine commander, describes the current action as "… attempting to put a stopper in the bottle," claiming that his troops are, "having an extremely positive effect on their [the Taleban's] south-to-north flow".

That might just be partially responsible for the shortage of weapons and ammunition described by Harding, but we are not allowed to know that.

At this stage, it must be noted that the copy which was filed by Harding is not necessarily the same that appeared in the newspaper. It is not unknown for material submitted to be substantially altered by the London desk, reflecting the prevailing editorial bias. Correspondents have been known to disown the final versions of stories submitted by them, as unrecognisable from the original. 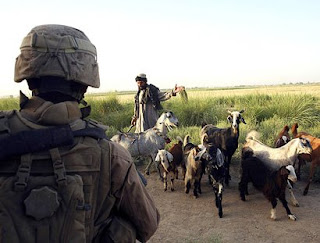 Wherever the fault lies, the omission of any reference to the Americans cannot be accidental. There are numerous references to US activity, including a long descriptive piece in The New York Times published only a few days ago, as well as reports in the Canadian Media.

In the UK, the tendency of Hollywood to portray US forces as having won World War II single-handed is the stuff of legend but now, it seems we are seeing the reverse effect, played out for real in the pages of the British media.

Such coverage of Afghanistan as there is in the British media – and there is very little – is determinedly Anglo-centric. There seems very little recognition or understanding that the war is being conducted by a multi-national coalition, in which the UK is second to the Americans, currently fielding fewer troops even in its primary area of responsibility, Helmand province.

On the basis of current US activity in the province, it would be very easy to make the case that the Marines are covering for the earlier failures of the British (with a similar case being made for Musa Qala), but the Americans make no such claims.

Col. Petronzio, in fact, is generous about British involvement. Against suggestions to the contrary, he says of the Marines' activities in Garmsir, "Absolutely not have we come to anyone's rescue … It was an incredibly tough place to be. With the forces they had available, they [the British] did a great job."

It would only be equitable – and courteous – if The Daily Telegraph and the rest of the British media could return the compliment. We are fighting as part of a coalition and there is no shame in relying on support from our allies. But, rather than tell us how appreciative we are, perhaps our media might do the really decent thing and tell it to the Marines.

Not to do so cheapens our effort, and diminishes us all.