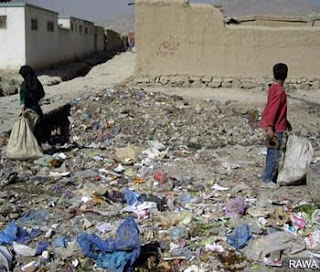 Throughout this dissertation runs the central theme that the active "shooting war" and the reconstruction programme are not (or should not be) separate activities but an integral part of the whole, the two dovetailing together and feeding off each other.

We have also made the point that restoration of the agricultural base is the key to success: fix the agriculture and you fix the nation, we wrote. To that extent, military priorities – and all others – should be directed at that endeavour.

In terms of policy, however, the reality was that, at the beginning of the reconstruction programme, agriculture was so low down the pecking order that it was not run directly by the US government – or even the Afghani government. Instead - like many of the reconstruction activities in both Iraq and Afghanistan - it has been subcontracted to a private company under contract. In effect, a vital part of winning the war has been outsourced.

Here, it has to be said that there is no rooted objection to the use of private contractors – they often being more efficient in the provision of services than any government agency. But their effectiveness – and value for money – depends entirely on their working within a sound policy framework, which should thus determine a tightly define (and achievable) contract specification. It then should go without saying that the contract process should be entirely open, with awards based on merit first and then cost, and that there should be good supervision and then proper accountability.

For the redevelopment of Afghani agriculture, the contract was awarded to a company called Chemonics International, Inc. (known more commonly by its short-form: Chemonics), a 3-year cost-plus, fixed-fee contract for $153.4 million under a programme labelled the: Rebuilding Agricultural Markets Program (RAMP). It took effect in July 2003, the first phase of which was to last until June 2006.

From the outset, the strategic objective of RAMP, as defined by the company was:

…to enhance the food security and increase the incomes of Afghanistan’s rural population by a) increasing agricultural productivity and output, and b) increasing incomes by making the linkages between producers, processors and markets more efficient.

Not only does this appear fundamentally sound, the programme structure on paper also look adequate, comprising management, administration and technical assistance; physical infrastructure reconstruction or repair; rural financial services; and agricultural technology and market development. Nor could there be any objection to the overall philosophy (as explained in a company report). It was precisely that which one would expect to see:

The programmatic starting point for increasing marketable value is the final market (demander), not the farmer (supplier). The following sections support the "produce what you can sell" principle by first describing the contractor's accomplishments to date with regards to identifying markets and developing market systems, enhancing processing facilities, and increasing the quality and yield of production – and then briefly explaining RAMP/Chemonics' 2006 planned activities related to these value chain elements.

There was, however, to prove a difference between paper and practice. In March 2006, the Office of the Inspector General published an audit of the programme, giving what amounted to a damning indictment:

USAID/Afghanistan did not properly administer its contract with Chemonics with regards to updated work plans, changed scope of work, and annual evaluations of contractor performance. A contractual relationship between USAID/Afghanistan and Chemonics required both parties to fulfill specific responsibilities in order to manage and implement the contract activities. Furthermore, USAID/Afghanistan's decision to use a contract instrument to implement this program required it to follow the applicable Federal Acquisition Regulation, which it did not do. The reasons why USAID/Afghanistan did not properly administer the contract were because other tasks took priority, and the Mission did not enforce the contract terms with Chemonics. As a result, USAID/Afghanistan's contract administration could result in the inefficient use of U.S. government resources. Additionally, the Mission did not have timely updates on the performance of Chemonics—updates which serve as a relevant, important source of information in responsibility determinations and future contract awards.

Crucial in that condemnation were the words, "The reasons why USAID/Afghanistan did not properly administer the contract were because other tasks took priority …". In effect, the US authorities, having subcontracted the vital task of regenerating the Afghani agricultural system, then took very little interest in the progress of the work. It became, "out of sight, out of mind". 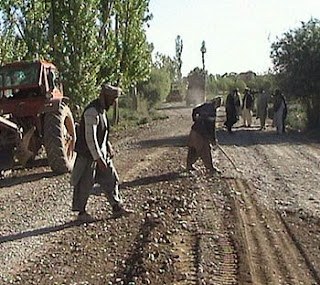 One of Chemonics' more important failures was that it did not meet a target set for 30 September 2005 for rehabilitating the number of kilometers of farm-to-market roads. Originally, it had been tasked to rehabilitating 555 kilometers but by that time had actually completed only 391Km. The reasons cited were: "security and poor subcontractor performance issues" but the cumulative delays meant that the end-of-contract target of rehabilitating 900 Km was no met by 2 July 2006.

More to the point – but not questioned by the Inspector General was the relationship between production orientated and marketing work. While Chemonics had declared that the "starting point" for its programme was the final market and not the farmer, in the contract period it has spent $12,207,587 on "combined contracts" for canal rehabilitation and farm to market roads, $20,476,970 on rehabilitation of canals and $3,800,759 on rehabilitating roads. 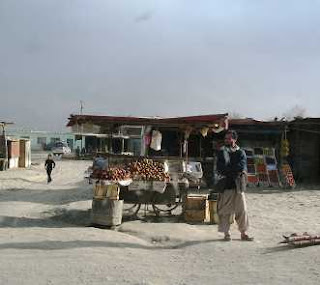 The point, of course, is that the canals, as part of the crop irrigation system, were devoted to increasing production, whereas the roads were the related to improving marketing. Because of the combined contracts, the exact proportion spent on each type of project cannot be estimated but, despite that, it is clear that by far the bulk of the expenditure went on the production side of the equation. And, out of the $153,163,766 directly spent on projects, the only other market-orientated works were "market centres", which attracted a mere $3,964,585 and a vegetable dehydration factory which cost $3,022,887.

As always, though, the bland figures do not tell the whole story. It is interesting that the "farm-to-market" road rehabilitation programme was managed by Chemonics. The strategic road programme, however, was contracted out to a completely different group and there was not always any co-ordination between the two programmes. Thus, a farm-to-market road could end up being a "road to nowhere", the "market centre" lacking communications with the wider market.

Nor indeed were the "market centres" always of any great value, journalist Fariba Nawa describing one as "a small patio with a pitched roof built on the main road in Parwan where farmers from the co-operative were supposed to sell their harvest". It was, she noted, "vacant and covered with dust."

This example is one of many which reinforces a sense of unease about the use of contractors in Afghanistan, one other being more recent concern expressed about the amount of aid money which is being spent on expatriate salaries – typically 200 times the average annual salary of an Afghan civil servant.

Complaints have also been aired that some 40 percent of the aid pledged to Afghanistan returns to donor countries, spent "on corporate profits and consultancy fees," inviting the image of "fat cats" creaming off money intended for the poor who are forced to rummage in waste dumps for their livings (see picture at top of post – used in precisely that context). 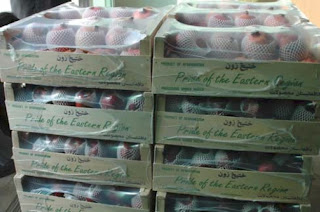 For their money, though, Chemonics most recently points to a piece published by the IHT in November 2007. This retailed news of a development on marketing pomegranates in Kandahar, where USAID was spending $6.6 million on agricultural and marketing assistance programs.

This had involved the construction of a new cold storage facility and the implementation of quality control programmes, doubling the price of pomegranates to 54 cents per pound. The programme, we were told, had helped ship 690 tons to India, 600 to Pakistan and 36 to Dubai, mostly on outgoing military flights. Furthermore, a sample half-ton shipment had been sent to the United States.

Oddly though, as Kandahar is in the sector administered by the Canadians, they too are claiming credit, describing the project as Canada's Afghan legacy. First there, however, were the Indians with a $1.5 million cold storage investment in 2005.

Nevertheless, in 2007, according to Time magazine Afghani farmers had harvested between 33,000 and 44,000 tons of the fruit, of which some 1,102 tons had been exported, most to India, Dubai and Singapore. Tiny quantities had found their way to London and Vancouver, while "strict phytosanitary requirements" had kept them out of the US. And, with this year's harvest expected to reach 68,000 tons, with exports rising "to as much as 3,000 tons", this was regarded as a success.

It says something that USAID was driven to announce that in February, 6,000 kg of end-of-season pomegranates had been sold to India - a mere six tons.

Then, at the end of May, success came, from an unlikely source, without USAID involvement. An agreement was signed with two Japanese companies to export up to 20,000 tonnes of pomegranates to Japan this year. Strangely, the provincial chamber of commerce head, Razaq Rafiqi, complained that the central government was not doing enough to help fruit farmers in the province. 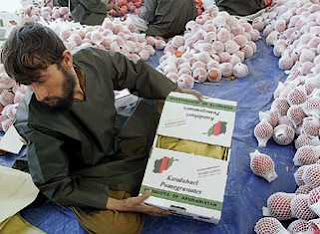 Nevertheless, with officials claiming that fresh and dry fruits worth US$35 million were exported last year from Kandahar province – mostly to Saudi Arabia and the United Arab Emirates - they are now confident of a considerable increase this year.

Long before this had happened, though, journalist Fariba Nawa reminded us that, among the primary goals set out by USAID in the Chemonics contract was the establishment of reliable domestic and international markets for Afghan agricultural goods. By nearly all accounts but its own, she wrote, Chemonics has been a failure in this regard.

It is hard to disagree in principle, but some of the fault must lie with the State Department and its own USAID organisation for taking its eye off the ball. Bureaucracies, the world over, it seems, are universally incapable of anything which could be considered approximating efficiency. Even private enterprise in conjunction with a state apparatus hardly seems better.

For pomegranate growers, unfettered private enterprise seems to have offered a better deal, coming from outside the protective cordon of the European and American trade systems. In this one, important instance, Japan has done more than either to advance the global war against terror. And, in the final analysis, it is more of the same that is eventually going to beat the insurgency in Afghanistan. A supermarket buyer, waving a substantial contract, is probably worth more than a thousand troops – and certainly more than 10,000 aid officials.