Winning the war – Part I: The wrong solutions? 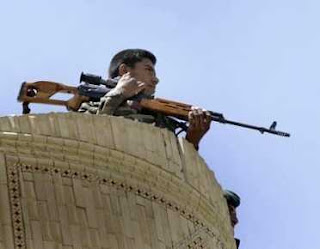 The last fortnight has been an unhappy one for British forces in Afghanistan. Deaths reached 106 since the start of military operations in November 2001, with nine killed in the last ten days, including the first woman soldier.

Add to that the daring jailbreak in Kandahar, freeing hundreds of Taleban prisoners, and the open insolence of the insurgents who seized a number of villages in the fertile Arghandab valley, a mere 12 miles northwest of Kandahar, and a picture of gloom descends upon this troubled country. The prevailing image is of a floundering Afghan government struggling to convince the population that they have a grip on security.

It is unsurprising, therefore, that there should have been a rush of analytical pieces in the weekend newspapers. We have selected four such - two each from the Saturday and Sunday - summarising them here and, in Part II of our post, adding our own commentary and observations, using these then to develop ideas on "winning the war".

Starting with the analytical pieces from the Saturday crop, one is from Thomas Harding, the defence correspondent at The Daily Telegraph. The other, marking a completely contrasting style, is from ex-MP and columnist Matthew Parris, in The Times. From Sunday, one piece comes from ex-soldier and now MP, Patrick Mercer, writing in The Independent. The other is from Sunday Times columnist, Simon Jenkins.

Taking the Saturday pieces, the contrast between the two articles we have selected is, in fact, more extreme than would at first appear. UK-based Parris, without military experience, crafts his piece on the back of research from his paper's cuttings library. Harding, on the other hand – an ex-Para officer - writes from the perspective of having recently spent two weeks out in Afghanistan, on patrol with his former regiment, with the benefit also of having spoken with senior military officers in theatre.

Both have interesting things to say, and we are not going to argue that Harding's view – based on the realities on the ground – should prevail. Not for us is the easy sneer, the like of which was delivered by Labour MP Kevan Jones in response to Ann Winterton's recent speech on counterinsurgency operations in Afghanistan.

It was then that Jones expressed his wariness of "politicians becoming armchair generals," painting a picture of Ann Winterton, sitting at home at night "going through statistics and, obviously, gaining a vast knowledge about various pieces of kit and then moving them around some fancy battlefield on her kitchen table."

From his "experience of visiting Iraq five times and Afghanistan on three occasions", he did not think "that what she said is realistic or reflects what is happening on the ground."

We are fully aware of this "I was there" syndrome, as if presence "on the ground" necessarily conferred any great perspicacity, recalling indeed that, against many accounts of the events in Basra – and especially the recent Iraqi Army operations – this blog called it right, when many commentators, including those with "experience of visiting Iraq", got it badly wrong. 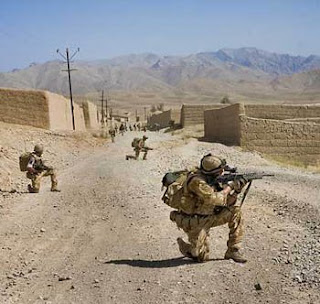 So it is that Matthew Parris – unable to claim that "I was there" – relies on a historical perspective to inform us that, "The Taleban can't win in Afghanistan - but nor can we". History, he writes, "teaches us that British defiance always turns to compromise," and asks, "Why should it be different in Afghanistan?"

In short, the Parris thesis is that, when fighting insurgencies, we have in every case been able to hold our own (or better) militarily. There is no question, therefore, of "can we?" – as he puts it – contain the insurgents. Rather more important, he argues, has been the question "why" [should we], as casualties and costs showed no sign of abating and the ingrained nature of our opponent's position looked harder to alter.

After three or four years of fighting, we start to talk about a "settlement", which we describe as (and genuinely persuade ourselves to be) a progressive and honourable move. We insist, in the immediate, that the military effort must be maintained, but that the battle - a battle for hearts and minds - will not be won by military means. Give-and-take may be necessary. And in the end we withdraw, never saying (even to ourselves) that we are retreating, and wish everyone well.

This is the culmination of a process, writes Parris where, eventually, the "why?" overtakes the "can we?". In so doing. he effectively articulates the theme often expressed on this blog – that there are three "wars", the shooting war, the economic war and the "home front". We may win the shooting war, but the costs and the steady trickle of casualties rob us of our will to continue.

This brings us nicely to Thomas Harding, who perhaps is arguing on a different plane, but believes that we can defeat this insurgency. At the moment though, he asserts that "British troops [are] shooting themselves in the foot... Outdated tactics and severe equipment shortages are our worst enemies in Afghanistan, not the Taliban."

Conveying the fears of the soldiers he has so recently spoken to, Harding tells us they fear the "war of our generation" is turning into a slog. It will suck in more troops, who will require increasing logistical support, which will in turn give the enemy – which is reverting to classic guerrilla warfare "ambush" tactics - many more targets.

The problem now, according to the "some of the brightest military thinkers" on the spot, is that the British Army has not adapted its own doctrines and regulations to deal with the changing situation - which Harding sketches out in some little detail:

…the British might enter a district for a few weeks, but when they leave, the Taliban return, meting out brutal punishment to anyone who has co-operated with the foreigners. And the amount of force needed to take these towns and overwhelm the Taliban makes our own troops less nimble, thereby absorbing manpower, supplies and precious helicopter hours.

"The problem," says one officer, "is that we are focusing on protective mobility. We are definitely going down the road the Russians went in the Eighties, with over-reliance on massive armoured vehicles."

Thus, we hear that "the debate is starting on the ground". Soldiers are frustrated that they can march their hearts out all day to track the enemy, only to be blown up by a mine. They query how a lumbering convoy of 100 armoured vehicles can ever surprise an enemy who knows every rock and cave in his own back yard. The time has come, suggest some, to fight the way the enemy fights – but smarter.

Here, to our delight, we actually read references to the Rhodesian insurgency, where:

… tiny units called fire forces, working in groups of four or eight, would drop into enemy territory by parachute or helicopter, unheard and unseen. With the aid of local trackers, they remained concealed for days, watching the enemy's movements and waiting patiently for the optimum time to strike. Again and again the guerrillas were horrified as their safety cordon unravelled, with colleagues falling dead around them.

It is to this very experience to which we have drawn attention on this blog, several times, most recently in October, when we also provided a link to graphic accounts of some of the operations. That same month, Ann Winterton raised precisely these tactics in a Commons debate, her words apparently disregarded. Now, nearly eight months later, we hear that "some of the brightest military thinkers" are taking up the very things we have been talking and writing about for some considerable time.

By contrast with the highly mobile Rhodesian forces, writes Harding, our strategy is static and predictable, our patrols and manoeuvres carried out in full view of the enemy.

Interestingly, the lack of flexibility is in part attributed to, "… the same risk-averse culture that enveloped our campaign in Basra, where the highest priority, to which everything else was subordinated, was avoiding British deaths." And, adds Harding, for some soldiers, the excuses about excessive danger wear thin. "At times," one told him wearily, "I am waiting for someone to mention the Health and Safety Executive." 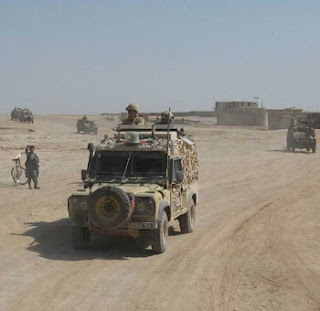 Well they might, for - as The Daily Telegraph has just discovered (we wrote about it in April) – some families of troops killed in Snatch Land Rovers are planning to sue the MoD … under health and safety law.

That apart, Harding reports that, "the single greatest symbol of what is going wrong with our campaign is the lack of helicopters." Lives are being lost needlessly because there are not enough. The MoD knows that what we have is not enough, and has done for years. But the bean counters have never listened. "If the Government really cared about troops, they would pull their fingers out and get the resources out here," says one soldier.

With that theme ringing in our ears, we come to the Sunday piece written by Patrick Mercer. This only needs a passing reference, for he simply echoes Harding's soldiers in calling for more helicopters, and also wants more armoured vehicles,

As to tactics, Mercer thinks it is "worth looking at the solutions that we used to counter the IRA". In order to stop vehicles being attacked by IRA mines, he writes, "we simply banned movement by road ensuring that every operation mounted on the Irish border was done either on foot, with helicopters or a combination of the two."

That brings us to Simon Jenkins, who focuses on tactics, telling us to, "Stop killing the Taleban." They, writes Jenkins, offer the best hope of beating Al-Qaeda:

The Taliban's chief objective is not world domination but a share of power in Afghanistan. While they cannot defeat western troops, they can defeat Nato's war aim by continuing to build on their marriage of convenience with Al-Qaeda, which supplies them with a devastating arsenal of suicide bombers.

What is sure is that Al-Qaeda, as a (grossly overrated) "threat to the West", will not be suppressed without Taliban cooperation. This means reversing a policy that naively equates "defeating" the Taliban with "winning" the war on terror. Fighting in Afghanistan is as senseless as trying to suppress the poppy crop. It just costs lives and money.

While it is implausible for the West to withdraw from Kabul at present, the attempt to establish military control over provincial Afghanistan is merely jeopardising the war aim. Security within the country now depends on fashioning the patchwork of alliances sought, however corruptly, by Karzai. It means dealing with reality, not trying to change it with guns and bombs.

It therefore makes sense to withdraw soldiers from the provinces and forget "nation-building" in the hope that Karzai can exert some leverage over local commanders to separate the Taliban from the Al-Qaeda cells in Pakistan.

So, there we have four separate and distinct contributions. What to make of them? We'll look at that in Part II.