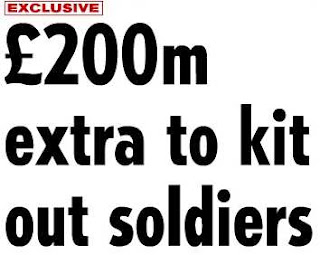 If The Sun has got it right – and it looks like it might – the MoD has managed to extract some more money out of the Treasury. And, if that is the case, the £200 million which the paper headlined yesterday – to be allocated over two years - will be genuinely "new" money, and not simply a recycled announcement.

The rest of the paper's story need not detain us. Just about all of it is either wrong, or self-serving – although the claim that it is an "exclusive" has some merit – it was the first paper to break the "£200 million" news.

The Financial Times, however, has the substantive story, and had it first. Its line is that Gordon Brown has agreed to let the MoD "free up hundreds of millions of pounds" by breaking one of its main accounting rules.

These are somewhat arcane changes, but of great importance which will have an immediate practical implications. Firstly, the ministry will be allowed to move some funds between the three years of the Comprehensive Spending Review. Secondly, it can use money allocated for annual capital spending for resource spending.

This "freedom", says the FT will allow officials more easily to delay, cancel or reconfigure commitments – giving the MoD a much needed flexibility which hitherto has been denied to it. But – and it is a huge, 24-carat, diamond-studded "but" – there are strings attached. In return the MoD has been "forced" to order a no-holds-barred "examination" of the defence equipment programme.

This – note the terminology – is not a "review", much less a strategic review, but an "examination". Furthermore, it will be a "short and sharp" process. Crucially, the aim is to "prioritise frontline needs and squeeze savings from industry".

In other words, in the ongoing internal battle in the defence establishment between the "future war" advocates and the "current operations" supporters, the latter have taken a significant step forward.

This is very much in line with what Ann Winterton asked of Des Browne earlier this month, when she did not get an answer. Now, it looks as if she has.

In this context, it looks as if the (relatively) small amount of new money on offer is – to use that indelicate word - a "bribe" which, together with the leverage afforded by the new budgetary flexibility, has pushed the military to focus more on winning the battles in Iraq and Afghanistan rather than investing in still more shiny new toys.

Needless to say, the "non-review" will be expected to deliver results, the FT telling us that the Treasury is insisting the MoD use the process to address the estimated £2 billion budget shortfall.

That means that some of the treasured "big-ticket" defence contracts are due for the chop. Amongst this slated for the treatment is the "Future Lynx" programme, as well as orders for more Astute submarines and Type 45 destroyers - and the tranche 3 Eurofighter, if the "colleagues" will play ball on cancellation costs.

What is then expected is that, and surplus generated, over and above that needed to clear the budget deficit, will be used to "rebalance" the procurement portfolio, giving it very a different shape. The clue here comes from an MoD spokesman, who says the ministry is determined to prioritise spending plans "to do more to support our people here and on the frontline".

One survivor, however, looks to be the carrier programme. This is effectively confirmed in a second piece in the Financial Times which asserts that the contract – although not publicly announced – was approved last Wednesday. The formal announcement is expected in the next ten days.

It says something of the FT though that they do not seem to understand the full significance of their own story, its heading declaring: Defence review looks to shorter term”. Interestingly, it could not keep up the legend on the "examination" so the "non-review" gets its real title.

The agenda is most certainly there, the paper telling us in this second article that:

Driving the move is a recognition within the department that it "needs to take stock" and reprioritise. It has to move away from purchasing equipment for the long term – equipment that could already be out of date by the time it comes into service – and concentrate on supporting its troops in the near to medium term.

Historically, the MoD has planned its equipment procurement programme over 10 to 20 years but the continued strain on Britain's troops from the wars in Iraq and Afghanistan has focused ministerial minds on more immediate needs.

The MoD is then cited in more detail, saying:

But, as you might expect, the paper concentrates on the implications for defence contractors, the body text reverting to describing the word "examination", suggesting that it "will raise fears among executives that they may face further delays and cuts to big procurement schemes".

For industry, the FT says, the potential impact cannot be underestimated. Defence sources insist that overall, the MoD will not be spending any less on equipment. It will simply be spending it differently. Instead of buying more Eurofighters, a programme that was first begun more than 20 years ago, for example, it may decide to spend its money buying more armoured vehicles. 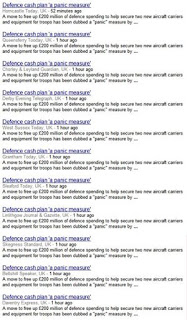 Despite this, we can expect some ritual squawking from the lobbyists, the former defence chiefs – where there is a difference – and, possibly, the Conservative Party. The announcement of the carrier programme, however, will do much to mute the protests and, given the lacklustre coverage of serious defence issues by the media, there should be little that is politically damaging.

Strangely, though, despite the depth of the FT story, it gets very little coverage elsewhere. The Daily Telegraph does a "cut and paste" job, synthesising the main points of the FT and The Sun stories, without adding anything.

For political reaction, we get an Associated Press report which gets the central details wrong, claiming a "move to free up £200 million of defence spending to help secure two new aircraft carriers and equipment for troops".

This is then dubbed a "panic" measure by shadow defence secretary Dr Liam Fox. He is cited as saying: "This announcement is not driven by any rational examination of military equipment needs but by the gaping hole in the Treasury left by Gordon Brown's economic mismanagement." He adds:

Long term planning has been abandoned in a panic attempt to plug the gaping hole in the defence budget. This effectively signals the end of the Defence Industrial Strategy and will add further uncertainty to the defence industry at a time when unemployment is already rising.

This, of course, is moonshine. Having closely read the runes for a prolonged period, the one thing that is self-evident is that yesterday's announcement is the result of months of finely-drawn negotiation and that the outcome is one which has been carefully and deliberately crafted.

Fox's response, therefore, leads one to the inevitable conclusion that, either he does not have the first idea of what is going on, or he is making political mischief – or both. No one, with any political acumen, who understood the dynamics behind what has been announced could even begin to think in terms of "panic", and nor would it be advantageous – other than in the very short-term – to project that idea.

As a measure of the fundamental superficiality of the media, however, the AP report has proliferated like a virus and has been copied out in (at last count) some ninety media outlets, the wording in each identical (see illustration). Repetition, though, does not make it accurate but, as long as so much of the media has not even spotted the fact that fundamental changes are afoot, the MoD will not even have to resort to the classic denial: "Ceci n'est pas une revue".