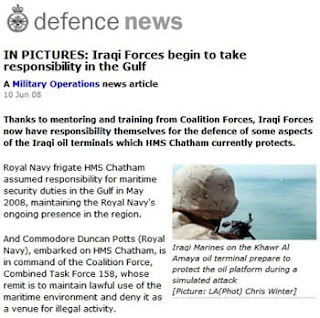 We learn from The Daily Telegraph that British troops in Afghanistan "are angry that the hard fighting they are doing is not fully appreciated by the public." "We are doing our part out here defeating terrorism so it does no come back to our shores," they say, "but while American troops are welcomed home as heroes, their own sacrifices often go unacknowledged."

The troops have every right to be angry, yet this is hardly the first time we have heard this lament. But, never fear! Work, we are told, is now under way across Whitehall to improve the efforts to "sell" the conflict to the British people. "If you have nearly 8,000 people in Afghanistan, fighting and sometimes dying, you have a responsibility to do more to explain why they are there and what they are doing," a Government source said.

Indeed you do have a responsibility, Mr Government source. But what is taking you so long to live up to that responsibility? The lamentable activities of the MoD PR machine – not least the wholly inadequate website - have long been catalogued on this blog, there has been a debate in the House of Commons, endless discussion has taken place and a top level admission of failure. So far though, we have had precious little to show for all the activity.

For a long time, we have asserted that there are three parallel wars being fought in the Afghanistan and Iraq campaigns. There is the shooting war, the economic war and the war on the home front, of which PR is an essential component. We have to take the military's word for it that the shooting war is being won but, on current evidence, the wars on the economic and home fronts are being lost.

Part of the reason for this, we believe, is the total inability to recognise the importance of the "other wars". There is a failure to understand that fighting and winning these "wars" is not an optional extra. It is an integral part of the war effort. This means that decisions are taken without any of the necessary urgency. There has been no shortage of ideas and advice given, but there has been little visible action.

What we really need is a Churchillian "action this day" directive, to cut through the reams of red tape and factional bickering that hampers MoD efforts. Work "under way" is not good enough. At this rate, none of us are going to live long enough to see the end result.