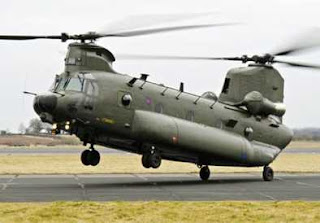 The media are in full flow today, condemning the scandal of the eight RAF Chinooks "lying idle in hangars in the Wiltshire countryside", when they are so urgently needed in Afghanistan.

This has previously been described as "one of the most incompetent procurements of all time" - which indeed it is. But the issue has been rehearsed many times, not least in 2005 when the details first became public, and more recently.

What brings it again to the fore is a report by the National Audit Office (NAO) published yesterday, which disclosed that work ordered by the MoD to make the aircraft capable of flying combat missions had taken the overall cost of the project to £422 million "and rising".

In the media reports, though, there is more than a little element of mischief. Much of the media take 2001 as their timescale, when, as The Times puts it, "eight Chinook Mk3s, [were] bought from Boeing in 2001". It thus puts the "cock-up" – as it has been described by Edward Leigh, chairman of the Commons Public Accounts Committee - firmly in the bailiwick of the current administration.

Leigh may well have contributed to this impression, as he is cited in the Daily Telegraph, saying: "The Ministry of Defence's programme to make airworthy the eight Chinook Mk3 helicopters which it acquired in 2001 for special operations work has been a gold standard cock-up."

However, the 2001 date refers only to the date when the machines were delivered to the MoD (they were actually delivered between July 2001 and May 2002) but the saga dates back to 1995. It was then that the MoD ordered 14 Chinook Mk2a helicopters from Boeing. Six were retained as Mk2a - and have flown satisfactorily – while eight were scheduled for conversion to a Mk3 standard, specially adapted for special forces uses.

In fact, the decision to upgrade the machines was made in July 1995, with a then forecast in-service date of November 1998. The work proceeded apace, but with some slippage so that, in March 1998 - after the Labour government had won the election in 1997 - the in-service date was redefined and set for January 2002.

This means that the crucial decisions which led to the current debacle stem firmly from the Conservative administration. Moreover, the decisions were made just at the time of a reshuffle when Malcolm Rifkind was replaced as secretary of state for defence by Michael Portillo – possibly the worst time for major decisions to be made. Mr Portillo, it will be recalled, later went on to make the decision to procure the troubled Nimrod MR4A.

And, when Mr Leigh's committee looked at this issue in 2005, it observed that, "The Department had considerable experience of identifying lessons from procuring equipment but failed to learn from this experience when acquiring the Chinook Mk3."

The point to emerge from this is that the media is picking at old wounds. The actual focus of the current NAO report is the refit being undertaken to make the aircraft operational. Here, the costs have risen by 70 percent from £53 million to £90 million – bad enough but small cheese compared with the overall losses of the project.

In terms, this is relatively minor issue and, in fact, does not compare with the overspend on projects such as the Nimrod or the Type 45 destroyers. It makes the headlines only because the overall losses are so high but, in being framed they way they are, the stories do not do justice to what is a complex and long-running issue.

With the original decisions having been on the Conservatives' watch, though, this brings home the anomalies in defence procurement, where the timespan of contracts so often carry over to different administrations. What one government orders may have to be paid for by another, of a different colour, while errors in the process come back to haunt successive administrations, even though they may have had little (or no) control over events which led to them.

This is something Edward Leigh, a Conservative MP, should perhaps reflect upon. He may enjoy the temporary discomfort of the government but, in the fullness of time, a new Conservative government may find itself being lambasted for decisions over which it too had no control.