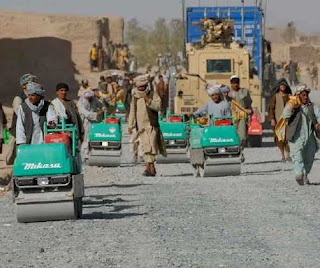 Developing the themes discussed in preceding parts, we have come to the conclusion that the key role of the military should not be defined in terms of "fighting the war" but "fighting the peace". There should be no artificial (or any) division between classic warfighting and associated activities (such as patrolling) and development (and/or "reconstruction"). In dealing with the Afghan insurgency, the two are indivisible parts of the same strategy.

In fact, we go further. Development activities should be the military priority – the only priority - driving all the activities in theatre – but particularly that directed at facilitating or promoting economic activity.

The first of those priorities, we asserted, should be road-building – for the well-founded strategic, political and economic reasons set out by David Kitchen. Crucially, in the economic context, roads allow produce to be pulled into the marketplace, as opposed to production incentives and support, which push product into a system that cannot cope with it, creating price distortions which, all too often, perpetuate the poverty and dependency which the aid system is supposed to overcome.

The effect of good communications and market access is demonstrated vividly by a Foreign and Commonwealth Office report, addressing the failure of the opium eradication programme in Helmand where, despite massive expenditure and local incentives, poppy production had increased.

In so doing, the report notes that the district of Lashkar Gah in northern Helmand – serving the provincial capital where there happens to be situated a large British Army base – was free from opium poppy cultivation. Instead, the district enjoyed some of the most diverse cropping patterns in the region, with extensive cultivation of high value crops such as water melon, tomato, cucumber and onion.

Later in the report, it then goes on to note, in respect of the more northern areas of Afghanistan:

In the districts nearest the provincial centre, Baghlan and Pul e Khumri, high-value vegetable production has the potential to generate higher returns than opium poppy cultivation. There, the asphalt road has brought access to markets in Kabul and Mazar, stimulating vegetable production. 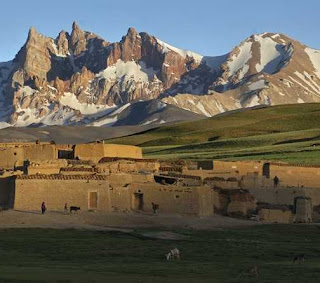 The effect of poor communications is amply illustrated by the fate of the Hazaras - recounted by the National Geographic. They are the inhabitants of Hazarajat - an isolated region in Afghanistan's central highlands to the east and north of Kabul – and despite accounting for up to one-fifth of Afghanistan's population, promises by the government and international donors to pave the roads from Kabul to Bamian and Bamian to Yakawlang have not been kept.

Most of the roads in the region are still glorified mule tracks and, even in the best of weather, farmers cannot get crops to market. Cited by National Geographic is Chris Eaton, CEO of the Aga Khan Foundation's Afghanistan office, who says: "We tried taking melons and peaches to Kabul, and it was juice by the time we got there."

The case for more and better roads, therefore, is unassailable, yet the progress of the road-building programme is and has been disappointingly slow – as evidenced by the experience of the Hazaras. In part, this is due to shortage of financing, but only in part. Some of that problem is more a reflection of the way aid is allocated. For instance, some £130 million has been allocated to (ineffective) opium eradication programmes. That same amount of money directed at road-building could hardly have less effect in terms of reducing poppy production and would leave something tangible to show for the expenditure.

In the FCO report, there is additional intelligence offered, to the effect that, in areas where alternative cultivation thrives, "vegetable traders are mimicking many of the advantages of the opium trade." They are offering cash advances to farmers and purchasing crops at the farm gate, thus absorbing transportation and transaction costs. This suggests that, where a market and good communications exist, traders themselves can secure their own sources of supply, without the intervention of aid or other agencies.

On terms of the road-building programme though, much of the delay – certainly in areas under Taleban control, or where insurgency activity is recorded – is attributed to lack of security. Therein lies the central problem to which we have alluded. The civilian aid and reconstruction programme cannot operate in insecure areas, while the military is too busy rushing off to fight its own war and does not have the resource to provide security for all the development activities. 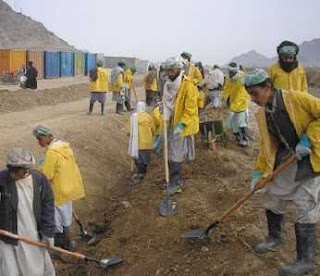 It is this that makes the case for "self defending" military reconstruction programme – as with the US combat engineers who can undertake civil engineering programmes such as road-building, while being able to take on the insurgents should the need arise. Alternatively, there is perhaps a role for "security consultants" to provide protection, although these can be extremely expensive and, on occasions, unreliable.

Nevertheless, provision of the entire resource from within the Army – which would be expected to be the lead Service – would also be costly and could hardly relieve the "overstretch" about which we hear voluble complaints – although other coalition forces allocate substantial resources to construction tasks. However, the military effort is augmented by units of the ANA, which are both trained and "mentored" by coalition forces.

The Afghan formations include combat engineers trained by the Canadians and the United States. And there are also examples of the military setting up and controlling projects, using locally recruited labour (see page 19).

Sensibly devised, a change of strategic direction should not impose an excessive burden and the feelgood factor of military contributions to engineering works is of significant value (see page 7 and 12).

Moving on, there is an issue allied to any road-building programme, also rehearsed in the FCO report. This retails how a bus in Helmand was stopped by "bandits" and passengers were relieved of their cash, watches and mobiles. Workers have been shot at in a location when they failed to stop at a police check post to pay "tax" and, in other cases, mobility has been restricted by Taleban incursions and general "insecurity".

Even where there is no Taleban activity, the police forces themselves can be a considerable problem. The incidence of checkpoints and the imposition of "taxes" on cars and trucks by the Afghan National Police is a common complaint. It is reported that there have been as many as 40 checkpoints between Herat and Kandahar city, each charging trucks up to $10 for safe passage.

Where needed, therefore – at least in the interim, until the police issue can be resolved - is a system of convoys with armed military escorts for commercial vehicle collecting from farms, backed by the sophisticated resources of the military, such as UAVs and reconnaissance aircraft.

Ostensibly, the bulk of the escorts could be provided by the ANA, supervised or "assisted" by coalition force mentors who will attend, in effect, to ensure that the escorts themselves do not double as "tax" collectors or bandits, or collude with those who have nefarious intentions.

In terms of implications for military equipment, one could expect some of these convoys to become targets, open to direct attacks, mines, IEDs and even suicide bombers. This places a high premium on the availability of mine resistant and ambush protected (MRAP) vehicles. It also demands dedicated route clearance teams to minimise danger to road-bound traffic.

Equally, convoy duties have implications for the military formations employed. Typically, infantry are used for this role, which imposes a considerable burden on already stretched units, but it also represents a misuse of this specialist resource. In US practice, it is not uncommon to employ dedicated units of military police, who are specifically trained and equipped for convoy escort duties, thereby relieving pressure on infantry units.

So far, then, we have identified to specific roles for the military, related directly to economic reconstruction. To look for further roles, we must go upstream in the agricultural marketing chain to see where intervention can confer added value.

Here, there is good evidence that there is a serious shortage of suitable bulk storage – especially for wheat but there is also a need for cold stores for vegetables and fruit. In terms of wheat marketing, this is apparent in the substantial seasonal fluctuations in the price of grain, with prices at their lowest around harvest time, when supplies are plentiful, and higher towards the end of winter and in the spring before the new crops are harvested. 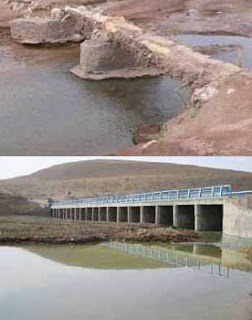 So acute is this shortage in some districts in Helmand, that grain is exported to neighbouring Pakistan – where government subsidised storage is available – only to be returned later in the season, attracting a premium price which is borne by the consumer without conferring any benefits to the original producers.

Clearly, a network of storage centres – linked, of course, to a good road system – is an urgent priority. That much is well recognised by aid and government agencies, who are well aware of the need. The provision of such storage is a key objective of the multi-agency Rebuilding Agricultural Markets in Afghanistan Program (RAMP), which is already devoting much resource to increasing capacity.

Once again, though, an important obstacle is lack of security. The Taleban is well aware of the economic significance of such centres and could be expected – as indeed they have – to interfere with attempts to build such facilities and, when they are built, they become prime targets.

Given the vital economic role these facilities play (which can also house government crop laboratories, advisory centres, plus seed processing and storage units) that creating the security environment needed for their establishment, preventing interference while they are being constructed, and then providing ongoing security, must be high on the list of military priorities.

That said, it also must be recognised that a huge amount has been done already, some of which is recorded here and, for example, here (see also pic, above left - a rebuilt bridge). Nothing of that progress is allowed for in the analyses of Parris and Jenkins, with which we started this post. Viewed through their pessimistic lenses, the impression is of loss, trauma and despair.

Thus, in some respects – as always – the higher priority is promoting more and better publicity about what is being achieved, confronting the naysayers who would have us quit before the job has been done. Nevertheless, one does not get the sense that just the three issues discussed in this part are British military priorities – and there are more we would wish to put on the table. However, in the next part, we have to interrupt this exploration, to look at once again at the wider issues.