The grim magic of numbers 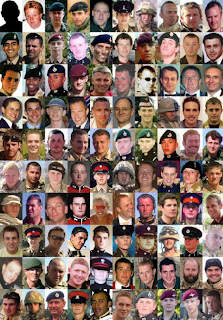 It was inevitable that the sad event of the 100th soldier to be killed in Afghanistan should trigger a torrent of coverage from the media, much of it derivative from newspapers which, in the normal run of things, express very little interest in the campaign in Afghanistan – and even less in southern Iraq.

This blog too expresses its regrets but it would be presumptive of us to offer condolences to the relatives and loved ones – to people we do not know and who do not know us – where we hold no formal position and represent no one but ourselves.

That is best left to the Ministers, the senior officers of the Services and others in high positions, who have uttered the necessary words – which we entirely endorse.

Nor are we going to indulge in the same sort of recriminations or introspection that is the stock-in-place of many journalists and commentators, ready at a moment's notice to deliver the requisite yardage of extruded verbal material to fill the spaces or occupy to airtime necessary to mark what has been called "this grim milestone".

Instead, we simply reiterate our position that we support the wars in Afghanistan and Iraq and believe they are necessary. Our objectives in this context are twofold: to contribute – as far as we can – to the better prosecution of those wars and, at the same time, to pressure (and influence) those who are in a position to take actions which will lead directly or indirectly to a reduction in the number of deaths and injuries arising from this unpleasant but necessary activity.

If that is also presumptuous – or arrogant – so be it. We set out our stall in this piece and stand by it. At least, in our self-appointed task, we are making an effort, taking an interest in the welfare of our troops and pushing for their success.

Misguided we may be in some of our comments, ignorant we so often are but, also, in our estimation, had the powers-that-be taken note of some of our posts, we would not now be lamenting the death of the 100th soldier. Furthermore – and take this any way you wish – we believe that, but for our intervention, we would have been lamenting the 100th death that bit earlier than we have.

Given that we are clearly in for the long haul in Afghanistan, it is a matter of inevitably that, should the tempo of operations continue, we will in due course be seeing headlines marking the death of the next hundred soldiers. If there is anything we can do to make that event as distant as possible, we will do it. If we achieve nothing, at least we will have tried.