A question of prestige 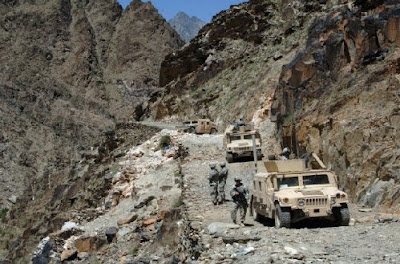 Anybody who thinks that the dearth of hard news on British activity in Afghanistan is an accident knows nothing of the ways of the MoD. As we have already indicated, there is a quite deliberate policy emanating from Whitehall aimed at obscuring the strategic position.

The clamp-down on information very much mirrors that which was imposed in Iraq, and for many of the same reasons. Not least, we have the euro-elections coming up and, after those, the general election. Mr Brown's Labour Party does not want the Afghani War to be an election issue – it is a certain vote-loser. Thus, the less said about the way the war is being prosecuted the better.

The deafening silence, however, has at least been picked up by Booker in his column today, building on the work of this blog.

Thus Booker is able to bring to a wider audience a reminder that one of the best kept secrets of our recent politics, thanks to the news management of the Ministry of Defence, was how our occupation of southern Iraq turned into one of the greatest humiliations in the history of the British Army. But, bringing us up to date, Booker tells us, history is being repeated as the MoD is managing to hide the fact that something remarkably similar is happening in Afghanistan.

The essence of the case is that while, in March 2006, our forces were deployed to take responsibility for the southern province of Helmand, again and again they have taken some town from the Taleban and then been forced to abandon it. Each time, American troops have then had to be called in to retake it, with or without British assistance.

So far, there are three examples. Firstly, in December 2007, the US provided the bulk of the troops and assets needed to retake Musa Qala. Then, in April 2008, the US Marines retook Garmsir, after UK forces had spectacularly failed in their attempt. Finally, this month the Marines retook the town of Now Zad.

Now, although nominally, UK forces still retain the military lead in Helmand, without any formal announcement, it seems that the US forces under General David Petraeus, architect of the famous Iraq "surge", have taken over responsibility for much of the province. Clearly, from the amount of activity, the US is calling the shots and the UK is taking a secondary role.

At one level, it could be argued that this did not matter – and even that it was to be welcomed. With both the costs of the war and the scale of the fighting clearly escalating, US forces taking on a greater burden relieve the Treasury of some of the costs and also reduces our casualties.

The problem, however, is that a reduced presence carries its own costs, in terms of reduced prestige, authority and influence, demoting the UK to the status of an increasingly junior partner in the task of rebuilding Afghanistan, forced to follow the strategic direction set by the Americans, with very little say in the conduct and timing of operations.

In some ways, though, ceding the lead to the US is also to be welcomed, as the British have shown neither strategic competence nor any flair for addressing the complex problem of countering the Afghani insurgency, and neither is the government – with the complicity of the media – prepared to entertain an open debate about the tactics required or even the broad strategy.

In contrast with the steady drone of MoD-inspired "feel good" pieces in the British media, however, we are beginning to see the beginnings of a debate in the US media, one particularly interesting report appearing in Washington Times this week.

This report makes all the right points, specifically the role of road-building, maintenance and security, with the appalling state of one road illustrated in the piece (shown above).

These are issues we know that Gen Petraeus has taken to heart, while the British seem only reluctantly to be following in his wake, too little as always and too late. Thus, if there is any chance of the coalition ever breaking free of Afghanistan, leaving a stable nation behind them, it rests more with the Americans, to which extent the less "leadership" we get from the British the better.

That said, the penalty arising from our reduced prestige – while not immediately measurable – is bound to have an effect. Despite attempts to pretend otherwise, the reputation of the British military took a severe drubbing over Iraq, and a similar failure in Afghanistan reinforces the reality that Britain is drifting inexorably to the status of a third-rate power of very little consequence.

Yet, it is our reputation for being able to "punch above our weight" that has given us our status in the world, with which has come diplomatic and trading opportunities which have undoubtedly translated into real wealth. Britain the third-rate power is likely to have a much harder time of it.

Even though the British public and the media may be entirely indifferent to this prospect, there is also another element. The underlying understanding behind our deployment in Afghanistan is that British forces would, to a very great extent, be autonomous – not merely auxiliaries to the US military.

If, as appears to be the case, that is the current status of our forces, they are in Afghanistan under false pretences. That, incidentally, is also likely to be one of the reasons why the government is so reluctant to tell us the truth. One suspects though that the most important and profound reason for the silence is the reason that governments are always silent – to conceal their own incompetence.

That this current government is incompetent in Afghanistan, as elsewhere, should hardly come as a shock but, as elsewhere, it should not be allowed to conceal that incompetence under a veil of silence. If the government is selling us out, yet still having to bear the burden of the enormous cost of the war, the only reward being dead and injured soldiers and a progressive loss of prestige, this is something about which we should be told.