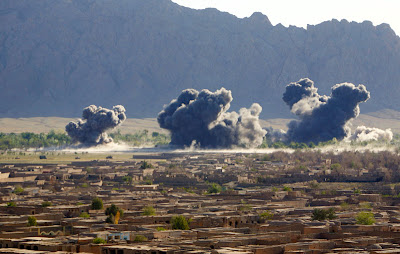 What was once solely a British area of responsibility is no longer. In March 2006 British troops deployed to Helmand province in southern Afghanistan, with a view to imposing stability and bringing reconstruction.

Not only have they failed, the situation has become so tenuous that, increasingly, US troops are taking over, fighting for towns and territories that we have failed to capture or have lost.

Starting in December 2007, the US provided the bulk of the troops and most of the air assets to re-take Musa Qala. In April 2008, US Marines then re-took the town of Garmsir and now, having been effectively abandoned by the British in 2007, this month US Marines re-took the district town of Now Zad.

However, it says something of the paucity of information coming out of Afghanistan that the recent history of this small town is shrouded in obscurity, if not mystery.

Situated some 45 miles north of Gereshk and just under 40 miles due west of Kajaki, it was first occupied by British soldiers in June 2006, in response to a call for help from the governor of Now Zad. B Company, 3 Para, were flown out to the town. On arrival they found it calm but went ahead and helped shore up defences.

This had not been the first activity in the area. On 4 June, A Coy, 3 Para went on a mission codenamed Operation Mutay to a secure a suspected Taleban compound, close to Now Zad. They were supported by Patrols Coy, 3 Para, a platoon of Gurkhas and local police.

A Coy were airlifted close to the target compounds by 2 RAF Chinooks, which came under heavy fire. A protracted fire fight ensued as A Coy fought their way into the compounds and then repelled counterattacks by determined Taliban forces. In addition to air support from AAC Apaches, US A-10s were also called in. Having secured and searched the compound, A Coy withdrew, fighting running battles with the Taleban, until they were eventually airlifted away.

The Paras in Now Zad were relieved by platoon from D Company of 2 Gurkha Rifles and then a Company from the Royal Regiment of Fusiliers. From June to November 2006, in what was the longest defence of a static trench position in British Army history, the soldiers were holed up in the police compound in the centre of the town and, on occasion, came perilously close to being overrun.

In the course of just one month, July, the Gurkhas repulsed over two dozen attempts to overrun the compound, firing more than 30,000 rifle rounds and 17,000 machine-gun rounds. They killed an estimated 100 of their attackers, without losing a single man on their own side.

The Fusiliers then took over on 30 July, spending 107 days under attack before being relieved by 42 Commando Royal Marines in November 2006. The Marines then had as their mission "to provide stability for the local people during a period of ever decreasing security," something – through no fault of theirs – they singularly failed to do.

One of their number, Marine Richard Watson, was killed on 12 December 2006 as elements from his detachment were patrolling to the north of Now Zad. They came under attack from Taliban forces and Watson was hit by small arms fire and fatally wounded. The Commandos were replaced the spring of 2007 by 1st Battalion the Royal Anglian Regiment. They also lost a soldier, Pte Chris Gray, killed during a close-quarters firefight.

By July 2007, however – and possibly before - Now Zad seems to have been abandoned by the British, its population having deserted the town. It had, alongside Musa Qala, become occupied by the Taleban. We next hear of it again in December 2007, when US troops were engaged in a firefight in the outskirts during the operation to recover Musa Qala.

Then, on 15 June 2008, US Marines assigned to Foxtrot Company, 2nd Battalion, 7th Marine Regiment mounted an attack on Taleban strongholds in Now Zad and, by the end of July seemed to have established a foothold.

Nothing much more was heard until September 2008 when the town was briefly mentioned after Royal Marines and US Marines of Foxtrot Company, 2nd Battalion, 7th Marine Regiment were photographed sweeping the streets for improvised explosive devices.

By February 2009, however, the town was defined as a USMC area of operations and off-limits to journalists. Free-lance journalist David Tate was told by the Marines, "That's not the story we want to push."

Tate described the town as having been abandoned for three years, with the villagers living displaced to nearby village. The town's infrastructure was crumbling and it was a virtual "free fire" zone in the sense that the only people left in it were Taleban. 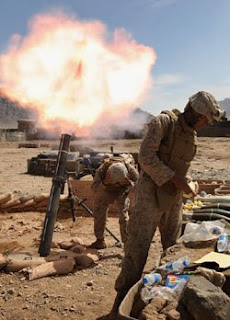 And so we come to 3 April this year, when we were told (yesterday) that a Special Purpose Marine Air Ground Task Force conducted a major combat operation against insurgent forces in Now Zad.

The Marines targeted positively identified enemy positions from which insurgent attacks had originated over the past several months. Other locations were identified with intelligence, surveillance and reconnaissance assets.

The two major components involved in the operation were a ground force and an aerial assault. Enemy targets were destroyed by combined fires from rocket artillery, aircraft, mortars and ground troops. "The mission took some enemy forces out of the fight and showed them how much force we have with us and what we can use against them," said Cpl Andrew C Conte, a squad leader with the ground assault element. "It really cleared out some of the areas we were having troubles in."

The ground scheme employed Company L as the main effort by conducting a raid on a known enemy position. Other Marines held blocking positions to ensure insurgent reinforcements were denied freedom of movement and the opportunity to engage the Marine forces.

Navy F/A-18C Hornet fighter-attack aircraft, an Air Force B-1B Lancer bomber, Marine AH-1W Super Cobra attack helicopters, the Army's tactical missile system and Btry. D, 2/14's high mobility artillery rocket system set conditions for the operation by employing precision munitions on key insurgent targets. "Once the bombs started dropping there wasn't too much movement," said Conte. "With all the ground forces out there and everything we had overhead, it was calm because we knew nothing was going to touch us."

"We were able to engage some enemy targets before they engaged us," said Cpl Taylor E. Vogel, a forward observer with the 81 mm mortar platoon. "We were able to drop mortars on [enemy] fire teams that were moving in on [Marine] units. We definitely achieved what we wanted to. We destroyed the big targets that have been occupied by enemy forces."

Leading up to the operation, the Marines had "proactively conducted combat operations" in Now Zad's District centre daily in order to shape the battlefield by moving insurgents into disposable positions. Marines took precautions by using leaflet drops and radio broadcasts in the area to warn the population in nearby villages of the danger, which helped reduce collateral damage.

"Throughout the winter in Afghanistan, you hear about the [insurgent] spring offensive," said Conte. "We caught them before they caught us in the spring offensive, and we set the tone of it with showing how much [firepower] we have and what we can use."

Insurgents attempted to counter the Marines' strike with IEDs, mortars, small-arms fire and two rockets, with no success. Instead, the Marines positively identified and pursued their targets. "The operation was a tremendous success on all levels," said Buonocore. "The confirmed battle damage assessment is pretty significant. There were no civilian casualties, and nothing was hit that wasn't a target."

The Americans are to be congratulated for this "tremendous success", but it does show up our inability to step up to the plate and solve the problems we undertook to deal with. However, this is a coalition operation, and there is no shame in accepting the help of the better equipped and more numerous US forces.

What is disturbing though is the silence of the British media and, indeed, of our own MoD. Full of praise for the welcome, if modest achievements of British troops, it is grudging to the point of churlish about acknowledging the achievements of our allies.

If we can't hack it on our own, the very least we can do is express our appreciation to the Americans who – even if they are acting in their own interests – are doing the fighting (and sometimes the dying) which would otherwise fall to our troops.

An alliance is an alliance – we are not alone. We should behave accordingly.