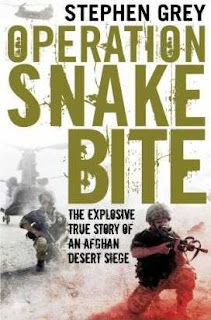 Having in December 2007 followed the Musa Qala operation as best we could at the time, it is of more than usual interest that a book has been published, offering the first detailed account of what went on.

This is Operation Snakebite written by Sunday Times journalist Stephen Grey, described as "the explosive true story of an Afghan desert siege".

For those who enjoy the "war book" genre, this is a stonking good read. It is finely crafted, with a well-structured narrative and a good mixture of characterisation, description and fact to keep the reader turning the pages to the very end. It also provides a valuable historical account of an at times horrifying story – as the blurb puts it – "of a war which has gone largely unnoticed back home."

The reason it has gone "largely unnoticed", of course, is that the MoD not only avoided telling anyone about it, but put a security block on the official publication of details, which left the MoD website devoid of information, with journalists contacting the Taleban on their mobile telephones to get details of the operation.

Courtesy of Grey, we now know that there were several reasons for the MoD's reticence, one being the coincidental visit of Gordon Brown to Camp Bastion. With the largest operation then to have been mounted in Helmand Province and with the outcome far from certain, officials were concerned that news of the operation might detract from the prime minister's visit, especially if there were casualties.

But the major reason, Grey tells us, was that both the British and the Americans had decided that this was to be an I/O – an "information operation" – otherwise known as a propaganda exercise. The intention was to convey to the outside world that this was an operation led by the Afghanis, assisted by coalition forces. 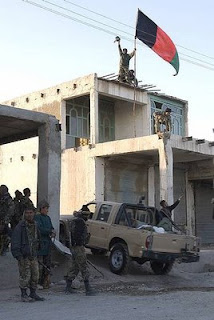 As a result, we had the bizarre scene of the "capture" of the town centre being photographed by the MoD's Defence Combat Camera Team, showing jubilant Afghani troops raising their national flag. British and US forces who had fought their way into the town, after periods of intense combat, were forced to hide their vehicles and keep out of sight for the fiction to be perpetrated.

The fighting by the coalition forces, the lead up to the operation and the political background, are well-described by Grey, leaving the reader under no illusions that this major operation was almost entirely a coalition effort, made possible by the injection of massive US forces, including elements of the US 82nd Airborne Division, which paved the way for the assault with a daring, if risky, helicopter assault.

Behind this operation are the political machinations, both Afghani and military, which lends a conspiratorial overtone to the book, lifting it above the ordinary "war book", giving it more depth than would be expected from this genre.

With a highly informative account of the history of Helmand to open the book, this makes this a rounded narrative, which culminates in a short analytical chapter which tries to set the operation in the broader context of the counter-insurgency operation in Afghanistan.

Of special interest is Grey's detail of the number of mine strikes suffered by British forces, one of which he witnessed, giving a moving and personal edge to the account, which benefited from his presence as an embedded reporter and his personal knowledge and friendships with some of his subjects. He also notes that the King's Royal Hussars were equipped with Mastiffs, with the squadron taking fourteen IED hits, suffering no serious injuries – although does not link the two issues.

There is also a graphic and detailed account of the intervention of USAF AC-130H Spectres in the final stages of the assault on Musa Qala, a role which Grey describes as "decisive", confirming the utility of these airborne gunships as a battle-winning weapon - something of which British procurement officials should take note.

Despite its vibrancy as a book however and an amount of technical detail, Grey is obviously at the limit of his knowledge when it comes to Army equipment. At one point, he describes a Sultan APC as a "light tank" and an Afghani Army truck as a "Bedford" when it is an International 7400 truck. These and other minor points suggest that Grey is more of a "people" man and lacks a wider understanding of military issues.

That, to an extent, is also reflected in his analysis, which tends to be superficial and derivative. He perhaps over-reliant on the opinions of those he interviews – of which there are an impressive number, in excess of 200. Despite his access to top-ranking military officials, though, he makes very little use of them - and we thus do not see enough of Grey's own thoughts in terms of evaluating their responses.

This is not necessarily a weakness if your expectations are of a well-written historical narrative, in which Grey the journalist excels, aided by superb maps, illustrations and photographs. One important omission though is an index, which limits the utility of the book to serious students of the Afghani campaign.

That notwithstanding, for what it is, it is a valuable and important addition to the growing library of works beginning to emerge from the campaign and is an essential read for anyone who seeks a better understanding of what is indeed "a war which has gone largely unnoticed back home."