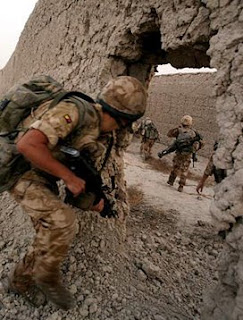 One of the complexities of the counter-insurgency campaign in Afghanistan is the variegated nature of the enemy. Although we are used to the portmanteau term "Taleban", military sources speak of "tier 1", "tier 2" and so on, to describe the various levels of commitment.

On top of that, there are the tribal factions, the drug lords, foreign fighters and the rest, all making for a bewildering kaleidoscope of opponents that confuses the strategic picture no end.

So it is with the real enemy in Whitehall – the MoD. Seen by outsiders as a monolithic entity, its warring tribes boast exactly the same kaleidoscopic variety as the armed insurgents on the plains and hills of Afghanistan, with their own agendas, loyalties and alliances.

Some clue as to where any particular faction stands at any one time can be gained from their ambassadors, the individual defence correspondents for the media. Most – but not all – of them have allied themselves with one or other factions, acting as unofficial spokesmen for their respective groups.

Such a clue comes from The Times, with Michael Evans reporting under the headline, "Military loses battle over Afghanistan troop boost", retailing how: "Gordon Brown has rejected the advice of both his Defence Secretary and military chiefs by refusing to send 2,000 more troops to Afghanistan to boost the permanent British presence in Helmand province to more than 10,000."

The use of the word "battle" is highly revealing, as it indicates the reality of that invisible war being waged in Whitehall, and in the messes, clubs, offices and boardrooms of the defence contractors (many of them employing former defence chiefs), all of them pushing their own agendas, leaking to their particular media allies when they do not get their way.

Hence it is highly revealing that the piece does come from Michael Evans, a loyal supporter of one of the military wings of the MoD, who tells the story from the perspective of his "clients", in terms of pleas from commanders for more "boots on the ground" having been rejected by the prime minister, who has "sided with the Treasury and has ruled that the total force must remain at the present level of 8,300."

The inferences you are invited to make are transparently obvious – the brave, sturdy soldiers are once again being balked by a cash-strapped Gordon Brown who, conspiring with his the "bean counters" in the Treasury, are depriving "Our Boys" of the resources deemed essential to win the war against Johnny Taleban.

As we have already pointed out on the forum, however, things really are not as simple as that. Things never are that simple.

The military, as currently constituted, is a deeply dysfunctional organisation, not least evidenced by its state of denial over its performance in Iraq. It is also one which – as CDS Jock Stirrup admitted in January - was "smug and complacent" about prosecuting counter-insurgency warfare, relying too much on its experiences in Northern Ireland – the lessons of which it did not even apply properly.

It is also a military which, as Stirrup also admitted, has yet to complete a "fundamental reappraisal" of Britain's counter-insurgency training and structures and which, as we have seen recently, seems unable to foster a "spirit of informed debate" when it comes to reviewing its own performance.

Furthermore, despite some reputed high-fliers and intellectual heavyweights in the middle ranks, this is a military that has been unable to come up with a coherent strategy for the prosecution of the counter-insurgency in Afghanistan, is (still) making a complete mess of its equipment procurement and is unable to mesh with US doctrines.

On top of that, it has shown itself to have been comprehensively caught out in its dealings with the Taleban, and despite its operational budget having increased from £1.5bn in 2007-08 to £2.6bn in 2008-09, it has been unable to demonstrate any proportionate increase in effectiveness.

On the other side of the road from the MoD, however, the situation is seen somewhat differently. While Evans avers that Gordon Brown has had a "change of mind, under Treasury pressure" about sending more troops, as long as the military could not come up with a credible strategy, encompassing the effective use of additional troops, there was never going to be any permanent uplift in numbers.

We are told that John Hutton, the defence secretary, put his full weight behind the military chiefs' recommendation to send long-term reinforcements, but this is not surprising. There was always a fear that Hutton would "go native" and be captured by the MoD – and this has proved to be the case. Rather than a controller or director of the military caucus, he has become an apologist for it.

Evans also tries to imply that the US will be discommoded but his choice of phrasing is, once again, revealing. "The decision will also bitterly disappoint the Americans," he writes, "who had been led to believe that a mini-surge of British troops was due to be announced." In other words, this is a speculative assertion.

In fact, while no one disputes the undoubted bravery and elan of the British military, and their competence at executing rehearsed tactical drills, at political and higher military level in the US, there is indifference to their intentions. After the debacle in Iraq and the "deal" at Musa Qala (and elsewhere) there is no longer any trust in the strategic judgement of the British military – and nor are their ill-equipped and ponderous formations of any great value.

While the "Toms" churn up the desert in their "boy racer" Jackals, the US Command have long since decided that their own troops will do the "heavy lifting", while continuing to supply much of the heli-lift, close air support and intel assets. British help to fill in the gaps and deal with the natives is appreciated but no longer essential.

For General Sir Richard Dannatt, though, Evans has it that this "will be a bitter blow". But it is he that has presided over the diminished reputation of the Army of which he is so proud. He needs to look to his own lack of strategic leadership, and his failures to grasp the nettle of turning the Army into an effective counter-insurgency force.

As for the Army generally (and the military as a whole to a lesser extent), it needs to come to terms with quite how much its reputation has been diminished and how much goodwill it has lost – and is losing through the inept handing of the "information war" which is so much part of any counter-insurgency campaign.

The worst is, the longer and deeper the military remains in its current state of denial, blaming anyone and any thing but itself for its own shortcomings, the worse it will get. Already, the MoD publicity effort is a parody of itself. The way it is going, the rest of the military will follow, to become a tarnished asset and a shadow of its former glory.