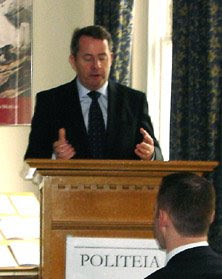 Although the hurly-burly of daily political events dominate the media, as each day passes and the general election comes nearer – with a very good chance that we will see a Conservative administration elected – the views of the various Tory shadow spokespersons become increasingly important.

Thus when on Tuesday last, Liam Fox, our current shadow secretary of state for defence, gave the 2009 "Spring Address" to the Politeia think-tank, it was of some importance. This was also something of a coup for what is one of the lesser known think-tanks, and one for which it should be congratulated.

For Dr Fox, the occasion was an opportunity to set the agenda, with a good platform and a chance to speak on a subject of his choosing, with no interruptions and an attentive audience. And, according to the "label on the tin", Fox chose to address "the problems which politicians must confront when in office",

He thus "singled out the intellectual and cultural trends which often pervade and shape political action," stating that: "even relatively trivial trends can shape law and policy, though they may be contrary to the wishes of the electorate." Then, we are told, Fox put these views in the context of his own portfolio, considering "how such trends currently shape the defence and security policy of the UK and how they can be changed."

It is not a bad theme, although not one I would have chosen or have wished to have heard but, to give it its due, Tory Boy Blog made the best of it and gave a fair summary.

Aspects of the speech were also reported by The Daily Telegraph and The Daily Mail, these two picking up on a specific point – that the "culture of celebrity" in the UK was one of the several forces "weakening Britain's fortitude".

The general thrust, however, was better summed up by the Tory Boy Blog, which headlined the speech as telling us that "A Britain obsessed with celebrity, indifferent to serious learning and unsure of its values and history risks being unable to defend itself.

Within that context, Fox isolates three "threats" which he believes particularly need addressing, against which we must defend ourselves. One is a resurgent Russia, spending over $200 billion in the next five years upgrading its forces. The next is the world's greatest exporter of terrorism - Iran - which is inching ever closer to becoming a nuclear power. And the third is the ideology of the Islamic fundamentalist, which continues to be spread across the globe.

You can take a view of the importance of these threats. For instance, you could argue that about the threat of Russia $200 billion over five years is actually a relatively small amount of money – less, for instance, than our annual defence budget. Given the very low base from which the Russian military starts, it would not be difficult to maintain that it is vastly overstated.

What might be a little churlish to point out though, is that while the three issues identified may or may not be credible threats, we are a nation at war, fighting (and possibly losing) a vicious counter-insurgency in Afghanistan, a conflict in which Pakistan plays a considerable part.

Strangely though there is absolutely no mention of either country in Fox's speech, even though the prospect of losing in Afghanistan might be considered (or not) to be of some significance. One might also think that this posed something of a threat to the UK – not least in terms of its effect on our standing in the world and our relations with the United States.

One might also expect some mention of the not inconsiderable threat represented by the ambitions of the EU in terms of defence integration, and its steady, insidious subversion of Nato, the latter being the bedrock of our defence strategy. Nevertheless, such considerations evade Dr Fox. And so, it seems, does China.

If one can live with those omissions, however, the measure of the speech should be most fairly judged on how well the author fulfils his own promise, bearing in that he offered not only an analysis of the problems confronting a Conservative defence secretary but also a prescription of "how they can be changed."

Taking Fox at his own valuation, we see that he tells us that, "Immersing ourselves as a society in celebrity headlines and trivia and pretending the dangers don't exist would be irresponsible." That is fine, as far as it goes, even if one might raise that little quibble about whether the key threats have been identified.

Then we get the injunction that, "Politicians need to be frank with themselves and with the public about the risks we face." That too is fine, a rounding declaration of "motherhood and apple pie". And then … Fox offers us the view that:

Both politicians and the media need to get away from the bad habit of saying what people want to hear and tell people what they need to hear because they are going to have to confront the inevitable. As a society we have to find the resilience to deal with the challenges of our generation as previous generations dealt with theirs.

This brings us to his finale, on a subject of his choice, where Fox had complete discretion as to what he said. And so we get:

We can begin by understanding who we are and what brought us to where we are before we lose our hard won gains. To shape the world or be shaped by it? That, indeed, is our question.

So, if we look at the "label on the tin", which did promise us an analysis of "how such trends currently shape the defence and security policy of the UK and how they can be changed," we have to ask ourselves whether the promise was delivered.

Looking at what we have been told, it seems that our aspirant defence secretary is telling us that we need to understand "who we are and what brought us to where we are before we lose our hard won gains." Then we must, it seems, ask ourselves whether we wish "to shape the world or be shaped by it".

Once more, one can take a view as to whether Fox's analysis is worthwhile, but we can also suggest that, in terms of telling us how "trends currently shape the defence and security policy of the UK" and how things "can be changed", Dr Fox seems a little light on detail.

Thus, since Fox is in a questioning mood, perhaps we can offer our own question. Would it be untoward, we could ask, to expect from a shadow defence secretary just a little more detail as to how he would manage his portfolio when or if he came to assume the office of defence secretary? Or, quite possibly, you may consider that unreasonable.