For the front line … 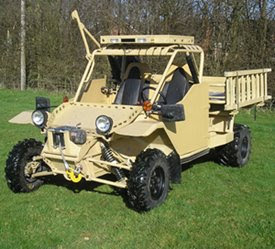 So, we have the latest piece of hardware which those MoD geniuses have devised, proving once again that they are working for the enemy rather than our own forces.

The vehicles are to be produced by Derbyshire-based Enhanced Protection Systems Ltd (EPS) and are called the Springer. And, continuing the long tradition of MoD spin, Dr Andrew Tyler,* Chief Operating Officer for MoD Defence Equipment and Support, proudly tells us:

This new vehicle will enable the delivery of vital equipment to front-line troops. It is designed specifically for rugged, desert conditions - which means it is well-matched to the operational environment in Afghanistan. The Springer dune buggy will be an added capability for troops at Forward Operating Bases in Afghanistan. This contract demonstrates that we're continuing to invest in vehicles for the front line.

The Springer will have a crew of two and the ability to carry a combat load of 1 ton. Its role, we are told, is specifically focused on moving combat supplies from helicopter landing sites into the forward operating bases.

In other words, this vehicle is intended for use at the sharp end, where there is the highest possibility of "contact" with the Taleban and where troops are most at risk.

Interestingly, the details published on the MoD website are also reproduced on a number of technical sites but, on the prestigious Defence Aerospace site, the editor was moved to add this comment:

Given the number of British soldiers that have been killed by improvised explosive devices while riding in unprotected vehicles, the procurement of modified dune buggies to support operations in Afghanistan is more than a little puzzling. The photograph above shows all too clearly the amount of protection available to the vehicle's crew. Indeed, on its face this announcement resembles more a belated April's Fool joke than a responsible ministerial procurement decision.

This is not an unreasonable comment. In June 2007, the Canadians were operating a very similar type of vehicle called the Gator, which was targeted by the Taleban, killing three men, an incident we recorded at the time. As a result, the Canadians banned their use "outside the wire", requiring protected vehicles to be used instead.

But, as we all know, our brilliant MoD knows best, which is why it has chosen this wonderful equipment. And that is why we are winning the war.

* Dr Tyler is a real expert in military vehicles. He was previously DE&S Director General Ships, where he was responsible for putting the Surface Fleet to sea and keeping it there. He was also the MoD Senior Responsible Owner for the Maritime Industrial Strategy, a key part of the overall Defence Industrial Strategy.