A glimmer of sense 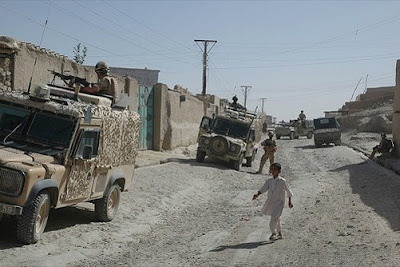 In the absence of any coherent (or any) debate in the media on the important issue of how to tackle the insurgency in Afghanistan, a low-key snippet of news from the BBC is unlikely to have much impact – its significance barely appreciated outside a very small circle of analysts and officials.

That actually is a measure of the poverty of the debate in this country, for what we are being told is the UK is to commit an extra £50 million in development money to Afghanistan. But, more importantly, we find that the money is to pay for a new road in southern Helmand province and refurbishment of a power plant, as well as farming and job creation projects.

This comes from international development secretary Douglas Alexander, who has told the BBC that "tackling poverty was the best way to tackle the insurgency in the country." As such, this is not only the most sensible thing that Alexander has said, but it represents a paradigm shift in strategy in this benighted country, the result of much earnest behind-the-scenes discussion and debate.

Such is the inability of the media to understand what is and is not important, however –and its inability to sort the dross from information of value – that we only get the minimum of detail. Thus we are only told that the aid money has been earmarked for projects including construction of a major road linking the towns of Lashkar Gah and Gereshk (pictured above).

We also find that it will also go towards a hydro-electric plant to boost power supplies to Gereshk and agriculture and rural enterprise projects to create rural jobs.

Much will be written from time to time in the future, about the British military effort in Afghanistan, as if that was the totality of our contribution to fighting the insurgency, but this initiative – if it is implemented effectively – will have a greater long-term contribution to peace than a battalion of troops in their "boy racer" Jackals. Yet, you can bet, if another battalion had been despatched to Afghanistan, it would be all over the news, accompanied no doubt by much acreage of self-important pontification.

Interestingly, we see in The Guardian a piece headed, "Pomegranates not poppies", underlining the vital role of agricultural development in addressing the opium-growing problem in Afghanistan.

One smiles wryly and recalls that we were writing on precisely this point last June when we concluded that, if the trade was developed, it could have a very significant impact on the war.

Noting how there had been some welcome increases in high-value agricultural production, we wrote:

… in the final analysis, it is more of the same that is eventually going to beat the insurgency in Afghanistan. A supermarket buyer, waving a substantial contract, is probably worth more than a thousand troops – and certainly more than 10,000 aid officials.

The roads issue, on the other hand, is one we explored in depth last Sunday. But what the heck. We are only a lowly blog, way down the pecking order and not worthy of any attention from the high and mighty, so what do we know? Nevertheless, the fact is, that of all the dross you will read in the next few days, this little snippet of news from the BBC is of far-reaching importance.

If we are ever to get out of Afghanistan with our reputation intact, leaving behind a country that is moving towards peace and prosperity, then what has just been announced is the way to do it. For this glimmer of sense, we should be grateful.