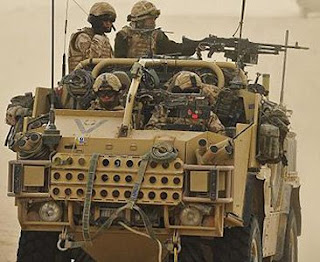 There has been swift media response to the deaths of two British soldiers in Afghanistan, killed in an explosion while patrolling in their Jackal.

Much of it, as always, is "cut and paste" stuff, with the same phrases appearing in different outlets, all with different by-lines and no source attribution – other than an MoD statement. Thus, the multiplicity of stories adds very little to the information contained in any one report.

One writer with enough local knowledge and experience to add informed comment is Con Coughlin and he is quick to add a note in his clog on the incident. Unfortunately, whatever his local knowledge, he lacks any understanding of military equipment, and therefore hares off into ill-informed and valueless speculation.

Referring to the Jackal "hit", he tells us you don't have to be a rocket scientist to work out the link between this and the continuing political chaos in neighbouring Pakistan.

The roadside bomb that killed the two soldiers, he tells us, "was clearly a sophisticated device as it destroyed the Jackal military vehicle they were travelling in, which has been specifically designed to protect soldiers from roadside bomb attacks."

On that basis, Coughlin avers, "in all probability the device will have been imported from across the border in Pakistan, where the Taliban seems to have an endless supply of troops and equipment that can be used to maintain the momentum of the anti-coalition insurgency."

This is what is known as starting from a false premise and then compounding the error. You do not have to be a rocket scientist to work out that the Jackal has not been "specifically designed to protect soldiers from roadside bomb attacks," although you do need a modicum of knowledge about military vehicles – something which, clearly, Coughlin lacks.

On that basis, it is far from clear that a "sophisticated device" would be needed to destroy the vehicle. A couple of stacked anti-tank mines – of which there are millions in Afghanistan – would more than suffice. And, since the Taleban have been known to use up to six stacked mines in their hits, Coughlin's thesis falls flat on its face – as indeed does he.

He like the rest of the baleful hacks have fallen prey to the MoD propaganda that the Jackal is somehow an "armoured vehicle" - a phrase which appears in most of the cut-and-paste jobs – as opposed to a bodged-up truck with bolted-on armour added as an afterthought, in a fruitless attempt to overcome the flaws in a hopelessly inadequate design.

Such is the child-like gullibility of the press corps, however, that none so far are able to look past the artful MoD hype and ask why it is that this supposedly state-of-the art and extremely expensive machine is being destroyed by a bunch of fighters who – in philosophy if nothing else – are not long out of the stone age.

Instead, we see very much a repeat of the legend employed when the Snatch Land Rovers we being hit in Iraq, the MoD/Army putting out the word that British Forces were being attacked by "new and sophisticated bombs" and, therefore, no blame could be attached to the Army for deploying crap equipment. And there, for "Pakistan" read "Iran", another part of the legend for explaining away failure.

Thus it is that the Taleban are able to secure yet another victory – the metrics of success measured not in yards of front line taken, or territory occupied, but by the number of soldiers killed.

And, in dealing with why too many soldiers are being killed unnecessarily, a toll that will eventually lose us the war, the media – Coughlin included – does not have the wit to ask the right questions, or even understand the issues. If a little knowledge is a dangerous thing, Coughlin provides more than adequate testimony to the fact that it has a powerful capacity to mislead.

More intelligently written – admittedly not difficult – is a leader in The Guardian, published before the latest deaths were known.

Headed, "A game of losers", it tells us that a summary of the weekend's events in Afghanistan makes sobering reading. Four US soldiers were killed by a roadside bomb yesterday. A French soldier, another Brit and one as yet unidentified soldier were killed on Saturday. A suicide bomber killed two Afghan civilians and wounded 14 others in an attack against a convoy in the western outskirts of Kabul and the mayor of Kandahar survived a roadside bomb, which killed a passer-by. Additionally, another convoy of trucks was torched outside Peshawar, endangering a vital supply route through Pakistan.

Says the leader, almost every tactic has been tried in the last seven years – and failed. Thus, what, apart from more roadside bombs (and dead and injured soldiers), are we all getting for our money?

What is particularly noteworthy of the piece, however, is the comment about the reconstruction process. There is a bitter irony in this, the paper says:

If you grow opium and bear guns, you attract large amounts of foreign aid. If you don't, they are not interested in you. A huge chance to build roads, provide electricity and agricultural irrigation, the things the Afghans keep on saying that they want, has been missed. And so has been the opportunity to show Afghans that something positive can emerge from the foreign presence.

If the general run of hacks had any brains, they would see the link between this and the useless Jackal. As well as being a botched design, this vehicle is a strategic error, reflecting a flawed approach to fighting the insurgency in Afghanistan.

A country wracked by thirty years of war needs more than anything, repair and redevelopment. The key to that is roads - building, rebuilding and repair – on which everything else depends. With eighty percent of the population rurally based, the primary need is for rural roads linking to the main centres and thence to the international network where maximum value could be gained from the sale of crops. Yet, of the billions in aid pouring into the country, only about ten percent goes into rural development and, of that, only about ten percent went into the road programme.

Much of that money is unspent. It is in the hands of civilian agencies. They require security. With the Army unable to guarantee that, redevelopment in key areas is stalled. The fatal flaw is in separating security from redevelopment, making one dependent on the other. Yet, in the longer term, it is redevelopment which brings peace.

If the civilian agencies cannot work in insecure areas, the Army has to carry out redevelopment, the priority being the road network. Therefore, high-mobility patrol vehicles are not the priority. This should be combat engineers, plant and armoured road-building equipment. Rather than responding to the poor condition of the roads with high-mobility, off-road vehicles, the better option is to build new roads along which military – and civilian – traffic can pass.

Apart from the broad strategic advantages, this has other benefits. One of the most difficult tasks for security forces in fighting guerrillas is to bring them to battle on their terms. Building roads, with the economic and social benefits that accrue from them, presents the Taleban with targets they cannot afford to ignore – small wonder they have expended much energy on disrupting even the pitiful programme that has been undertaken.

With the Army building roads, choosing the times and places, it regains the initiative. This is one of the quintessential requirements for success, one enumerated by Sun Tzu and by other successful generals, from Hannibal and Napoleon to Montgomery.

In indulging its obsession for high-performance off-road vehicles like the Jackal, the Army is equipping itself for a war that it is comfortable with, rather than the war that needs to be fought. The Jackal, together with other "boy racer" kit, indicates that the Army's strategic direction and tactics are wrong.

But hey, as long as there are people like Coughlin in this world, who can apply their enormous knowledge and experience to getting it wrong, the Army need never have any fear that it will be found out. Instead, all it needs to do is keep dolling out the press releases and the hacks will suck happily at the tit, keeping their brains in neutral and our soldiers dying.