Sacred cows to the abattoir 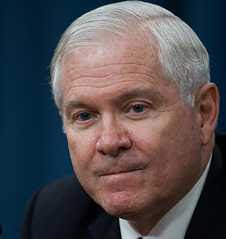 There were quite smiles of satisfaction in some offices in the darker reaches of Whitehall this week – and elsewhere. These were occasioned by an event in the United States which could mark a major turning point in a vicious battle that has been fought for fifteen years or more.

This is the battle for the future shape of our military, one that has barely been recognised outside a very narrow group of specialists. Unremarkably, therefore, it has been almost completely ignored or misunderstood by the media, most MPs and the entire political commentariat.

That, however, does not diminish its importance, with the putative turning point coming with the budget speech by Robert Gates, US Defense Secretary. Although in Washington, the battle over the future shape of the military has been led from across the Atlantic. Therefore, what happens there has a profound impact on British thinking - and actions.

The significance is that Gates has decided to bite the bullet and do the very thing which is needed over here, announcing that he is planning to "reshape the priorities of America's defense establishment." The aim is to "shift resources and institutional weight towards supporting the current wars and other potential irregular campaigns,"

If his proposals are approved by Congress, he says, they will "profoundly reform" how the Department of Defense does business. At the very heart of this is a rebalancing of his department's programmes in order, he says, to "institutionalise and enhance our capabilities to fight the wars we are in today and the scenarios we are most likely to face in the years ahead". He will, however, also provide a "hedge" against other risks and contingencies.

To achieve this, Gates proposes to "reform how and what we buy," which means "a fundamental overhaul of our approach to procurement, acquisition, and contracting." Crucially, he tells us, his department must stop programmes that significantly exceed their budget or which spend limited tax dollars "to buy more capability than the nation needs".

In phrasing that will echo around Whitehall and find its way into British documents, Gates declares that conventional modernisation goals "should be tied to the actual and prospective capabilities of known future adversaries – not by what might be technologically feasible for a potential adversary given unlimited time and resources."

Thus, Gates is taking on the enemy in a full-frontal assault, the same enemy that we face here in the MoD, the "defence bureaucracies" which – here as in the US - "have revealed underlying flaws in the priorities, cultural preferences, and reward structures".

The problem Gates identifies is that the defence establishment is a set of institutions largely arranged to prepare for conflicts against other modern armies, navies, and air forces. Shifting that priority, he wants the department to be more people-centred, focused on programmes which directly support, protect, and care for the man or woman at the front.

In terms of hardware, his number one priority is to increase intelligence, surveillance and reconnaissance (ISR) support for the warfighter, adding $2 billion to the base budget.

This will include fielding 50 Predator-class UAVs, representing a 62 percent increase in capability over the current level and 127 percent from over a year ago, increasing manned ISR capabilities such as the turbo-prop aircraft deployed so successfully as part of "Task Force Odin" in Iraq, and initiating research and development on a number of ISR enhancements and experimental platforms optimised for today's battlefield.

Additionally, he aims to spend $500 million more on increasing the capacity to field and sustain more helicopters. The primary limitation on helicopter capacity, he tells us, is not airframes but shortages of maintenance crews and pilots. So the focus will be on recruiting and training more Army helicopter crews.

Then, "to boost global partnership capacity efforts," Gates plans to increase funding by $500 million, to include training and equipping foreign militaries to undertake counter terrorism and stability operations. He will also "grow" the special operations capabilities, increasing personnel by more than 2,800 or five percent and will buy more special forces-optimised lift, mobility, and refuelling aircraft.

On the broader front, Gates is closing down the F-22 programme and stepping up production of the F-35 Joint Strike Fighter, an interesting choice as this multi-role aircraft has a ground attack and surveillance capability not shared by the F-22 air superiority fighter. A number of other programmes are being cut or cancelled, the latter including the VH-71 presidential helicopter, which is vastly overspent.

"The perennial procurement and contracting cycle – going back many decades – of adding layer upon layer of cost and complexity onto fewer and fewer platforms that take longer and longer to build," says Gates, "must come to an end."

In this context, the really significant news for us is that Gates is planning to ditch plans to procure vehicles for the US Army's Future Combat System (FCS) – the direct equivalent of the FRES "utility" vehicles, on which the outgoing CGS, General Dannatt, had set his heart.

Although Gates intends to retain and accelerate incremental development of the technology enhancements to all combat brigades, he states:

I have concluded that there are significant unanswered questions concerning the FCS vehicle design strategy. I am also concerned that, despite some adjustments, the FCS vehicles – where lower weight, higher fuel efficiency, and greater informational awareness are expected to compensate for less armor – do not adequately reflect the lessons of counterinsurgency and close quarters combat in Iraq and Afghanistan.

This was precisely the conclusion that we had come to in 2004 when we first wrote about the subject. Five years on, and many more millions spent, we finally have a politician who is brave enough to slaughter the military's sacred cow.

Thus, an $87 billion programme bites the dust, made all the more delicious by Gates's noting that the current vehicle programme, developed nine years ago, "does not include a role for our recent $25 billion investment in the MRAP vehicles being used to good effect in today's conflicts." He then adds: "An Army vehicle modernisation program designed to meet the needs of the full spectrum of conflict is essential." And, at $25 versus $87 billion, it is pretty obvious which way the wind is blowing.

Pre-empting criticism – of which there is already plenty - Gates concludes by saying that his "reform budget" reflects the lessons learned in Iraq and Afghanistan – while also addressing the range of other potential threats around the world.

In the coming weeks, he says, we will hear a great deal about threats, and risk and danger – to our country and to our men and women in uniform – associated with different budget choices. He continues:

Some will say I am too focused on the wars we are in and not enough on future threats. The allocation of dollars in this budget definitely belies that claim. But, it is important to remember that every defense dollar spent to over-insure against a remote or diminishing risk – or, in effect, to "run up the score" in a capability where the United States is already dominant – is a dollar not available to take care of our people, reset the force, win the wars we are in, and improve capabilities in areas where we are underinvested and potentially vulnerable. That is a risk I will not take.

Gates could have used another phrase, such as "opportunity cost". While the generals hanker after their toys, men and women die for want of the correct kit, and we lose our wars.

The US Defense Secretary has delivered a mortal blow to the "toy brigade" both across the Atlantic and here. With the US pulling out of FCS, there is no way the FRES fantasy can survive here – and there may be other sacred cows headed for the abattoir.

Gates has also seriously wounded our most deadly enemy, the MoD, with a hope that a change of direction in the United States may now lead to a similar movement here, saving billions of pounds and many lives. There is now an outside chance that our military will get the kit it needs, instead of the toys the generals – and the rest of the defence establishment – want.