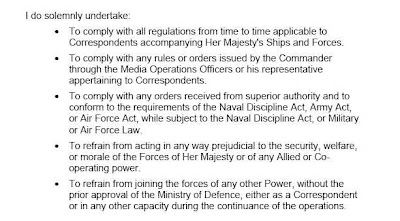 Increasing government control of information – and its control of the agenda – has been almost the defining developments of the New Labour era, characterised by the oft-repeated accusations of "spin" levied at our masters.

But "spin" is only the most visible and obvious part of a huge government machine, which employs a vast range of subtle – and some not so subtle – tools to keep control. All government departments use these tools, from agriculture (DEFRA), through environment to defence and beyond.

Whenever you start probing government activities, you will come across the machine. Mostly though, at the receiving end, you will only see only tiny pieces of the jigsaw – or feel the effects. Most often, when you bump up against the restraints, so subtle are they that very few even recognise them for that they are.

However, while they do indeed affect the whole range of government activities, they are perhaps most visible (or detectable) in the defence establishment – not least because it has a valid reason for keeping some of its activities secret. But this also reflects that, of all the departments, it is one of the best practised and most developed in the art of dissimulation.

Nevertheless, in following the defence agenda – and latterly in writing the book Ministry of Defeat - I have become more aware of some of the techniques used. In what is going to have to be a series of posts, therefore, we thought it might be useful to identify some of them, used – with or without variations - in all departments of state to maintain our "secret society". In this post, we will look at some of the mechanisms for controlling the media.

Taking it from the top, the most obvious way of controlling the flow of information is to say nothing. This is still a standard technique. Even to this day, it is massively effective, to whit the events in the city of al Amarah in Maysan province, Iraq, in May through August 2004.

Throughout that period, there were a series of intense battles going on, amounting to all-out war between the British and the Mahdi Army, yet the massive scale of the conflict went completely unreported at the time – unreported because the MoD simply said nothing about it.

However, the truth – as they say – will always out. With such events, someone will always know something, and there will always be leaks. These cannot be prevented, so they must be contained. And it is here that the machine works at its most effective, with an increasingly subtle range of strategies employed.

The first and most effective tool is outright denial, close-coupled with the age-old device called "lying". Thus, when the fighting did break out in al Amarah, and word began to leak out, the first response of the MoD was simply to deny that there was heavy fighting, dismissing the fragmented reports as "isolated incidents", and downplaying their importance.

Here, choice of words become vital, as part of the overall technique. An attack on a convoy, for instance, becomes described as a "security incident", it is always an "isolated incident" and the duration limited. Thus, whenever the news leaks out – and however bad it was – the then current situation will always be described as being "calm and stable" or in similar terms.

One of the great advantages the MoD and the military have here is the control over access. In the al Amarah affair, with the city being in hostile territory some 200 miles or so north of Basra, journalists were totally reliant on the military for the physical means of getting there. And those journalists who asked to be taken to al Amarah were simply told there were no transport resources, or even more bluntly, simply "no".

For those journalists who persevere, the "big stick" can be used – and it is used. The first is the Official Secrets Act. Information will be classified and the journo will simply be told they cannot publish it or they will be in breach.

More often though – where the OSA cannot really be justified - a system called the "D-advisory" is used, the system which replaces the D-Notice system. journalists (or their editors) are "requested" not to publish certain information. Most editors will abide by this and, even if they do not, they will check out the options and that will often delay publication past the danger period and reduce the impact.

If a journalist still perseveres, the military can then invoke the "green book" which is "produced in consultation with editors and press and broadcasting organisations", where they can be required to "submit their material for security checking and to undertake not to publish any operationally sensitive material". And, of course, all journos are required to sign the declaration illustrated above.

It is here that the MoD has the ultimate sanction, as any breach of this "voluntary" agreement means that the journalist concerned will lose accreditation, whence all facilities are withdrawn. We will discuss this further in later posts, but it is something of a blunt instrument which itself can make a story, as the journalist then has nothing to lose.

More generally, therefore, other more subtle layers of controls come into play. One of these is the "trade", of which there are many variations. The most straightforward is to trade delay for detail. A journo may have only a small part of the story so the deal is that, if publication is held up, a "full" briefing will be given and the journo is then free to publish, on the basis of what they have been told.

Sometimes, this will be further sweetened by a promise of exclusivity, or a head start over the competition, so that the journo can break an "exclusive" days before his rivals.

The trade, however, often extends to content as well as timing. The exclusion of embarrassing rather than operationally sensitive material can be traded for access to high level contacts. Omission of a paragraph about a cock-up, for instance, can be swapped for a juicy "insider" quote from a field commander – or higher – on an exclusive basis.

For a journalist that is prepared to resist such blandishments, however, there are other techniques. One is pre-emptive publishing. Other journos may be given carefully tailored details early, which are withheld from the offender, allowing the rivals to go ahead with a sanitised version of the story, thus spiking the "scoop".

These, though, are only the more obvious controls. There are many more, and we will look at some of those in the next post.