A misallocation of resources 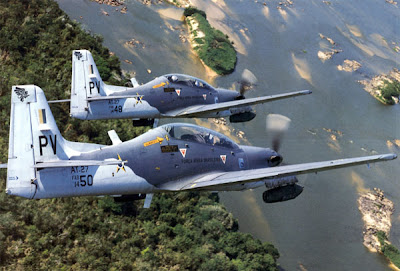 We saw a piece over the weekend informing us that thousands of United States marines are to be deployed alongside British troops in southern Afghanistan within weeks after the "overstretched" British have fought to stalemate with the Taliban.

The fact is that US troops have been bearing the brunt of operations for some time in Helmand, which is now only nominally a British responsibility. But what has not been widely reported is the intensity of air effort deployed in support of British forces and generally, amounting to 60-70 combat sorties a day. Additionally, a significant number of surveillance and reconnaissance missions are being flown, comprising manned and unmanned aircraft.

We get some clues from the current reports (and here) as to the range of strikes, but what we do not get is any clear idea of how and under what circumstances airpower is actually used.

For that, though, we can turn to a remarkable book written by Capt Doug Beattie (with Philip Gomm) called An Ordinary Soldier, published in October last year. This is a detailed account of an attempt in September 2006 to retake the town of Garmsir after it had been over-run by the Taliban. Beattie was in charge of a detachment of six British soldiers, including himself, mentoring a group of Afghan National Police.

They, in concert with the Afghan National Army – also mentored by British soldiers – the total amounting to no more than about 200 men, were up against a ferocious enemy, seeking to do what it eventually took 2,400 US Marines to achieve some 18 months later.

But what comes over from the account is the extremely heavy reliance on airpower. On one day, the attack was supported by no less than nine aircraft, comprising F-18s, a B-1 bomber, Apache attack helicopters and Harriers. Without their intervention, it is quite possible that many coalition lives would have been lost and the gallant Capt Beattie would not have survived to write his excellent book.

What also comes over is how the absence of loiter capability in the support aircraft heavily affects the dynamics of the fighting. With the fast jets, their time over the targets is extremely limited and, because of the rules of engagement, they can only be called in once contact is made with the enemy.

Thus the tempo was set by the coalition forces advancing, making contact with the enemy, calling in air support and waiting for the aircraft to arrive. The pilots were then briefed on their targets by the JTAC (Joint Tactical Air Controller) and delivered their bombs (called "stores"). This was sometimes followed by strafing runs but the outcome was invariably that the enemy fire subsided. However, every time, the enemy regrouped and fighting resumed, whence more strikes were called in, and so on, with monotonous regularity. Thus did the battle proceed, day after day.

Contrasted with the small number of coalition forces actually committed to the battle, one is thus struck by the wholly disproportionate expenditure in manpower in supporting them. Apart from the pilot's time, for every hour flown, an F-18 needs nearly 17 hours routine maintenance. The Harrier is said to require nearly 60. Behind that is the infrastructure to keep the aircraft flying, right down to the cooks, clerks and bottle washers. In all, far more men (and women) were committed to supporting the ground forces than actually took part in the battle.

Furthermore, in terms of effect, the aircraft were most often being called in to target small packets of men – what might be called low-value targets – with sometimes 2,000lb bombs being delivered. Not only is this "overkill", causing massive collateral damage, the expense of the guided munitions is enormous.

On the other hand, in one episode – day five of the attack – Beattie resorted to using a 51mm mortar, in this case with devastating results, killing four men with one bomb. The effect was equal to or greater than some of the observed effects from the air strikes. 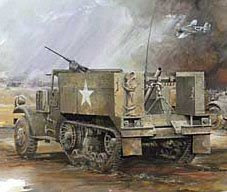 This was achieved with the lightest of the mortars in the British Army inventory. Heavier 81mm versions are also available. Able to fire 15 x 9lb bombs per minute with stunning accuracy, these are formidable weapons.

One cannot avoid speculating, therefore, whether the availability of one or more 81mm mortars – especially if they had been mounted on a mobile platform such as the FV432 APC – could have achieved exactly the same results as the airpower, but in a more timely and certainly more economic fashion, using considerably less manpower overall. Moreover, this technology is hardly new, with the Allies in WWII (and the Germans) using similar combinations - see picture.

However, with indirect fire, as in using mortars, targets are engaged which are out of direct line of sight – that being one of the advantages of the weapon. Thus, for accurate target designation and damage assessment, air spotting is highly advantageous.

Addressing this issue, coincidentally, I am also re-reading a book on the 1944 battle for Normandy and the contrast is striking. There, the air cover was continuous and reaction immediate, to the point where daytime movement in the German Army became impossible. When there were no strike aircraft immediately in the sky, there were always spotter aircraft aloft – usually Austers - ready to call in artillery or mortar strikes.

For continuous air cover, the current generation of fast jets is entirely unsuitable and we are back to the argument about the use of Tucanos (pictured above) or similar prop-jets, which can loiter for four hours or more over the battlefield. Able also to deliver their own ordnance, a very small number of these aircraft could provide a continuous overview of the battle, providing real-time intelligence, artillery spotting and air strikes.

And not only do they cost considerably less than the fast jets, the maintenance requirement is two man hours per hour flown. The case is powerfully argued here, with an estimate that replacing a high-end capability squadron of F-16s with cheaper turbo-props could save a half billion dollars per Air Expeditionary Force (AEF) rotation.

The experiences of Capt Beattie and his men, however, do not only suggest a more sanguine look at battlefield support. They also raise questions as to their basic equipment. His team of six men were fighting from two Wimiks and there is no question that their .50 cal machine guns and their GPMGs were powerful additions to the armoury. But there is also no question that their platforms – the unarmoured Land Rovers – were being used for exactly the role where previously armoured cars would have been used.

The tactical situation cried out either for such vehicles, or light tanks, which could have manoeuvred under fire when, instead, Beattie and his men were forced to take cover. After some incredibly near misses, it is only luck that they were not all killed.

Despite Beattie's heroism – he was later awarded the Military Cross – the action was only partially successful, the coalition forces maintaining a tenuous hold on the district centre and an eastern checkpoint, suffering daily attacks which continued well into 2007, before the town was fully secured by the USMC in 2008.

Arguably, had the intervention been more decisive earlier, preventing the Taliban building up its strength, the large number of troops which eventually had to be fielded would not have been necessary.

Thus, while we see the ritual complaints of "overstretch" in the current report, with the handmaiden complaint of "under-resourced", it is germane to ask whether indeed either complaint is valid. In purely financial terms, there is no shortage of resource being pumped into the fight against the Taleban, and the overall number of men and women deployed easily outmatch the enemy.

What we are seeing, therefore, may be more a question of a misallocation of resources – the concentration on high-tech equipment which is soaking up funds and manpower when more boots on the ground with better, but still basic equipment might achieve decisive results.

This makes the recent speech by Robert Gates all the more appropriate. But we are also reminded of a piece we wrote in March 2007 when we cited Ed E. Heinemann, designer of the B-26 Invader, the A-1 SkyRaider and the A-4 SkyHawk,

He declared: "The obstacles to any simplification may seem insurmountable, and the reasons for more complexity are many and powerful. But if we permit this Frankenstein of complexity to continue to work at its current plodding, insidious rate, it will slowly overwhelm us to impotency."

We were there, impotent, in September 2006. Currently – with 60-70 sorties a day being flown - nothing much seems to have changed.