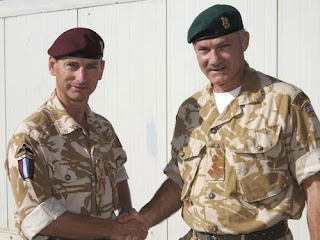 In Helmand province, readers will recall, we are told by the Operations Officer for 3 Commando Brigade (Major):

Currently we have secured the five major population centres in Helmand and the Provincial Reconstruction Teams have exploited this security to deliver tangible, effective and sustainable reconstruction and development. During our tour, you could count the number of security incidents in these areas on the fingers of your hands.

The record shows that 3 Commando Brigade took over in Helmand from 16 Air Assault Brigade on 8 October 2008 and completed its 6-month tour on Friday, 10 April 2009, when it handed over to 19 Light Brigade.

Having already dealt with the Major's assertions in relation to Now Zad, we return to his extraordinary claim about the number of "security incidents", with a look at one of the five major population centres in Helmand, Lashkah Gah. This just happens to be the provincial capital and the location of the headquarters of British forces in Helmand.

With 3 Commando Brigade having taken up residence on 8 October, we find from the official record that, on 11 October 2008, at approximately 7:30 pm, "International Security Assistance Force forces took action to interdict a combined attack planned by enemy forces against an Afghan national security force compound in Lashkar Gah."

We are informed that insurgents were seen gathering on the outskirts of the town, prior to launching a mortar attack. Afghani and ISAF forces sought to counter this attack, supported by an air strike in which multiple enemy forces were killed.

Brig-Gen Richard Blanchette, ISAF spokesman, then stated: "If the insurgents planned a spectacular attack prior to the winter, this was a spectacular failure."

Task Force Helmand spokesman Royal Marine Lt-Col. Woody Page said, "This was a deliberate and planned operation that continues, conducted by ISAF and ANSF forces to defeat terrorist activities in the region of Lashkar Gah. We remain fully committed to supporting the government and people of Afghanistan in their aim to defeat these terrorists."

The Times was then to observe on 13 October that the attack on Lashkar Gah had been the first time that the Taleban had attempted to push inside the well-defended provincial capital. The operation had indeed been an attempted "spectacular", a Taleban tactic culled from the insurgents in Iraq and aimed as much at psychological impact as military success.

On 14 October, we then hear from the New York Times that ISAF and Afghani forces had repulsed a fresh Taleban attack the day before, killing at least 18 insurgents.

A Nato spokesmen said the attack, "the second in four days on that city, underscored the growing abilities of the Taliban, who have increased the tempo of their attacks as the seventh anniversary of their ouster from power in Kabul approaches."

Interestingly, Nato officials also say that the two attacks at Lashkar Gah showed how the Taliban had grown into a far more formidable force than in the early years of the conflict. "They now have an ability," we are told, "to mass fighters in large groups, sometimes in the hundreds, with an array of small and heavy weapons, and they can co-ordinate attacks more effectively, often involving simultaneous thrusts from different directions."

That day, there is also more air activity, again with coalition aircraft performing shows of force and, the next day we hear from the Boston Globe that a US National Guard soldier has been killed by an IED after his military convoy was attacked near Lashkar Gah.

By 16 October , there is still air activity, with a coalition aircraft dropping a GBU-12 onto enemy fighters firing upon friendly forces with small arms fire, "in the vicinity of Lashkar Gah" and, on 17 October, The Guardian reports: "Insurgents kept up their assault Thursday on Lashkar Gah. They fired a rocket that landed on a street lined with shops, killing a civilian and wounding five others."

The attack, says the paper, followed two other assaults this week on the security checkpoints that ring the city. More than 80 militants were killed and three police were wounded. The attacks on the city, the capital of the world's largest opium producing region, appears to signal the Taliban's intention to disrupt a major government centre.

On 18 October 18, we get indirect news from the Pakistani Daily Times that fighting is continuing and on 20 October we are told that a US Air Force MQ-9A Reaper dropped a GBU-12 onto insurgents who were using small arms fire and rocket propelled grenades against coalition forces. A US Air Force B-1B Lancer dropped GBU-38s in the same area.

It is then only on 21 October, after what has effectively been ten days of continuous fighting, that the Afghan National Army declares victory in defending Lashkar Gah from "an attempted Taliban takeover".

Not until 4 November, however, do we learn from the Canadian press of the scale of the fighting and how close the battle had been.

Viewed from the Canadian perspective, from this source, we learn that a small group of Canadian soldiers had "finally returned to their base in Afghanistan after playing key roles in some of the heaviest fighting this fall."

Details, the narrative went, are now starting to emerge about the part about 30 Canadians played in the battle for Lashkar Gah. "(The fighting) was quite intense," said Maj. Steve Nolan, who commanded one of the mentorship teams working with a kandak, or battalion, of Afghan National Army soldiers.

Hundreds of Taleban fighters were involved, attacking the city on three sides. Nolan's team and their kandak, normally based in Kandahar province, were mobilised and arrived in the embattled city on 13 October as insurgents were attacking police outposts around the city. "We pulled into Lashkar Gah in the dark and it turned into a combat mission right away," said Nolan. "As we were moving in, there was tracer fire moving over our convoy."

On 17 October, the Canadian-mentored kandak was ordered to clear a swath of territory five kilometres wide and 10 kilometres long into the nearby village of Aynak - a maze of eight-metre deep canals, three-metre high cornfields, vineyards and narrow lanes lined by tall mud walls. "There is no more complex terrain anywhere in the world," Nolan said.

Backed up by attack helicopters, the Canadian and Afghan soldiers advanced into repeated ambushes, coming under machine-gun and rocket-propelled grenade fire. Shots would be exchanged, then the Taliban would fall back to their next position. "It's an all-day affair. There was always fire, or you always knew (every) 50 metres, that's where the next little contact would be."

After sweeping the corridor into Aynak free of Taliban, the kandak and the Canadians took part in a massive assault involving more than 1,400 Afghans, as well as mentor teams from Britain and the US. That assault, on 21 October, cleared a similar corridor into another nearby village called Nawa. On 22 October, Gen Zazai declared the Taleban had been successfully driven back from Lashkar Gah.

Although barely reported in the British media at the time, The Daily Telegraph later observed that, "British commanders were surprised that the Taliban had managed to gather such a large force for a single attack."

On 26 October, though, The Times had been on the case, reporting that US military chiefs are to send up to 9,000 troops to Helmand next year, potentially sidelining the UK’s 5,000-strong force in the southern Afghanistan province.

The move, wrote defence correspondent Mick Smith, "comes amid US frustration that the British have insufficient soldiers and helicopters to maintain security and reconstruct Helmand, with the Taliban acting freely in large tracts of the province." British sources said the revelation that the bulk of the troops were to be sent to Helmand made it doubtful the British could stay in charge.

The failure of the British effort in Helmand, Smith added, "was highlighted two weeks ago when Taliban fighters marched on the provincial capital of Lashkar Gah and attacked the governor's house just yards from the UK base." The base is actually over a mile away, but the point was made. Even in a supposedly secure area, the British had failed to keep out the Taleban.

All this notwithstanding, given that, only two weeks into its deployment, 3 Commando Brigade had spent ten days fighting continuously in its own headquarters town, one can only assume that our Operations Officer for 3 Commando Brigade (Major) took this to be just one security incident. Either that or, as we suspect, he was on a different planet – or in a different country.

That could indeed be the case because, even after 22 October, with over five month to run, there were many, many more incidents. We will have a look at some of these in another post.