Taking us for mugs 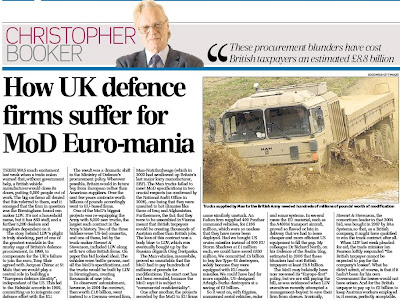 In his column today, Booker today picks up on the MAN truck story, but also extends it to take in the broader issues of the undeclared Europe first policy that has blighted defence procurement over the last decade.

Some time ago, I calculated that the British government had overspent to the tune of £8.8 billion on European projects, when the same (or sufficient) capacity could have been acquired more cheaply through indigenous production or by buying from other sources.

That is not to say that we should not buy European equipment. For instance, if a case could really have been made for a medium-weight, wheeled armoured vehicle (although I do not think it has) then we could have – and perhaps should have - bought the French VBCI. These, in any case, had a substantial British component, and they could have been in service by 2011.

The point that emerges, therefore, is that the decisions on which military equipment to buy should be made on the basis of national interest and then, within that, on the basis of what best meets the military requirement. All things being equal, the equipment should be purchased from British manufacturers. But, if better can be obtained elsewhere (or faster where there is an urgent operational need) then we should go anywhere in the world. 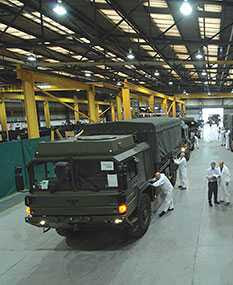 What Booker points out in his column though, as indeed did we earlier, is that one of the largest Army contracts in recent time, for a new fleet of 8,000 Army trucks, was not decided on any of these criteria but in support of Mr Blair's policy of supporting European military integration. Even Gerald Howarth, at the time noted that the MoD was "Buying them for political rather than commercial reasons". That is wrong, wrong, wrong. Army equipment should not be used as a political tool.

With a deep recession now in progress, the way this contract was awarded is particularly poignant, given the travails of one of the earlier bidders, LDV. The firm is now facing closure when it could have been sharing in a programme originally costed at £1.6 billion and which will end up at around £2 billion by the time all the add-ons have been taken into account.

The appalling thing about this whole episode and many others like it, though, is how little political and media interest there has been in the whole saga. We get no end of accusations directed at the government about "underspending", but rarely is there any interest in looking at where the money goes and whether it could be spent better. The whole of the undeclared "Europe first" programme has been one of those "black holes" which no one mentions.

Of course, with so many billions being sluiced about to bail out the banks and sundry financial institutions, it is very easy to lose sight of the fact that this is real money, representing real jobs and real products, the end result being military capabilities that determine whether people live or die.

The biggest problem of all, though, is that when it comes to protecting our own national interest, seem to let our "partners" walk all over us. The background to the MAN trucks story is that it took over the British company ERF, one of the last truck-makers in the UK, hollowed it out from the inside and then made it a front company for retailing German and Austrian-built trucks in the UK. 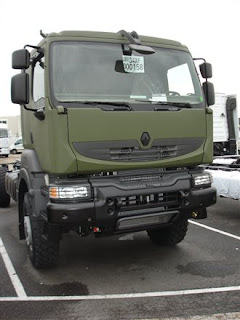 The one thing you can bet though, is the French Army – supposedly a pillar of the European Union – will not be seen in anything other than French-built trucks (pictured). In the same way, while we see French and German ambulances on our streets, you will be very hard put to find anything but a French-built ambulance anywhere in France.

It is exactly this mentality which is currently exercising the "colleagues" this week as they attend an emergency European Council today in Brussels. They are addressing the rush to "economic protectionism" and, in particular, Sarkozy's robust support for French car manufacturers and his determination to support French jobs before anything else.

In the frame are Sarkozy's plans to lend PSA Peugeot Citroen and Renault €3 billion each and other measures in exchange for a promise not to shut French plants or move to cheaper sites "in the Czech Republic or elsewhere".

The French see no inconsistency between being member of the EU and supporting their own industries, yet we seem to look upon our membership as an excuse to ditch anything British, run down our industries and buy from any Jacques, Fritz or Toni that happens to want to make a quick buck at our expense. I suppose that we should be consoled in this case that British truckers at least got the contract to transport the trucks from Austria to the UK (below). 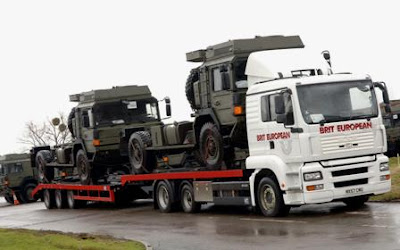 However, when it comes to truck builders, as Booker observes, when LDV last week pleaded for Government aid, the trade minister Ian Pearson loftily responded "the British taxpayer cannot be expected to pay for the company's losses". What he didn't admit, of course, is that if it hadn't been for his own Government those losses would never have arisen. And for the British taxpayer to pay up to £2 billion to keep Austrian workers employed is, it seems, perfectly acceptable.

Our government is taking us for mugs. It really is about time it woke up and smelt the coffee. British national interest comes first – and that does mean British jobs for British workers and British trucks for the British Army. Look after your own first not least because, unless you do, you won't be in a position to help anyone else.