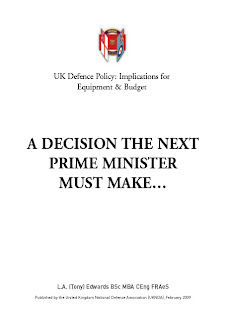 The British military faces transfer to the "second division" unless there is a "major spending increase". That is the message conveyed by a report produced by the UK National Defence Association UKNDA). Its author, Tony Edwards, a former head of defence export services at the Ministry of Defence, thus argues that Britain must increase its defence spending by £15 billion a year, representing a 40 percent increase in the defence budget.

That much we are told by The Daily Telegraph which gives the report front page treatment. To obtain the full details, however, one would have thought that the obvious place to go would be the UKNDA site and download the report itself.

Oddly, unless there are secret signs that are not visible to mere mortals, this does not prove possible. A link to the Telegraph story is available, and a somewhat less than informative press release can be read. There is no obvious sign of the report. But, not to be deterred, a Google search yields dividends, and a link can be found – on the Society of British Aerospace Contractors' website.

Not to put too fine a point on it, it does seem rather rum that the only way one can access a so-called "independent" report, calling for a very substantial increase in the defence budget, is to go to the website of an organisation which represents companies which would be the major beneficiaries of that increased expenditure.

Having looked at the report – a rather modest production of 24 pages including several large and rather odd photographs – perhaps the kindest thing one can say is that it is a blessing that Tony Edwards no longer works for the MoD. One could also surmise that one of the reasons why the MoD is currently in such a mess is because the likes of Tony Edwards used to work for them.

That is not to say that Mr Edwards does not make some good points. With such an open goal as MoD equipment procurement, even in a meagre production of 24 pages it would be almost impossible not to score the occasional hit. But what is lacking is any sense of intellectual coherence. Essentially, all that Edwards manages to do is assemble a list of major projects, current and future, put a notional price on each and then add up the price tags. A supermarket check-out girl could have done nearly as well.

What Mr Edwards does not do is explore to any extent what he would have the Armed Forces do, what they are capable of doing (not the same things) and what then they would need to achieve those things.

Bizarrely, there is barely any recognition that we are a nation at war, with the Armed Forces actually fighting a real enemy in real battles. Instead, Edwards's substantive point on Afghanistan is to complain that:

… our defence capability which supports our foreign policy is being degraded by the extended period of overstretch of our armed forces – the operations in Iraq and Afghanistan have lasted longer even than the whole of World War II.

So, if we have got this straight, the operations in Iraq and Afghanistan have "degraded" our defence capability, which "supports our foreign policy". And those operations were not – and are not – in support of our foreign policy? Yet, in a monumental example of schizophrenia, this same Mr Edwards also complains that, "recent reports from the US show serious dissatisfaction with the British contribution to both the Iraq and Afghanistan operations. "

The litmus test on all this, however, is Mr Edward’s attitude to the FRES project. This, he sees as "fast becoming a national disgrace." Then, on the one hand, he points to "many outsiders including the Wiltshire and Oxfordshire Coroners" who have "spoken critically of the vehicles in which we send our troops to war."

On the other hand, he complains that, "Somehow we have managed to turn a fairly straightforward requirement for new vehicles into a "complex system" – Future Rapid Effects System (FRES) – which has only served to cause delay and incur unwarranted cost." FRES, he claims,

… responds to a wish to replace all fighting and support vehicles with a high-tech modular family of vehicles connected with a computer-controlled digital wireless network. On the way the MoD even managed to award £100 million to a company more usually associated with road and railway contracts. So, after many years of expenditure the concept of FRES has been put aside and instead we are going on an ad-hoc buying spree in response to desperate short-term requirements. This approach has created a new challenge – how will this collection of vehicles procured under Urgent Operational Requirements (UORs) be integrated later into the core defence procurement budget?

Those who have followed this saga through this blog will immediately see that Edwards is complaining that we did not buy into the FFLAV concept or one of its successor projects. But, with the MoD mercifully not having done so, he further complains that it has gone on an "ad-hoc buying spree in response to desperate short-term requirements." Thus, we have the MoD responding to genuine operational needs, with a specific class of vehicles - entirely different from the class originally proposed, which was and is unfit for counter-insurgency operations – and this is dismissed as an "ad-hoc buying spree".

Interestingly, this was exactly the same line taken by Bill Kincaid, another MoD escapee, about whom we reported earlier. This, clearly, is the perceived wisdom amongst the MoD rearguard, obviously from the same line of thinking that in 1935 insisted that Royal Tank Corps officers were issued with horses.

The worst of it all is that The Daily Telegraph, having bought uncritically into the UKNDA line with a news story, today publishes a supportive leader, telling us that, "The choice is clear on defence funding." Its view is that, "Britain must either continue with interventionist foreign and defence policies and fund them properly, or retrench to a purely reactive position."

Thus does it fail completely to recognise that it is, in supporting the UKNDA line, arguing for a diversion of funds from exactly "the interventionist foreign and defence policies" that it purports to support. It wants instead to inject massive capital funds into projects that have absolutely no relevance to those policies, leaving operations starved of equipment and capabilities.

Therein lies one of our major problems. On defence, as with so many other things, we need an informed, constructive debate. Instead, we get a miasma of ill-informed comment, based on tired dogma expressed as received wisdom, without any pretence at exploring or understanding the underlying issues.

And this is from a newspaper that once employed Lidell-Hart as a defence correspondent.