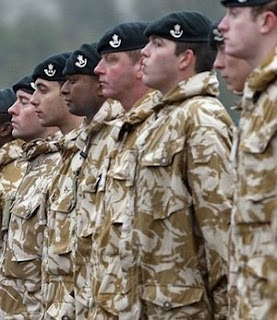 One can quite understand the level of response to the affront caused by the recent Moslem demonstration in Luton, during the parade of the 2nd Battalion, The Royal Anglian Regiment, celebrating their recent return from Iraq.

What is less understandable and entirely unacceptable is the torrent of media interest in imagined threats and their neglect of real and important issues. We thus have an obsessive coverage of global warming, the current preoccupation being the supposedly catastrophic rising sea levels, contrasted with an almost lack of interest in strategic defence issues.

Yet these issues are of far more importance in both the short-term and the longer term, and impinge on precisely the issues raised during the Luton demonstration, to whit the role of our armed forces, and their presence in such places as Iraq and Afghanistan.

We see almost an infantilisation of the media, to the extent that a defence spokesman like Liam Fox will get far more coverage for his pronouncements on the Luton demonstration than he ever would on the fundamentals of defence policy. Furthermore, no eyebrows are raised when he and other politicians fail to respond to issues raised, which point to serious failings in our policies.

That much is evident from the lack of response to an important piece published yesterday in The Daily Telegraph by Thomas Harding. It retails complaints by a serving officer about the "paucity" of equipment for troops, which is hampering the Army's ability to train for operations.

The source is Col Patrick Sanders, CO of the 4th Battalion, The Rifles. He recalls how his troops, before deployment to Basra in 2007 lacked the knowledge of how electronic counter measures (ECM) kit affected radios. This meant that during their first battle there was no communications with the company on the ground. Furthermore, he complains that his battalion was only given two weeks to train on the remotely operated machine guns on Bulldog armoured vehicles.

His more general comments, though, are extremely significant. He states that urban warfare was likely to be where future conflict is based and thus argues that the military "must invest in proper training facilities and equipment over and above the limited ones we already have". He also calls for battle groups – the core unit structure employed on these operations - should spend longer training together for better cohesion before operation to avoid the "ad hocery" of coming together during conflict.

Anyone who has studied these issues will immediately recognise the problem – to which we alluded in our previous piece. The heart of the problem is the need to accommodate the conflicting and incompatible demands of training the same Army to conduct conventional warfare and counter-insurgency operations. The two simply cannot be done, yet since we do not have a force big enough to maintain specialist formations for each roles, the Army is being asked to do the impossible.

Col Sanders also touches on the equipment issue, noting that, in addition to a mass of enemy attacks soldiers suffered appallingly in the heat which sometimes reached 72°C inside Warrior armoured vehicles. "Vehicle crewmen, naked in their turrets, collapsed, vomiting and delirious," Col Sanders said. "Radio communications became almost impossible as everyone was slurring so badly. At one point it looked doubtful if we would have enough surviving crewmen to drive our vehicles back."

This was actually something that was graphically portrayed by Michael Yon at the time, except that no one took a blind bit of notice. Essentially, though, the Warrior – without air conditioning, was potentially more lethal than the enemy.

This again points to the same conflict. An armoured vehicle, designed and built for conventional warfare in central Europe was being used for counter-insurgency warfare in a hot climate – a purpose for which it was never intended.

The substantive issue, however, is the training requirement. In terms of a conventional or "future" war, the demand is for highly specialised mechanised infantry, endowed with a very high level of technical skills and capable of operating sophisticated electronic equipment and advanced weapons systems, all as part of a huge formation capable of co-ordinated mass manoeuvre.

Crucially, proficiency required an equally high level of training, plus constant rehearsals and exercises, all to keep skills current and maintain unit cohesion – especially given the relatively high churn rate in the infantry and the low skill base of recruits.

In such an Army, training is a full-time job and one that cannot be neglected. So specialised is the task that training and deployment for entirely different counter-insurgency tasks, in two different theatres, could not help but impose enormous strains on a relatively small Army.

It is this, more than anything to which General Dannatt was referring when in 2007 he so volubly complained of Iraq plus Afghanistan breaking his Army.

What he did say was that it is not the operations, per se that are causing the problem. Maintaining what amounts to two reinforced brigades in the field, even with manpower levels under 100,000, should present no insuperable difficulties. It is operations, plus the pressing need to maintain the "normal" training cycle – to maintain his "balanced force", as Dannatt likes to call it – which causes the problem.

Stresses had been considerably exacerbated by the roulement system, where complete units were rotated into theatre for six months, before being returned. With gaps between each operational deployment of two years under the so-called "harmony guidelines", this created a planning nightmare.

But the greater problem was the six months needed for the specialist pre-deployment training that each unit needs, and the period of "deprogramming" afterwards. Cramming in the "proper" training for the balanced force capability, and then having to rebuild the skill sets and currency after they had been lost during operational deployments and their training cycles were extremely problematical. In fact, this is what is breaking the Army.

One would like to think that, pace the 1930s when the media could host adult discussions about defence, that at least one of the etiolated excuses for a newspaper could host a serious discussion on this issue. But this does not look possible. Although the media can spare no end of space for "climate change" and endless prattle about celebs, it seems that it has opted out of the real world and has retreated into a second childhood.

Soon enough, though, a big bad man will come along and steal their sweets. And then all they will be able to do is cry.